BRITS are set to bake in another 31C scorcher today after the hottest September day in four years.

Families flocked to beaches and parks yesterday to make the most of the soaring mercury in what is likely to be the last gasp of summer.

Londoners are seen enjoying a mini heatwave in Hackney Marshes[/caption]

Sunseekers cooled off yesterday in a 30C scorcher at beaches in Bournemouth and Southend.

Yesterday has been the hottest September day since 2016 when temperatures peaked at 29.6C.

People row hired boats as they enjoy the Autumn sunshine on the River Nidd in Knaresborough, North Yorkshire[/caption] 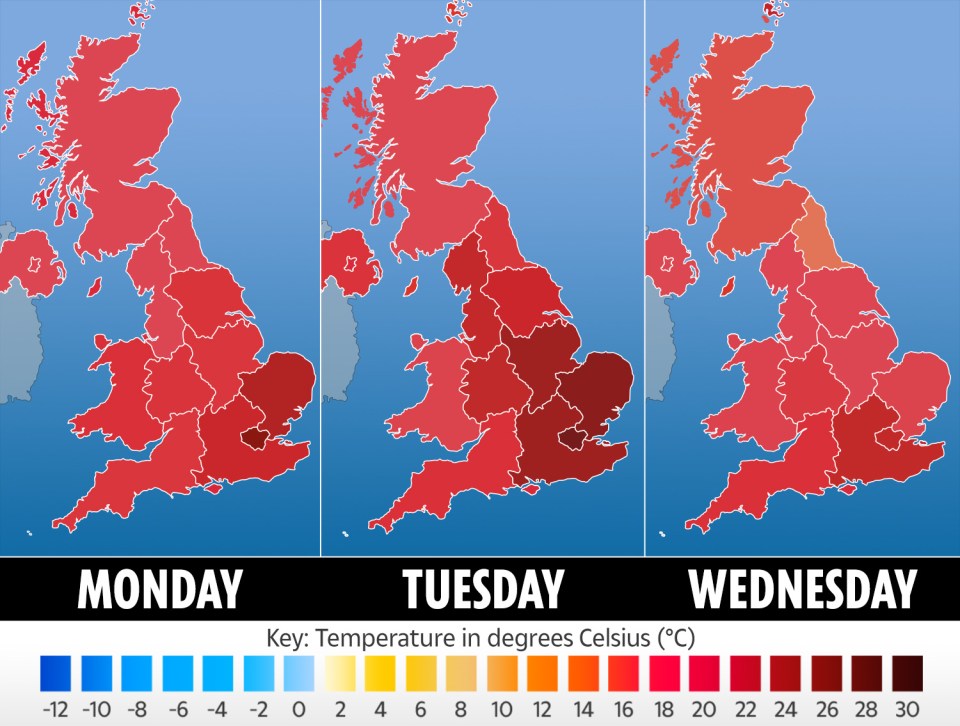 The mercury will be highest in southern parts of the UK, but most of the country will see a spell of warmer weather over the next few days, the Met Office said.

The current warm spell will be the longest in September since 2016, when temperatures reached 34.3C at Gravesend on September 13.

And today will be even hotter, with 31C predicted for southern parts of England.

He said: “On Monday and Tuesday temperatures in Northern Ireland and Scotland will be in the high teens to low 20s but with cloudier skies at times, and the odd shower. Meanwhile England and Wales will be sunnier, especially today with temperatures widely above 25C.

“It’ll turn hot in southern and eastern areas with temperatures reaching around 30C in a few spots, possibly 31C on Tuesday.”

Most parts of the country “will be generally dry and sunny”, according to forecaster John Griffiths.

He said that “much of England and Wales by the afternoon will be dry warm and sunny if not even locally very warm” and there is the potential for a top temperature of 30C in the south east of England.

A woman paddle boards on the River Cam in Cambridge[/caption]

Beachgoers soak up the sun at Lyme Regis in Dorset[/caption]

A sunbather relaxes at Hyde Park in London[/caption]

A group gathers at Bournemouth beach[/caption]

Friends pose for a photo together at Warleigh Weir[/caption]

Sun seekers relax on the sand in Leigh-on-Sea[/caption]

Sunbathers enjoy the hot weather on Primrose Hill in London[/caption]

Mr Griffiths said:”Tuesday we’re still looking at highs of 30 somewhere in the south east maybe even a spot of 31, but it will already be cooling off in some south western areas.

He added: “Across Scotland it will actually be a warmer day for many on Tuesday.

“There’s going to be the potential for a few showers around in some western areas and one of two of them could be heavy and the odd rumble of thunder but they’re going to be very isolated where they do occur. “

There could be highs of 27 or 28 again on Wednesday, but as we head towards the end of the week the heat will begin to move away and temperatures will drop to the low 20s in the warmest parts, Mr Griffiths said.

The meteorologist said: “It’s not that unusual for this time of year, we quite often get warm spells of weather in September,” but these temperatures will still be some way off the highest September temperature ever recorded, which was 35.6C on September 2, 1906.

The hot weather comes as rules on socialising are tightened across England in a bid to halt the growing numbers of coronavirus cases.

A woman relaxes at Primrose Hill in London[/caption]

People out and about in Manchester as temperatures soar[/caption]


Married teacher, 35, 'romped with pupil, 15, in her favourite sex position'


Diner turned away from steakhouse for wearing 'chavvy' clothes


Parents of missing girl, 17, charged with murder 7 weeks after disappearance

Since Monday, it has been illegal to meet in groups of more than six people with the threat of fines for anyone found flouting the law.

The new rules apply both inside and outside, meaning that large groups in parks will be banned from meeting together in the heat.

The September heat follows on from an August heatwave which saw temperatures top out at 34C for six days running last month.

A horse-rider enjoying the sunny weather at Saltburn-by-the-Sea, North Yorkshire[/caption]

What channel is Below Deck on and where can I watch in the UK?

Bill Gates says schools should reopen despite the coronavirus