Tory MPs have clashed with Manchester mayor Andy Burnham over his claims that it would be ‘impossible’ to lift lockdown restrictions in just one borough ahead of a review today.

A major incident was declared by authorities in Greater Manchester this week following a rise in the number of coronavirus infections and new measures were introduced.

This meant people from different households were told not to meet each other inside their homes and gardens while they were also banned from mixing in pubs, restaurants and other hospitality venues.

Labour mayor Mr Burnham said on Wednesday it would be ‘impossible’ to lift stricter lockdown restrictions in Wigan despite the borough having the lowest infection rate in the metropolitan county. 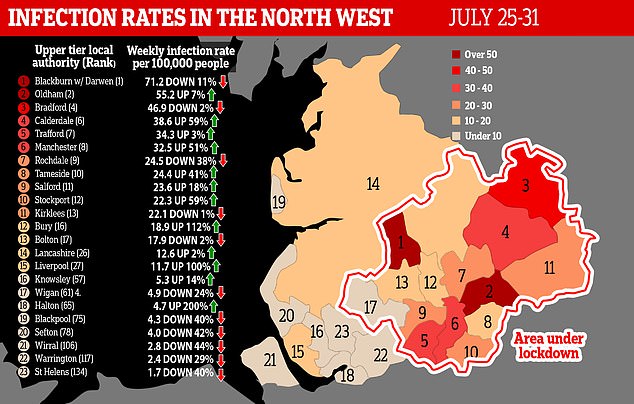 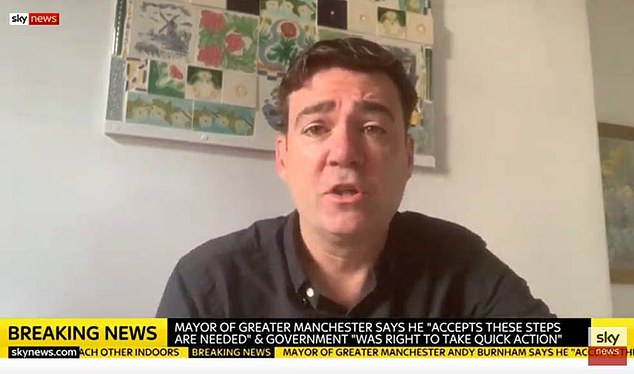 However, furious local Conservative MPs took exception to his comments and have written to Health Secretary Matt Hancock, claiming Mr Burnham’s ‘one size fits all approach’ is ‘not only wrong, but dangerous’.

They added that lockdown measures in Leicester were only applied in certain areas, and were lifted gradually when it was deemed safe to do so.

That in turn sparked an angry response from the mayor, who said it was ‘so self-serving to politicise a serious public health issue like this’.

It comes as findings from a review of the current rules affecting parts of East Lancashire and West Yorkshire, as well as Leicester and Greater Manchester, are set to be made public today.

It read: ‘We are writing to you to express our grave concerns about the comments of The Mayor of Greater Manchester, Andy Burnham, regarding the recent measures put in place to combat COVID-19 across Greater Manchester in his press conference on the afternoon of Wednesday, August 5. 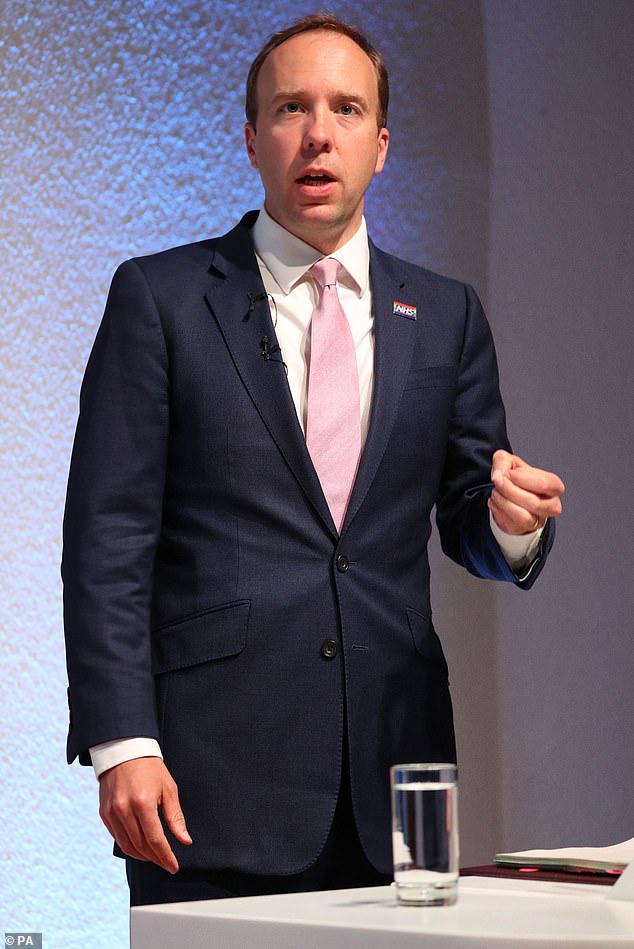 Furious local Conservative MPs took exception to the mayor’s comments and have written to Health Secretary Matt Hancock, pictured, claiming Mr Burnham’s ‘one size fits all approach’ is ‘not only wrong, but dangerous’

‘During the press conference, Andy Burnham was quoted by Manchester Evening News journalist Jen Williams, stating that it was ‘impossible’ to lift the restrictions in any single borough, implying that the new Greater Manchester wide COVID-19 measures must remain in place across the whole conurbation, even in communities that may have not registered a single case for weeks, until the outbreak has been dealt with everywhere across the metropolitan county. This would be an unacceptable approach.

‘Furthermore, in the neighbouring county of Lancashire, and the neighbouring metropolitan county of West Yorkshire, the new measures only came into force in the parts of those counties worst affected by COVID-19. It is perfectly possible to vary the measures on a local authority by local authority basis according to the evidence available, as has already been demonstrated.

‘The strategy pursued by Andy Burnham of a ‘one size fits all’ approach across the whole of Greater Manchester, irrespective of local infection rates, is not only wrong, but dangerous. This strategy risks spreading resources too thinly across the whole conurbation, including in areas with few or no cases.

‘A more sophisticated approach targeting resources at the areas with the greatest need is required. Measures must be taken on a borough by borough basis, and on a town by town basis in boroughs, where there are only one or two coronavirus ‘hotspots’, but the rates in other parts of the same borough are low. 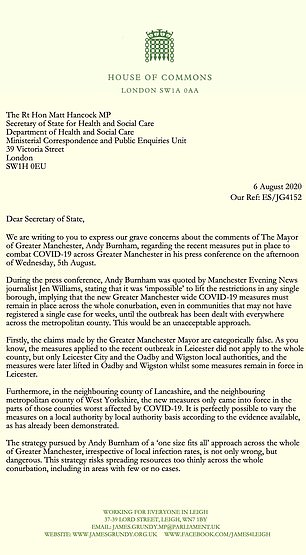 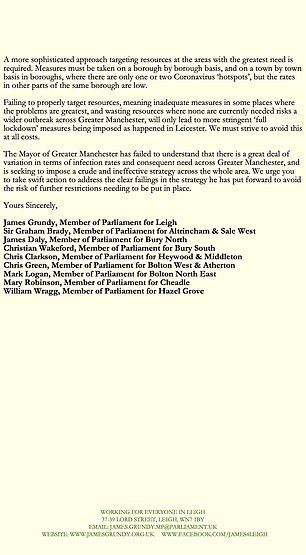 The MPs added in the letter, pictured left and right, that lockdown measures in Leicester were only applied in certain areas, and were lifted gradually when it was deemed safe to do so

‘Failing to properly target resources, meaning inadequate measures in some places where the problems are greatest, and wasting resources where none are currently needed risks a wider outbreak across Greater Manchester, will only lead to more stringent ‘full lockdown’ measures being imposed as happened in Leicester. We must strive to avoid this at all costs.

‘The Mayor of Greater Manchester has failed to understand that there is a great deal of variation in terms of infection rates and consequent need across Greater Manchester, and is seeking to impose a crude and ineffective strategy across the whole area.

‘We urge you to take swift action to address the clear failings in the strategy he has put forward to avoid the risk of further restrictions needing to be put in place.’

In a scathing response, Mr Burnham accused the MPs of ‘putting politics before public safety’.

He wrote: ‘I have seen the letter that you have today sent to the Health Secretary. Given the efforts I have made to make myself available to you all throughout this crisis, it is disappointing to say the least that you did not seek to discuss your concerns with me first before placing your letter in the public domain. You have accused me of pursuing a ‘crude and ineffective strategy across the whole area’. 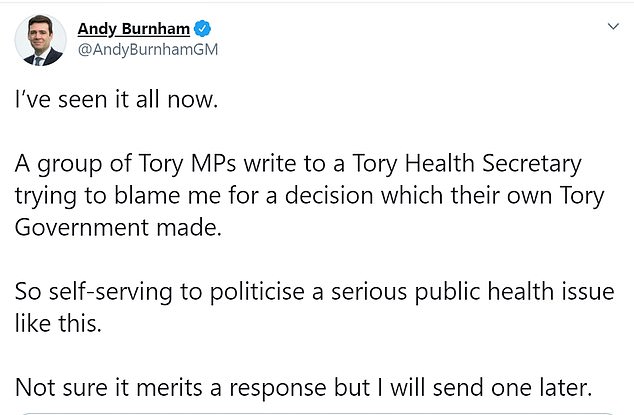 The letter sparked an angry response from the mayor, who said it was ‘so self-serving to politicise a serious public health issue like this’

‘May I remind you all that the strategy you describe, of imposing restrictions across the whole of Greater Manchester, was not my decision but one taken by your own Government and put to me late last Thursday.

‘That same Government, of which you are all part, has today chosen to uphold that decision following a review of the latest evidence.

‘In choosing to write to me in the way that you have, it is clear that you all disagree with your own Government’s decision but do not have the courage to say so.

‘Instead, you are clearly seeking to deflect blame and politicise this issue. I would consider this fairly low behaviour at any time. But in the middle of a global pandemic, when I am trying to work across party lines and provide cross-party support to your Government for the difficult decisions it is having to take, it is beneath contempt.

‘I can assure you that it was not easy to support your Government, particularly when the communication of the new policy was so confused. But I did so based on the evidence and the need to put people’s health first. Early action now may prevent a much more restrictive lockdown later down the line.

‘You question why approaching this on a Greater Manchester basis is justified. It is because we have rising numbers of cases in nine out of our 10 boroughs. Those same boroughs are inter-connected. Most people routinely cross borough boundaries on a daily basis.

‘Even in places where case numbers are low, they are on the doorstep of places where they are much higher. Therefore, at this time, I do not believe it is possible to look at any borough in isolation and this is the point I was making to the Manchester Evening News.

‘If the facts change, and we were to see decreases in a cluster of boroughs, then of course this could be reviewed. You may recall that I made this point clear on the MPs’ call last Friday which many of you joined.

‘I will continue to do whatever I can to protect the health of our residents, no matter how difficult. If that includes working across political divides with a Conservative Government, I will do it and won’t be deflected by local Tory MPs putting politics before public safety.’

I’ll never know if op cancelled during coronavirus lockdown would have stopped my cancer...

Yellowstone season 4: Is Yellowstone in danger amid Paramount shake-up?