RESIDENTS have been evacuated from their homes after a massive 100-acre wildfire broke out in Surrey.

Homeowners in Sunningdale near Ascot were told not to come back until later this morning at the earliest while fire crews battled the blaze that earlier engulfed Wentworth golf course.

An aerial view of the wildfire that began on Chobham Common, Surrey, but quickly spread to Wentworth golf course[/caption]

Golfers Sophie Powell, Cara Gainer and Gabriella Cowley and their caddies had to quickly evacuate as a ‘wall of flames’ approached[/caption]

The blaze started at 12.25pm yesterday in Chobham Common before spreading to the golf course, halting play in the Rose Ladies Series Grand Final tournament.

Smoke from the inferno could be seen as far away as central London, as firefighters struggled to quell the raging blaze amid soaring temperatures.

With the fire showing no sign of being brought under control, about 60 houses, home to about 100 people, have been evacuated from in and around Heather Drive.

Surrey Fire and Rescue service said yesterday: “The fire on Chobham Common is an ongoing incident with significant numbers of emergency services on the scene who are likely to remain there for some time.

“Some local roads in the area remain closed to allow crews to work and for public safety.

“Please continue to avoid the area.

“A number of homes in the area have had to be evacuated for safety reasons.

“Any resident that has been evacuated should not return to their homes until it’s safe to do so — this will be tomorrow morning at the very earliest.”

The service earlier said it sent 10 fire engines, two water carriers and 10 other vehicles to tackle the blaze. 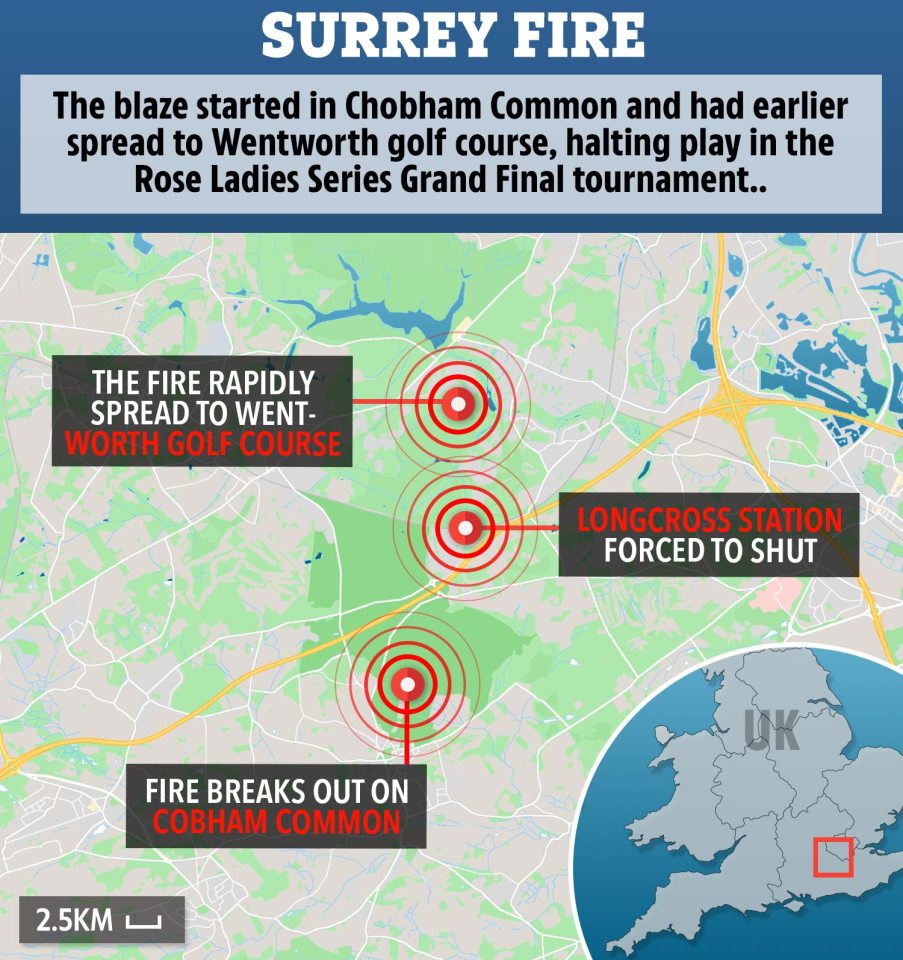 Griff Ryan, 23, lives in Sunningdale near to the fire, and said the fire began with a “strange light” at about 1pm before seeing smoke and then later a “wall of flames”.

He said: “Smoke got gradually worse and ash began falling into our garden.

“Now standing on Chobham road. At around 5pm fire still wasn’t visible from the road.

“Over about half an hour it’s become visible and now can see a wall of flames down towards the railway line.

“Other residents I’ve spoken to have said it’s the worst they’ve seen in 30 years.”

Surrey Police said: “Surrey Fire and Rescue are working hard to get the fire under control, and we are assisting with evacuations and road closures.

“If you are on the common you need to evacuate immediately, following instructions from the police and fire officers on the ground.

“If you decided to walk off the common, but have left a vehicle in one of the car parks, please message us immediately so we can account for you.

“The fire is travelling fast due to the wind, and there is also a risk of reduced visibility due to smoke.”

As flames spread across the West Course at the prestigious Surrey club, play was stopped as the Rose Ladies’ Series Grand Final neared its conclusion.

It is understood the golf was suspended for the rest of the day with plans to continue the final round at 9.30am tomorrow morning.

According to Sky Sports News, no one has been injured on the golf club but everyone was asked to leave the West Course, one of three courses at the club.

Dramatic photos captured the smoke at the course near Virginia Water where temperatures hit 36C on Friday afternoon.

Sunningdale Golf Course, just three miles away, also stopped play and ensured everyone was in a safe space in case.

Felicity Johnson was on the ninth hole when she spotted players on the tenth tee box waving dramatically, at first thinking they were calling for a referee.

She told Sky Sports News: “I was just on ninth green, the group ahead had teed up and then we could see a lot of smoke.

“We could see it moving in the distance and it seemed to get closer pretty quickly.

“We waited five to ten minutes and it was the noise that was pretty scary.

“We all know how fast fire can travel and then we saw ash landing on our clothes.

“We all had to wait at a safe distance, a few green keepers and club staff were there quickly.

“I’ve been on the European Tour since 2006 and played in Australia with the bush fires around us which was bad but I have never seen anything like this just turning up on the day.”

Smoke can be seen billowing on Chobham Common, Surrey[/caption]

The wildfire then ripped towards the golf course[/caption]


Landlord advertises garden 'shed' to live in for £1,500-a-month

A spokesman for Surrey Fire and Rescue Service said: “We received a call this afternoon around 12.25pm to a report of a fire on Chobham Common.

“Ten fire engines have been sent in total, alongside multiple specialist vehicles, with the first arriving at the scene around 12.35pm. Approximately 41 hectares of grass and undergrowth are alight.

“Crews remain at the scene tackling the fire.”

Smoke from the fire was visible well over ten miles away and had earlier been mistakenly thought to be coming from Heathrow airport by some on social media.