PUBS have opened up their doors bright and early today – with the first orders from 6AM for Super Saturday.

Thirsty Brits turned up ready for an early morning drink as their locals reopened after more than three long months.

Boozers tuck into a pint in Clapham [/caption]

Eager punters thrilled to reunite with their pals and have a pint have waited for this day throughout the coronavirus lockdown.

But the Prime Minister has urged Brits to be “sensible” and stick to the rules, despite the restrictions being relaxed.

Pubs shut their doors when they were ordered to temporarily close amid the pandemic, but the Government gave the green light to start serving again today.

Restaurants and cafes are also allowed to start serving customers again and not just for takeaways.

Some of the other rules included to keep people safe from Saturday will include:

Pubs couldn’t open until 6am – just in case anyone wanted to try and get a late-night pint in.

And it will depend on the licence that each pub has as to when they can actually serve you a drink – so some may not be flinging open their doors quite so early.

The PM’s spokesperson said this lunchtime the change was “a sensible precaution just to stress that pubs shouldn’t open at midnight.

“The reopen date should be in the daytime on July 4th.”

Wetherspoons planned to open 750 pubs at 8am, but unlike other boozers you can’t currently book tables in advance.

We’ve also reported on a new map showing you which beer gardens will be open this weekend.

Pubs have been kitted out with screens, posters and floor markings to help keep customers safe.

But Greene King pubs are not to due to return and welcome customers until Monday – to give landlords and managers enough time to make sure branches are “Pubsafe” – or Covid-19 secure.

And some police forces – including Devon and Cornwall – have said punters would have a two hour limit on staying in any establishment.

Chief Constable Sawyer said today: “Our licensed and hospitality industry will re-open on Saturday, but it will be a very different experience for those going to a pub or restaurant.

“I strongly encourage you to book your visit and you will be restricted to two hours in an establishment.”

However, No10 stressed this would not be a rule implemented across the country, and it would be down to different forces to implement their own rules.

A spokesperson said it was “not part of the regulations… pubs and restaurants in particular do sometimes put time-limits you can have a table for.” 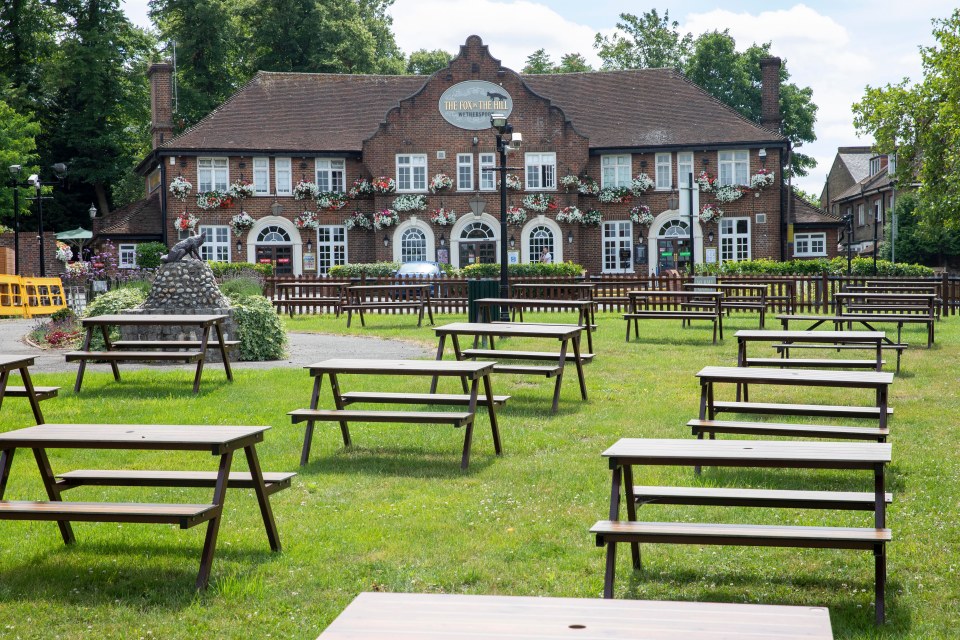 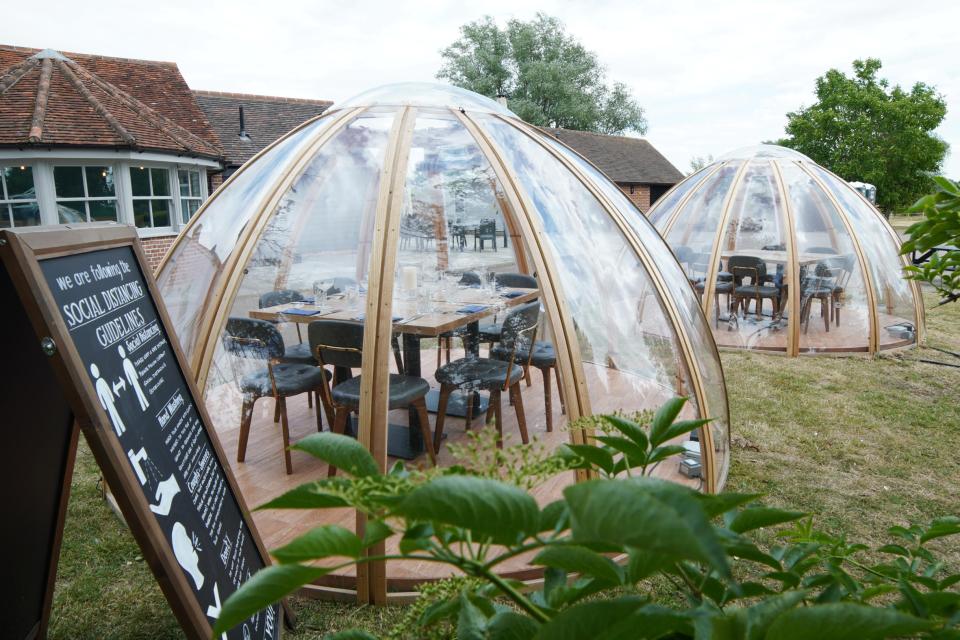 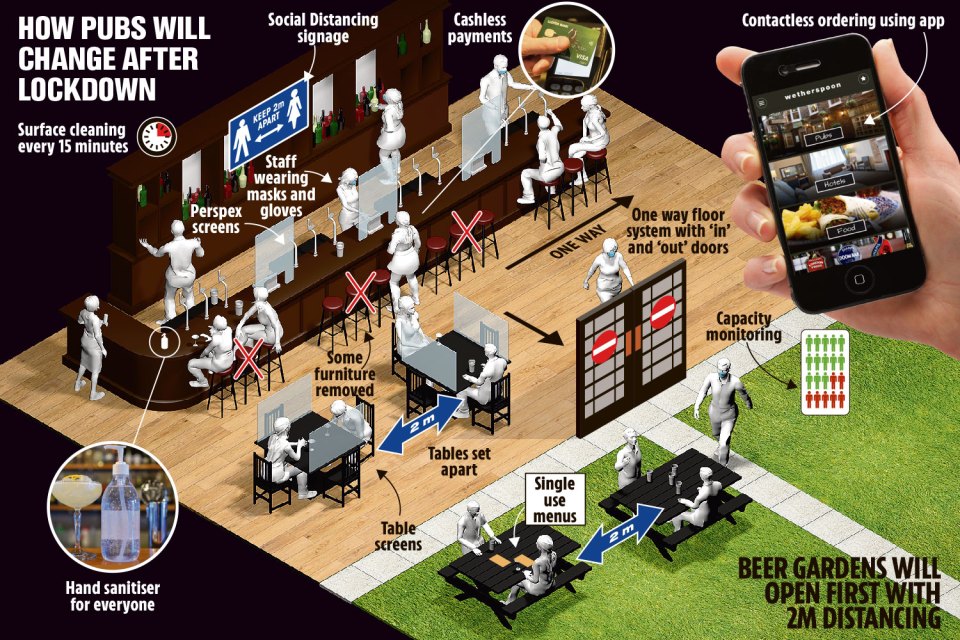 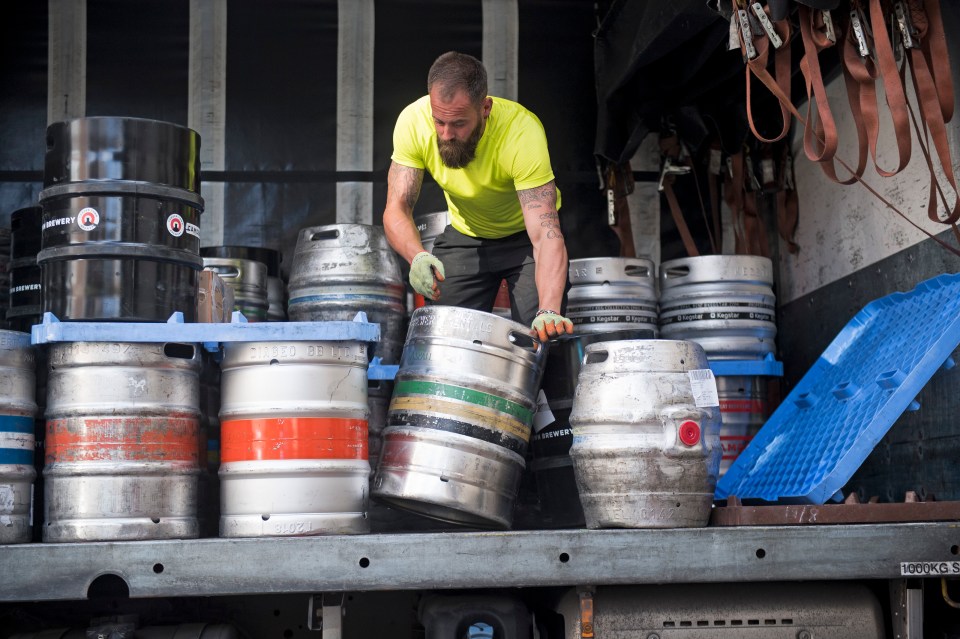 But going back the local on Saturday won’t be the same as it was before – you’ll have to stick to tough new rules to keep everyone safe during the coronavirus pandemic.

Mr Johnson bluntly told people not to “blow” it, as distancing is still in place, groups of more than six still cannot mingle and masks should be worn in enclosed areas where possible.

He said: “We’ve progressed thanks to the efforts of the British people from an incidence of the disease at about one in 400 a few weeks ago to maybe one in 2,200 today.

“We’re making progress, we aimed for July the 4th, we wanted to set ourselves a target, we think we’re in good shape but my message is let’s not blow it.”

People will have to book ahead to make sure they get a spot in the pub, and in some places order via an app.

Table service will be required, and in many pubs you won’t be allowed to order at the bar.

In larger pubs, the tables will need to be rearranged so that they sit at least a metre away from the next one.

It means boozers will only be operating around 60 per cent capacity, so customers will also be encouraged to book a table before arriving at their local.

STICK TO THE RULES

People will only be allowed to go out to the pub with one other household at a time.

And the lead member will have to leave their contact details with the pub just in case there’s an outbreak, or they end up near someone who later tests positive for the virus.

Those details will be destroyed by the pubs after 21 days.

The Sun revealed this week pubs will be allowed to show the football – but it will have to be on quietly.

Anything which encourages people to raise their voice shouldn’t be allowed – because of the potential to spread the virus through droplets in the air.

And people in Scotland will have to wait a little longer before they can enjoy a cold pint at their pub – as beer gardens aren’t meant to open until 6 July.

Indoor restaurants and pubs can open their doors from 15 July, too.,

However, many pubs are not going to open up their doors at all on Saturday – for fears they can’t keep people safe.

Some landlords fear they cannot enforce Covid-19 social distancing rules when partying punters flood in for their first pint since March.

Ian High, operations and finance director of Pub Culture, which runs venues in the North East including the Dun Cow in Sunderland, told the Sunderland Echo: “The health and safety of our staff and customers is our top priority.HAVING A RIOT Cops chased and pelted with missiles by mob after trying to stop illegal raveMIDNIGHT TRIM Brits who’ve had no haircut for 100 days rush to reopening salons at midnight24-CARAT SPOILT BRATGhislaine was a spoilt daddy’s girl drawn to power…now she’s in jailCLEANING UP Couple who set up hand sanitiser company just 12wks ago set to make £30 MILLION‘EVIL AS EPSTEIN’Ghislaine Maxwell ‘raped girl 20 to 30 times beginning when she was 14′R-EVEALED Coronavirus R rate goes back up in England – and rises ABOVE one in London

“We are working through the guidelines provided for the hospitality industry and want to make sure that when we open, we are providing the safest possible environment.”

Leading doctors, police and campaigners urged revellers to drink responsibly to avoid ending up injured and in under pressure hospitals.

Some even fear that emergency departments could see as many drunk patients as New Years Eve. 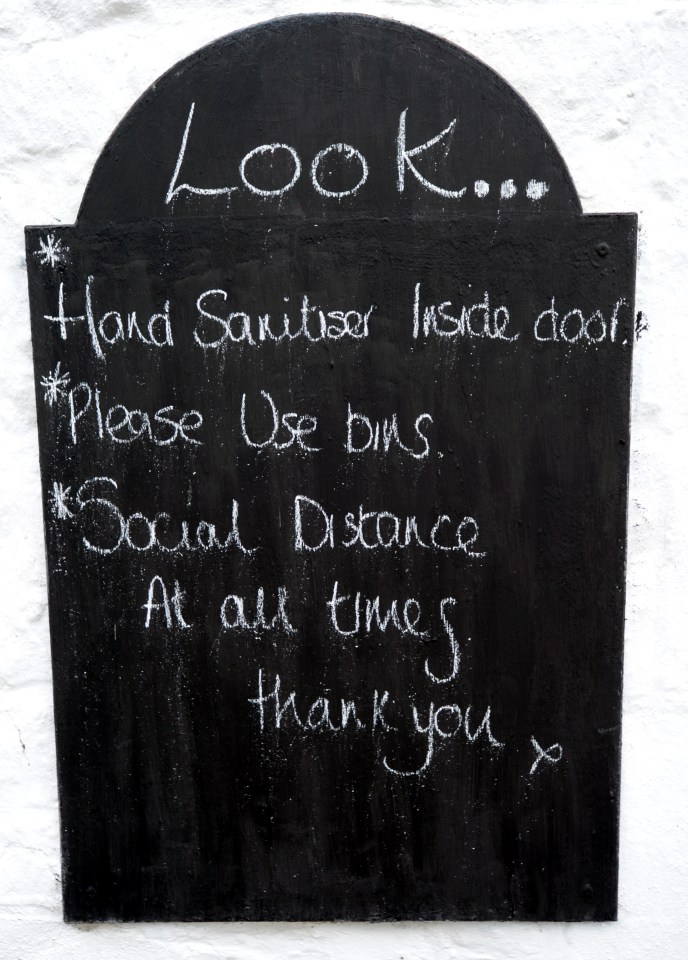 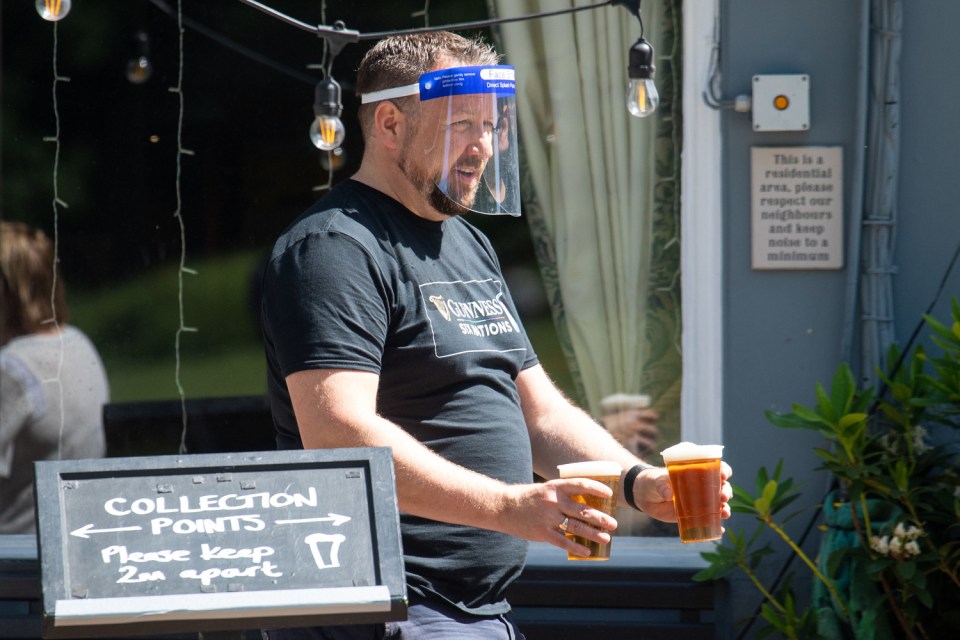 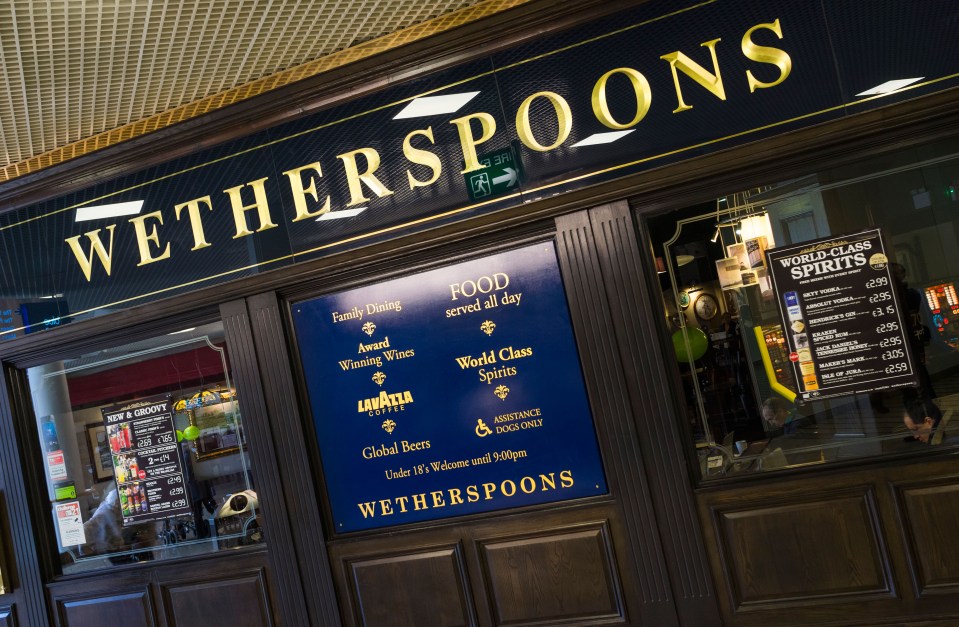 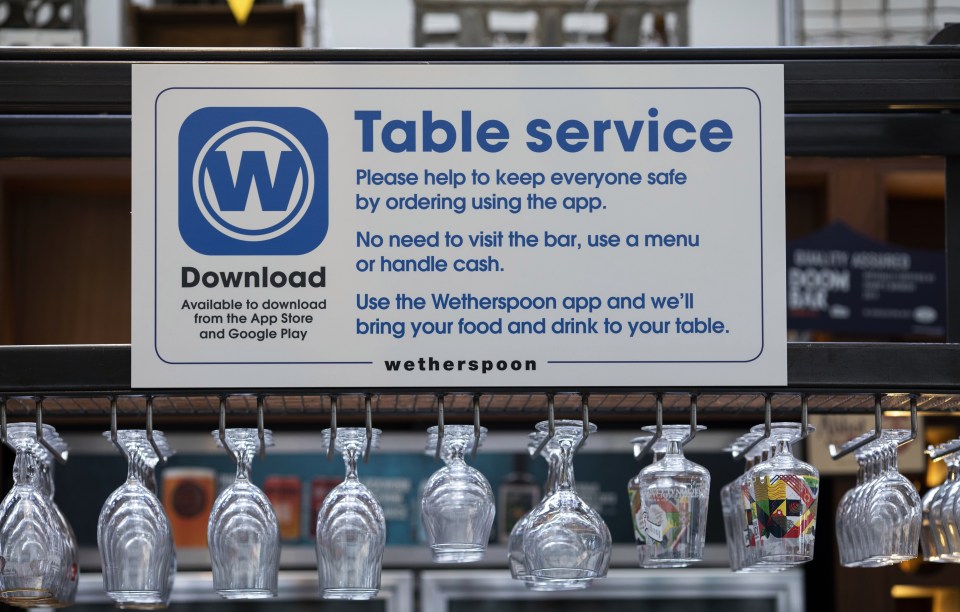 ImageUpload an image file, pick one from your media library, or add one with a URL.UploadMedia Library

I found out my fiancee was a cheat 3 weeks before the wedding, so I chucked her stuff out & partied with her bridesmaids

Coronavirus no longer among 10 biggest killers in England – as bug accounted for just 1.4% deaths in August