THE Saudi Arabian crown prince has been accused of sending a hit squad to Canada to kill a former top-ranking Saudi intelligence official days after the murder of journalist Jamal Khashoggi.

In a 107-page lawsuit filed in a Washington DC federal court against Bin Salman and 24 others, Saad al-Jabri claimed Crown Prince Mohammed Bin Salman “dispatched a hit squad” to Canada in October 2018.

Saad al-Jabri, who worked for Salman’s predecessor, filed a lawsuit on Thursday claiming Bin Salman put a hit on him[/caption]

“(A) team of Saudi nationals traveled across the Atlantic Ocean from Saudi Arabia … with the intention of killing Dr. Saad,” said the lawsuit, which seeks punitive damages in an amount to be determined at trial.

Two of al-Jabri’s adult children are under Saudi detention in an attempt to lure him back from exile in Canada, where he has lived with some of his family members for the last three years.

One of his sons, Khalid Aljabri told The Globe and Mail that two of his siblings were seized in Saudi Arabia this spring and have not been heard from since.

The family worries Bin Salman is holding them as “bargaining chips” to force al-Jabri’s return.

Al-Jabri was a long-time aide to Saudi Arabian Prince Mohammed bin Nayef, who was ousted as heir to the throne in a 2017 palace coup by Bin Salman.

The 61-year-old has access to documents containing sensitive information , including the foreign bank accounts and financial assets of the Saudi royal family, Canadian sources told The Globe and Mail on Thursday.

People with knowledge of the situation told Reuters earlier this year the crown prince fears al-Jabri’s access classified info could be compromising.

Who was Jamal Khashoggi? 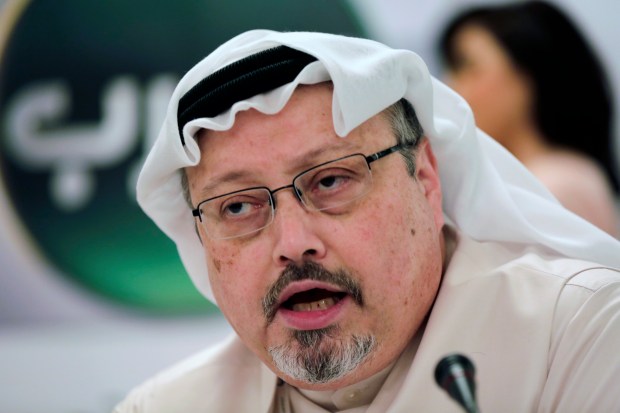 A member of Bin Salman’s alleged hit squad was someone who knew how to clean up crime scenes, the lawsuit says[/caption]

The alleged “hit squad” was comprised of members of the Tiger Squad, a group close to Bin Salam, and they carried two bags of forensic tools.

One member was someone who knew how to clean up crime scenes, the lawsuit says.

Al-Jabri is accusing the crown prince of attempted extrajudicial killing in violation of the US Torture Victim Protection Act and in breach of international law.

Neither the Saudi government media office nor the Saudi embassy in Ottawa immediately responded to a request for comment from The Sun.

Turkish sources told Reuters a bone saw was used to dismember Khashoggi, who was a columnist for the Washington Post.

Khashoggi was last seen entering the Saudi Arabia consulate in Istanbul, Turkey on October 2, 2018, moments before he was ‘tortured and dismembered’[/caption]

MOST READ IN NEWS

LUCKY TO BE ALIVE

FOOT IN THEIR MOUTH

'THINGS ARE NOT GOOD'


Jordan Peterson 'suffering with COVID impacting both his lungs'

Chilling CCTV footage from October 2018 showed the reporter entering the Saudi consulate in Istanbul moments before police say he was “tortured and cut to pieces.”

Saudi Arabia staunchly denied the accusations of a connection to Khashoggi’s murder and at the time insisted it was “working to search for him.”

The CIA later concluded that the crown prince personally ordered his killing, but President Donald Trump refused to implicate Saudi Arabia – a US ally – in Khashoggi’s murder.

Money Heist season 5: Tokyo's ex-boyfriend death to be shown as...