Patients are being asked to phone A&E and book an appointment — instead of just turning up under an NHS trial.

Casualty departments in Portsmouth and London will run pilot schemes of the ‘111-first’ model as early as next week, the chief executive of the NHS said.

Those with life-threatening problems will be told to attend straight away — but those with a broken limb, for example, may be told to wait.

Attendances to A&E have dramatically dropped during the coronavirus pandemic as people have steered clear of hospitals during the lockdown.

But as casualty units become busy again, the NHS is looking at how it can manage patient flow and enforce social distancing in hospitals.

MPs were told two weeks ago an appointment-first system in A&E could help prevent overcrowding.

It comes as leading doctors have warned of the huge backlog of NHS operations and cancer diagnoses as a result of Britain’s Covid-19 crisis. 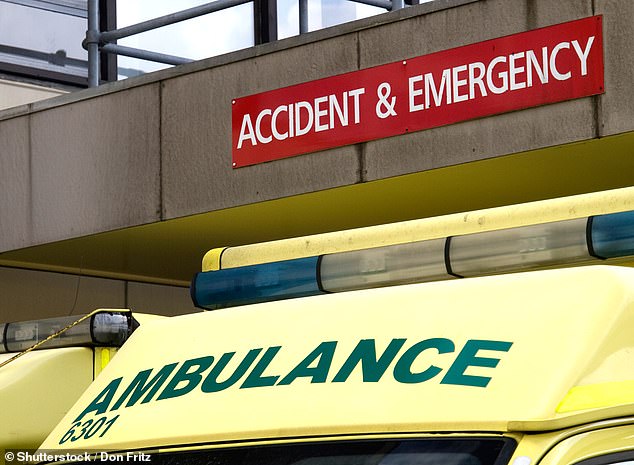 He said: ‘We are piloting various forms of that “call first” [model] in London, in Portsmouth, in other areas too, because we want to make sure that we get the model right.

‘We want to move — as we did before Covid — increasingly to a 111-first model, which ensures that we do everything we can to give appropriate advice to signpost people to the most appropriate place for treatment.’

Patients would ring a number — like the NHS 111 line, which is for patients to ring if they need help but it is not an emergency — as a first point of contact.

Sir Simon Stevens revealed today that the 200-bed Exeter Nightingale site will start screening multiple patients a day starting from Monday to help cope with the growing number of people waiting for tests to find out if they have the disease.

The hospital, originally built for Covid patients in the event intensive care wards were overwhelmed, will be open seven days a week, from 8am to 8pm.

It follows the 500-bed Nightingale in Harrogate, North Yorkshire, which started offering CT scans for suspected cancer sufferers on June 4.

It comes amid fears of a cancer time bomb, with leading charities estimating 2.5million cancer patients have missed out on vital tests and treatment this year because of the coronavirus crisis.

Charities have also warned there could be an additional 18,000 cancer deaths in 2020 because of the number of patients who have been diagnosed too late.

Sir Simon told MPs that a number of private sector hospitals could be transformed into coronavirus-free cancer clinics in the coming months to clear the backlog.

He suggested the Nightingale in Exeter and other dedicated diagnostic and endoscopy suites will be able to see much more patients than standard cancer clinics and said staff will use new types of testing to speed the processes up.

Sir Simon added: ‘The first of those is going to be the Exeter Nightingale which we are going to partly repurpose for non-Covid CT scanning that will begin next Monday and run eight until eight and seven days a week.

‘So yes, this is an opportunity and a necessity, quite frankly to do something quite different in diagnostics.’

NHS statistics suggest thousands of cancers could have been missed due to a huge drop in referrals amid the coronavirus crisis.

The pilot study in Portsmouth will begin this week, with call handlers able to book people into a timed slot to attend A&E.

A second pilot scheme in London is expected to start later this month. It is not clear exactly which hospitals will be involved.

Patients who are deemed to be urgent and at risk of death will still be told to go straight to A&E. People who do not have an appointment won’t be turned away, however.

The aim is to quicken patient flow through emergency departments so people don’t have to wait hours in waiting rooms or worse, corridors.

Amanda Pritchard, NHS England chief operating officer, said that they wanted people who needed to use A&E to do so in ‘as much as possible a planned booking way [so] that we’re avoiding overcrowding’.

She added: ‘However, it’s worth saying that we’re not at the moment envisaging that the 111-first model would be the only way you get to A&E.’

The number of people visiting A&E departments dropped sharply in the early months of the pandemic.

NHS England figures show that the number of people going to A&E in April was 57 per cent lower than the year before, and the lowest on record.

May was only 42 per cent lower than the year before, showing that attendees are creeping up again.

Emergency medicine doctors have said that they will not be able to see the same number of A&E patients as they did before while Covid-19 remains a problem.

It would be impossible to enforce social distancing when there are people waiting for care on trolleys in corridors – as has been the case at the busiest of times.

Katherine Henderson, president of the Royal College of Emergency Medicine, called for an appointment system on June 16.

She told the House of Commons Health and Social Care Select Committee: ‘We need to think about booking into urgent treatment centres, and maybe even emergency departments for particular time slots for somebody who does need to go to the emergency room, say they need an X-ray of a potentially broken limb.’

MPs were told that appointments in A&E departments could become a permanent measure to prevent overcrowding following the pandemic.

Dr Henderson said NHS 111, which has seen an increased input from clinicians during the pandemic, could be used as an initial contact point.

She said that patients could then be offered booked appointments into urgent treatment centres and ‘hot clinics’, where those with known health problems could be directed to a specialist.

‘We were becoming very, very crowded, and we had people in corridors. And the idea that you could have a vulnerable 80-year-old with a hip fracture in a corridor next to someone else who could have Covid is just impossible.

‘So, we cannot let that happen and we need to find a way of making it possible for people to get the care they need where they need it, which doesn’t always require necessarily going to the emergency department.

She said this would need to be carefully considered before being implemented so that it did not exacerbate health inequalities.

During the committee session, which focused on delivering NHS and care services during the pandemic and beyond, the huge backlog of NHS operations was also discussed.

The 2million routine operations cancelled because of the coronavirus pandemic may take up to five years to clear, according to the UK’s top surgeon.

Professor Derek Alderson, president of the Royal College of Surgeons, said it was ‘completely unrealistic’ to think elective surgery will be back up and running anywhere near capacity this year.

Professor Alderson said the only solution was for the NHS to renew its contract with private hospitals to create ‘Covid light’ zones.

He told MPs: ‘I think that dealing with the backlog is not something that’s achievable simply in weeks, you know, we stopped for 12 weeks so we can catch up in 12 weeks – I mean, that to my mind, is completely unrealistic.

‘This is certainly many months, it may take us a few years to catch up.

‘We really do need a programme recovery of surgery and the sustainability of surgery that probably looks at four or five years in order to have a resilient system and take things forward in the best possible way.’

The hospital, originally built for Covid patients in the event intensive care wards were overwhelmed, will be open seven days a week, from 8am to 8pm.

Leading charities estimating 2.5million cancer patients have missed out on vital tests and treatment this year because of the coronavirus crisis.

The infection that could be more deadly for students than coronavirus

Is this the cure for sleepless nights? Scientists believe ear zapper could help banish insomnia

Ennio Morricone dead at 91 – Legendary Hollywood composer behind The Good The Bad...

Simon Cowell accident could have been 'much worse' as he breaks back on electric...

Girl, 10, with bizarre food phobia who only ate white toast...