Quarantine-free ‘air bridges’ are set to be put in place by June 30 which would allow Britons to travel abroad without needing to isolate on arrival.

The UK Foreign Office placed a ban on all non-essential travel to other countries in the middle of March but the regulation is expected to be scrapped in the coming weeks.

However, the Government is set to successfully negotiate deals with some foreign nations, meaning Britons could choose to have a summer holiday abroad after several weeks in lockdown. 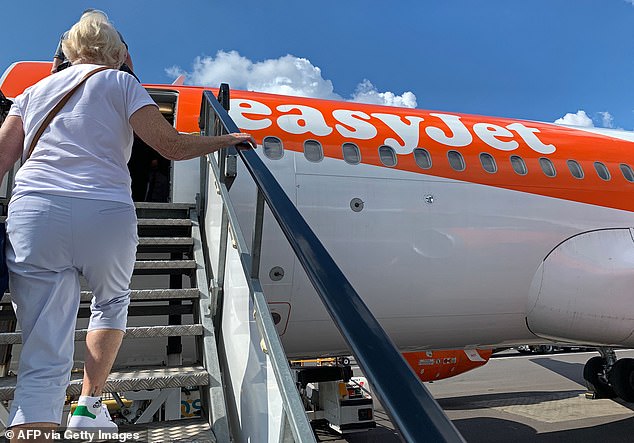 The Times claim that Greece, Portugal and Spain are just some of the countries that the UK could make agreements with, with the Government not choosing to negotiate with the European Union on this matter.

Meanwhile, visits to UK territories abroad such as Bermuda, the British Virgin Islands and Gibraltar are set to be allowed.

However, European countries such as France and the Netherlands are maintaining that all UK residents undergo a compulsory 14-day quarantine period upon entering the country.

Spain are also believed to be considering putting in a similar policy, with its foreign minister Arancha Gonzalez Laya admitting that the country, which is the most popular foreign destination for Britons, is investigating this eventuality. 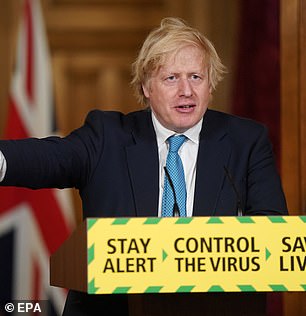 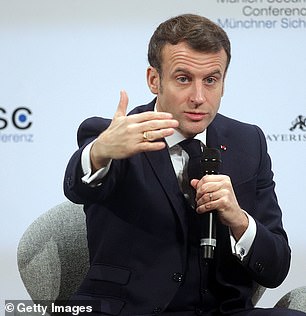 He revealed in the Downing Street press conference on Tuesday: ‘Obviously I will be talking to Emmanuel Macron about all sorts of ways in which we can bring our countries together, making sure that eventually we will be able to travel freely to and from each other’s countries.

‘The same goes obviously for Spain, as soon as we can.

‘The reason for having the quarantine system is very simple – we don’t want to re-import the disease just at the moment when we’ve really got it under control in this country.

‘But we’re certainly looking at air bridges and ways to ensure that people can safely go on holiday eventually.’ 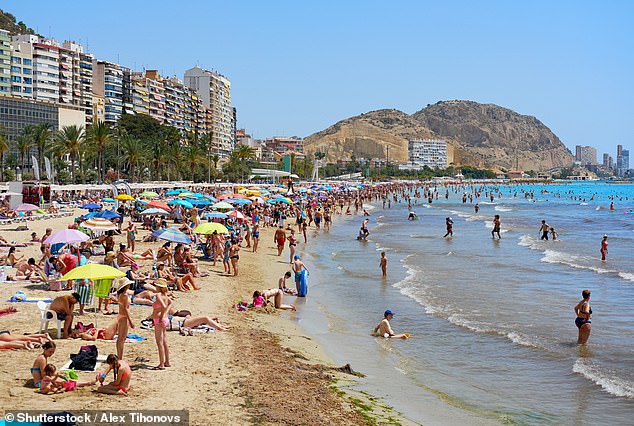 Spain, which is the most popular foreign destination for Britons as it contains sunny hotspots such as Alicante (pictured), revealed it could impose a mandatory 14-day quarantine period for all UK visitors 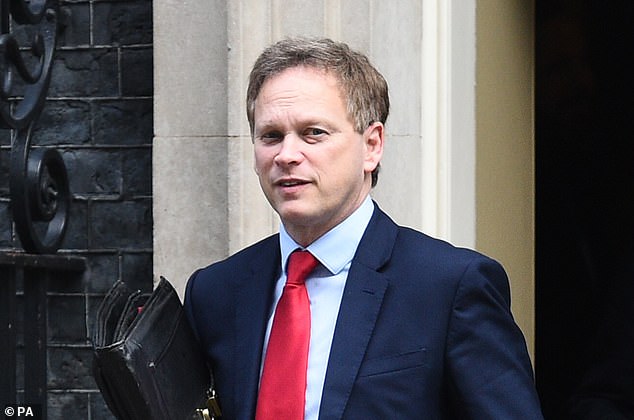 Transport Secretary Grant Shapps added on Tuesday that the UK were close on securing ‘air bridges’ deals with other countries.

The 14-day compulsory quarantine period is a policy also adopted in the UK concerning all foreign visitors – including Britons coming from abroad.

The decision to place mandatory quarantine period on these visitors has angered airline companies, with easyJet, British Airways and Ryanair launching legal battles against the Government.

Furthermore, the Commons Transport Select Committee, consisting of a selection of cross-party MPs, called for the Government to scrap this policy last week.

It is believed the 14-day compulsory period in Britain costs around £650million.

By James Robinson for MailOnline

A mix-up on the government’s new online quarantine form has given the option for travellers entering the UK to declare themselves as being from countries which no longer exist.

Those filling out the Home Office’s website where able to claim they were from places such as Czechoslovakia and the USSR – both of which have not existed for almost three decades.

Other options included on the drop-down list were the German Democratic Republic, known as East Germany, which was reunified with West Germany in 1990, Upper Volta, which is now the West African country of Burkina Faso and Southern Rhodesia, which is now part of Zimbabwe.

The form is part of the government’s plan to force all travellers coming into the UK to self-quarantine for two weeks on arrival. 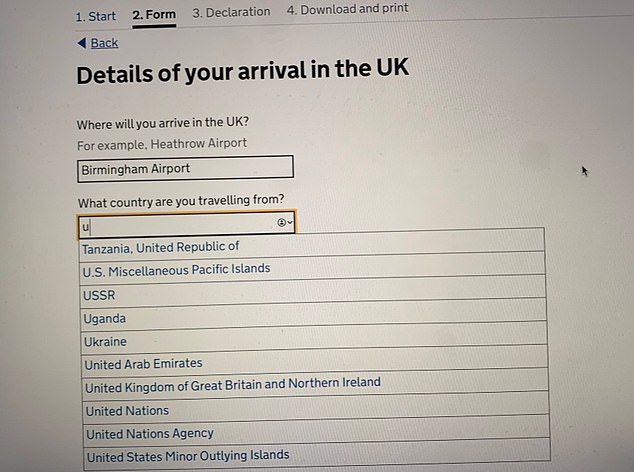 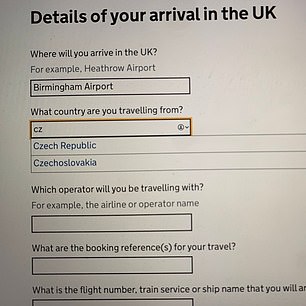 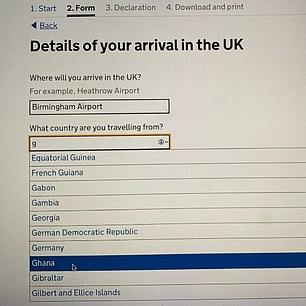 Those filling out the Home Office’s website where able to claim they were from places such as Czechoslovakia and the USSR – both of which have not existed for almost three decades. Other options included on the drop-down list were the German Democratic Republic, known as East Germany, which was reunified with West Germany in 1990. 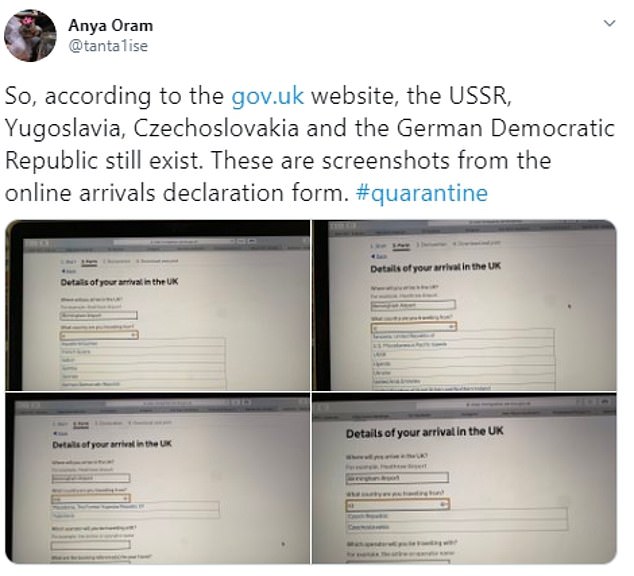 The controversial policy, which has sparked outrage from the travel industry, was brought in last week as the government aims to reduce the risk of a second coronavirus wave.

The Home Office has today said the error on the form was caused when those setting up the page mistakenly used a list of possible countries where people were born.

‘All arrivals could continue using the form given that all countries were still included.’

The government first announced the quarantine policy last month as part of new measures to try and slow the spread of coronavirus in the UK and prevent a second wave of infections.

The policy, which officially came into force last week, makes it law that all people coming into the UK must self-quarantine for at least 14 days, regardless of if they have symptoms.

All UK arrivals – including Britons – must now fill in an online ‘contact locator’ form setting out where they will live for a fortnight. Refusal to do so risks a £1,000 fine. 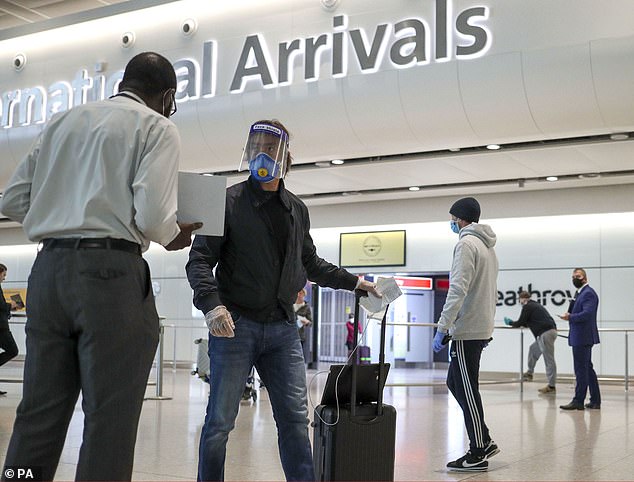 The government first announced the quarantine policy last month as part of new measures to try and slow the spread of coronavirus in the UK and prevent a second wave of infections. Pictured: A person is seen wearing a protective face mask while arriving at Heathrow Airport 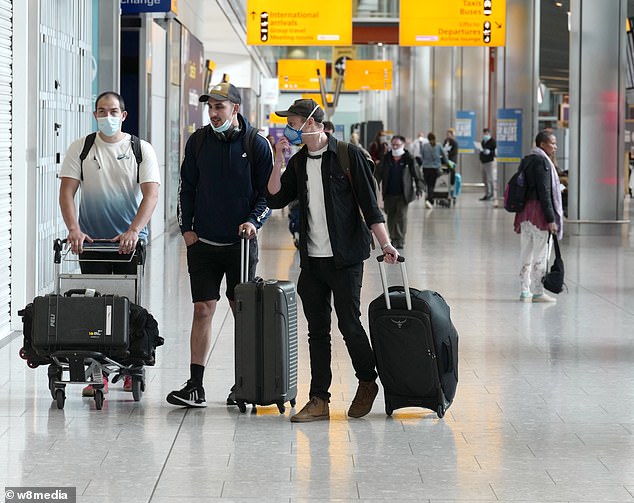 The policy, which officially came into force last week, makes it law that all people coming into the UK must self-quarantine for at least 14 days, regardless of if they have symptoms 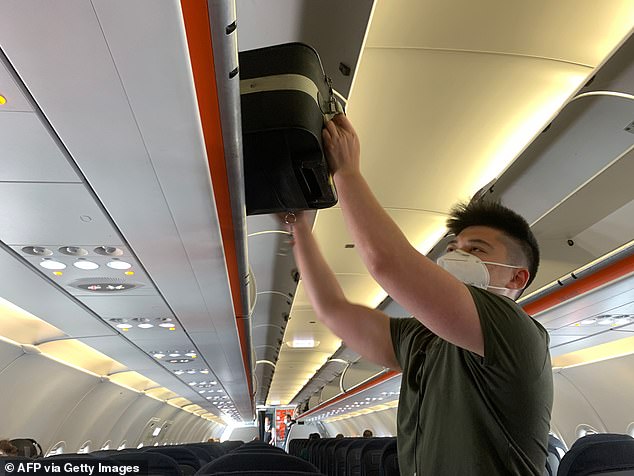 All UK arrivals – including Britons – must now fill in an online ‘contact locator’ form setting out where they will live for a fortnight. Refusal to do so risks a £1,000 fine. Pictured: An EasyJet passenger boards a flight while wearing a face mask

But the policy has sparked fury among bosses in the travel industry, with aviation chiefs comparing the requirement to hanging up a ‘Britiain is closed’ sign.

They have also suggested the wider easing of lockdown will do little to help restart travel if it comes into force.

Meanwhile, more than 200 businesses last month joined a campaign urging the government to drop the idea, while a number of ex-Tory politicians and current MPS have voiced concerns.

Last week British Airways, easyJet and Ryanair launched legal action against the quarantine policy, which it described as ‘flawed’.

The airlines announced they have asked for a judicial review to be heard ‘as soon as possible’, claiming the measures introduced this week will have a ‘devastating effect on British tourism and the wider economy’. 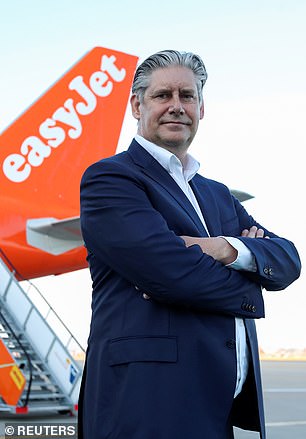 EasyJet CEO Johan Lundgren poses in front of an aircraft of the company at Gatwick Airport, in Gatwick

They said they have seen no evidence of when proposed air bridges – which allow quarantine free travel between the UK and a select number other countries – will be implemented.

Meanwhile, the website mix-up comes after passengers arriving at UK airports on the day it was implemented described scenes of ‘pandemonium’ after the introduction of 14-day quarantine rules requiring them to fill out an online form.

Travellers told of three-hour wait times at Manchester Airport, some said the QR codes they were asked to scan did not work and others claimed ‘snotty’ border guards were saying they should have filled in the arrival form before landing.

Travellers must give their phone number and an address for self-isolation, but about half of passengers arriving at UK airports  said they were unaware of the policy on the day it was introduced.

Meanwhile, Britons eager for a post-lockdown getaway are likely shelving their plans to fly abroad after pictures of crammed easyJet cabins left them horrified.

Passengers on the airline’s first flight in three months yesterday declared it impossible to maintain social distancing while the middle seat remained in use.

Photographs of travellers bunched less that two metres apart, on the flight from London Gatwick to Glasgow, came as CEO Johan Lundgren that he would feel ‘100 per cent safe’ because of measures taken by easyJet to mitigate contamination.

EasyJet grounded its entire fleet in March after the government introduced its coronavirus lockdown laws, while British Airways stopped all of its flights from Gatwick Airport.

What happen when you arrive in the UK?

All passengers arriving in the UK will have to fill in a form before heading to Britain. This will include British nationals coming home, as well as foreign visitors. You must provide the address at which you will be staying in the UK – and self-isolate there. You will not be allowed to leave that address at all, or receive visitors, for 14 days.

How does it work?

Passengers will be able to complete ‘contact locator form’ on the Government’s website up to 48 hours before departure. There will be no paper versions of the form. Failing to complete the form before travelling is a crime, but there will be a short grace period and allow travellers to fill in the form electronically in the arrivals hall.

How will this be enforced?

There will be spot checks to ensure all passengers have completed a form. Border Force staff will interview people as they leave planes and at border checkpoints.

What happens if I refuse to fill in a contact locator form?

You will be given an on-the-spot £100 fine by Border Force officers.

What checks will take place during the 14-day period?

Public health officials will carry out random checks by telephone. If these raise doubts, police will visit the address, issuing a fine where necessary.

What happens if I leave the address I provide in the form?

In England, you will be issued with a £1,000 spot fine. You could even be prosecuted, and face an unlimited fine if convicted. The fine could increase beyond £1,000 if the ‘risk of infection from abroad increases’, the Home Office says. Scotland, Wales and Northern Ireland will have their own enforcement systems.

Will foreign visitors be treated differently?

Yes. They could be removed from the UK ‘as a last resort’ if they fail to comply, the Home Office says. Officials could also refuse entry to non-UK nationals who are resident here. But they cannot refuse entry to British nationals.

Can I use public transport to travel from the airport to my isolation address?

Yes, but the Home Office says it would be preferable if you used your car.

What if I don’t have a suitable address to go to for 14 days?

The Government will provide isolation accommodation – possibly at similar venues to those used by travellers coming back from China earlier this year. The traveller will have to pay for this.

Cancer symptoms: The smelly sign that could signal the deadly disease