PRINCE Andrew was feeling the heat last night after the FBI nicked his friend Ghislaine Maxwell.

Maxwell, 58, appeared in a US court via video link accused of grooming and abusing girls as young as 14 for Jeffrey Epstein.

Andrew, who claimed he cannot sweat in his car-crash TV interview, was earlier asked to co-operate by US lawyers in the probe over paedo pal Epstein.

He has been urged to tell all he knows about alleged Jeffrey Epstein pimp Maxwell.

Maxwell was held at a sprawling estate in Bradford, New Hampshire, at 8.30am ahead of her court appearance. A British woman thought to be Maxwell could be heard sobbing and saying: “I don’t understand” before the hearing.

Prosecutors say she was hiding at her 156-acre property, bought all in cash last December.

They say she had £16million in 15 accounts, and was holding three passports. Maxwell faces up to 35 years in prison if convicted.

She was deemed a flight risk, remanded in custody and will face court in New York.

Andrew’s legal team fear she may strike a deal with prosecutors and lift the lid on the scandal surrounding Andrew and her ex-lover, paedophile Epstein.

Ms Strauss said she’d “like the benefit” of Andrew’s statement — after revealing some of Epstein’s abuse took place in London.

She added: “We’d welcome Prince Andrew coming in to talk with us. Our doors remain open.”

Ms Strauss kept tight-lipped over whether the royal would be quizzed as a suspect or witness.

He has always denied any wrongdoing. Sources close to the Prince were “bewildered” that the US Department of Justice wanted a chat — given they contacted prosecutors twice last month.

They said the Duke’s legal team had “reached out” to lawyers on “a senior level” with no reply.

Four weeks ago law firm Blackfords and PR firm Riverside Advisory issued a statement claiming they had been in contact with prosecutors since January.

They claimed the Duke has offered his assistance as a witness at least three times this year.

Andrew is said to be worried about being caught in a “fishing expedition” by the US authorities’ investigations into Epstein.

He learned of Maxwell’s arrest at the Royal Lodge in Windsor where he has been locked down with ex-wife Sarah Ferguson.

As well as perjury, Maxwell is accused of grooming and enticing girls as young as 14 into “sexualised massage” sessions.

It is claimed she played a key role in helping Epstein “identify and befriend” victims.

In some cases she joined in herself before “slithering” back to her privileged life, it is claimed.

An 18-page indictment described how Maxwell “helped put victims at ease because an adult woman was present”. The sessions are alleged to have taken place at posh properties including her own London pad.

Andrew has been her friend for decades, and she is alleged to have introduced him to Epstein victim Virginia Roberts Giuffre in 2001.

A now infamous picture was taken in Maxwell’s London home showing Andrew with his arm around Ms Roberts, then 17. She said they later had sex — which the Prince vehemently denies.

Andrew has suggested experts could have doctored the photo in which Maxwell — daughter of disgraced media tycoon Robert — is seen smiling in the background.

Ms Strauss said the case against Maxwell was a “prequel” to actions Epstein was accused of before his death in a New York jail last August.

The attorney added: “Maxwell lied because the truth as alleged was almost unspeakable. Maxwell enticed minor girls, got them to trust her then delivered them into the trap she and Epstein had set.

“She pretended to be a woman they could trust. All the while she was setting them up to be sexually abused by Epstein, and in some cases by herself.

“After many years Ghislaine Maxwell finally stands charged for her role in these crimes.”

William Sweeney, of the FBI’s New York field office, said: “Today we announce the arrest of one of the villains in this investigation.

“We have been discreetly keeping tabs on Maxwell’s whereabouts and more recently learned she had slithered away to a gorgeous property in New Hampshire, continuing to live a life of privilege while her victims lived with the trauma inflicted on them years ago.

“We moved when ready and Miss Maxwell was arrested without incident. Like Epstein, she chose to blatantly disregard the laws and her responsibility as an adult.”

He paid tribute to the courage of victims who “persevered against the rich and connected and did so without a badge and a subpoena”.

During her court hearing, Maxwell told District Judge Alison J. Nathan she understood she had waived her right to an in- person hearing after consenting to the video conference, which lasted around 20 minutes.

Judge Nathan told Maxwell she would be temporarily detained and “transported to the charging district” — the United States District Court for the Southern District of New York.

On July 8, 2019, Epstein was charged with the sex trafficking of minors in the same court. Epstein’s victims hailed arrest.

‘MADAM’ OF THE MANOR

David Boies, who represents Ms Roberts Giuffre, now 36, said: “This is a great day for justice. Jeffrey Epstein did not and could not have acted alone.”

Jennifer Araoz claims Epstein raped her when she was 15 after one of his recruiters lured her to a £65million mansion.

She said: “For years, I feared Epstein and his sex trafficking ring. Maxwell was the centre of that ring. Her arrest is a step in that direction. It truly means the justice system didn’t forget about us.” 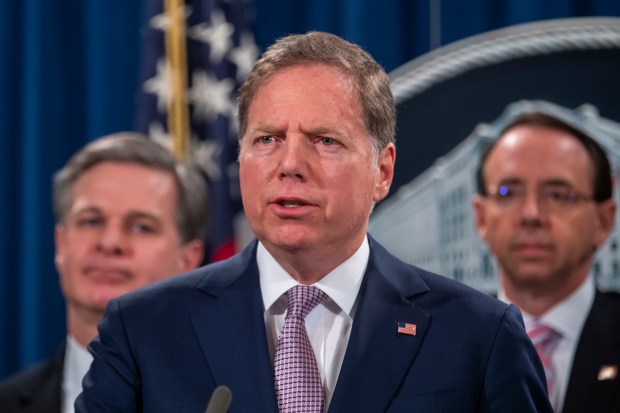 Geoffrey Berman, below, accused the royal of repeatedly refusing requests to help his probe into paedophile Jeffrey Epstein’s co-conspirators.

Attorney General William Barr removed him last month — with some claiming it was on ­Donald Trump’s orders.

Spencer Kuvin, lawyer for Epstein’s victims, suggested to The Sun that the president or his staff may have told Mr Berman to stop investigating Andrew.

He then said he was fired when he refused.

Rep. Louie Gohmert tests positive for COVID-19 ahead of trip with Trump

Cleaning: Mrs Hinch’s mopping hack for bathroom tiles to get them sparkling clean

What stops spiders coming into your house?

Poundland is selling light-up glass pumpkins and people are snapping them...

Tottenham awarded a bye to face Chelsea in Carabao Cup after...