DEVASTATING new data has revealed that one person is dying from coronavirus every eighty seconds in the United States as deaths have spiked by 36 percent.

Within the past week, one person died every 80 seconds from COVID-19, according to an NBC News tally released Wednesday. 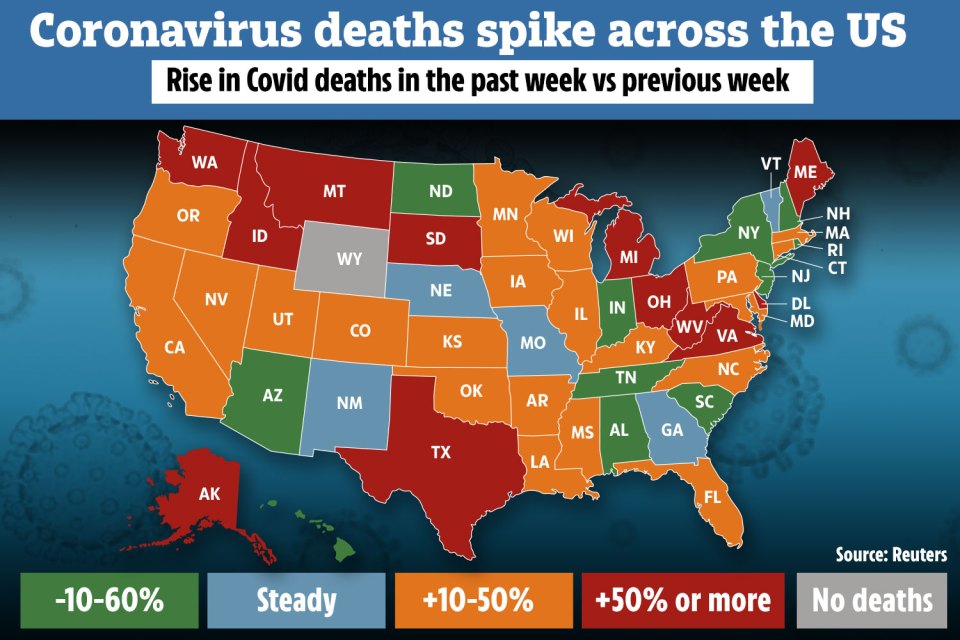 A casket is rolled outside a funeral home in Brooklyn on April 30, 2020[/caption]

The findings suggest that the rate at which people are dying has been speeding up.

The shocking details come as the latest data from Johns Hopkins University has revealed that the death toll in the US has surpassed 157,000.

As of Wednesday, the number of confirmed coronavirus cases across the US reached 4,804,822.

According to a Reuters study, US coronavirus deaths have continued to rise within the past month.

In just seven days – the week ending on Sunday, August 2 – more than 8,500 people passed away from the virus, the findings state.

The number of coronavirus deaths have continued to rise[/caption]

According to a Reuters study, US coronavirus deaths have continued to rise within the past month[/caption]

The shocking death toll was found to be 36 percent higher than the week prior.

As per Reuters, California, Florida, and Texas made up nearly 180,000 of last week’s 435,000 new coronavirus cases – however, those states still saw a decrease in cases since the previous week.

In total, 22 states saw an increase in cases throughout the past four weeks.

In Oklahoma, cases have been increasing every week for the past nine weeks.

Cases in Montana increased for the eighth week in a row and Missouri for the seventh week.

The biggest rise in deaths was seen in West Virginia, South Dakota, and Virginia.

NBC News data showed that 1.8million of the total 4.8million confirmed coronavirus cases across the US arose after July 7.

As the number of deaths across the country continues to rise, New York City is creating “checkpoints” to enforce mandatory quarantines for any visitors that are arriving from coronavirus hotspot states.

A child is seen wearing a mask in a car in Dallas, Texas on August 4[/caption]

The checkpoints will be located at bridges and tunnels entering into the city.

“The checkpoints are going to send a very powerful message that this quarantine is serious,” De Blasio said.

Meanwhile, one in four Americans has missed a payment on at least one of their bills since the coronavirus pandemic began, new research says.

A survey of 2,000 respondents examined how the pandemic has impacted Americans‘ financial health and found many are struggling to pay their bills.

Arsenal goalie Emiliano Martinez threatens to quit if he is forced to play second...