MALTA and the Netherlands are now on the UK quarantine list after coronavirus cases have climbed in recent weeks.

But Gibraltar was given a reprieve with the Rock clinging on the list of safe territories.

The Netherlands has seen an increase in new coronavirus cases[/caption]

While Malta’s overall cases are low, the spike has caused concern with the UK government[/caption]

From August 15, Brits will now need to quarantine when arriving back from the France, Malta and the Netherlands.

All Brits will now face a two-week quarantine when returning to the UK, giving holidaymakers less than a day to get back if they want to avoid going into quarantine.

The UK government made the announcement after new cases rose above 20 per 100,000 population in the last few weeks.

About 400,000 expected to be affected in France alone.

Brits stuck in France with no hope of getting back before the rule changes will be able to claim Universal Credit if they are not paid for their quarantine period.

Employers cannot claim back statutory sick pay, and have no obligation to pay wages to those in quarantine, although many do.

However there are calls from backbench Tory MPs for the Government to pay the wages of tourists if caught out by rule changes while already away.

The Foreign Office travel advice for France will also change when the quarantine measures come in.

It will advise against all “non-essential” travel to our neighbour — but will mean that those due to head there on holiday will be able to claim their cash back.

Boris Johnson said he had to be “absolutely ruthless” over imposing the travel rules, “even with our closest and dearest friends and partners”.

The PM added: “I think everybody understands that. We can’t be remotely complacent about our own situation.

“Everybody understands that in a pandemic you don’t allow our population to be re-infected or the disease to come back in.

“That is why the quarantine measures are very important and we have to apply them in a very strict way.” 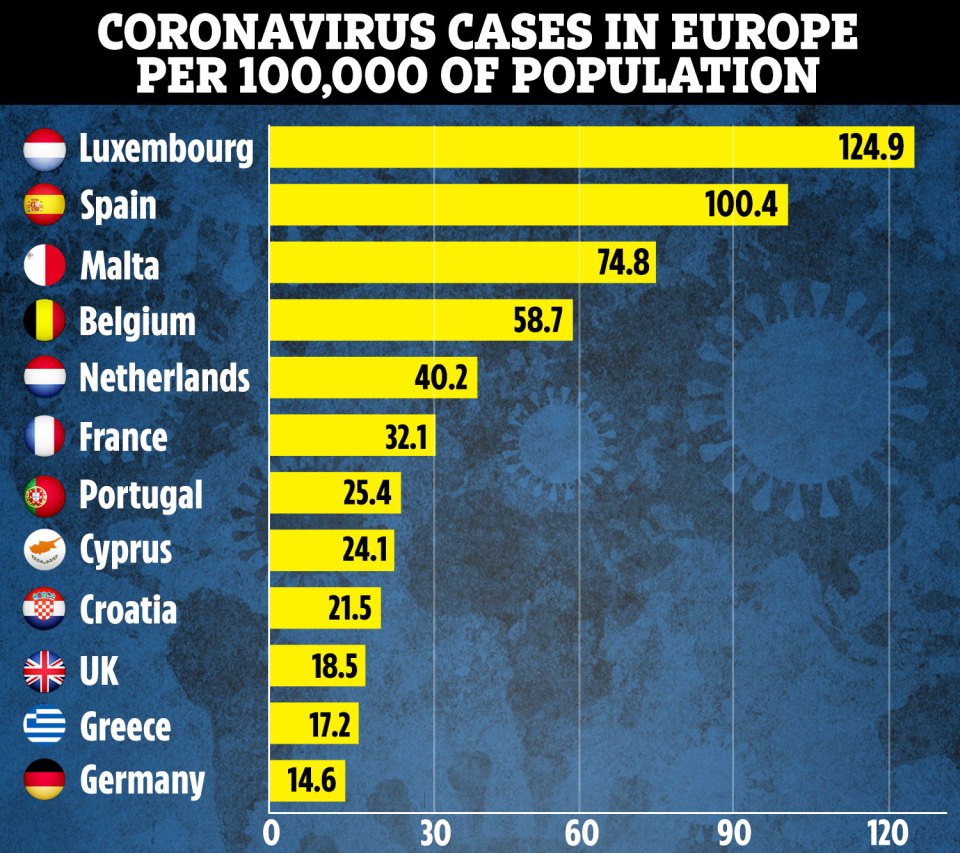 Which countries in Europe are now on the travel ban list?

Last month Brits returning from Spain were ordered to isolate for 14 days.

It is unclear whether airlines and tour operators will cancel any holidays or flights.

Using data from the European Centre for Disease Prevention and Control (ECDC), countries which go above 20 are watched by the government and if they don’t improve, are deemed unsafe for travel.

Coronavirus cases in France are some of the highest in Europe, with 206,696 cases overall.

Malta, while having just 1,245 cases, saw 94 new cases on August 3, the highest daily count since the beginning of the pandemic.

The curve of new cases in The Netherlands has increased as well, with 61,204 cases in total. 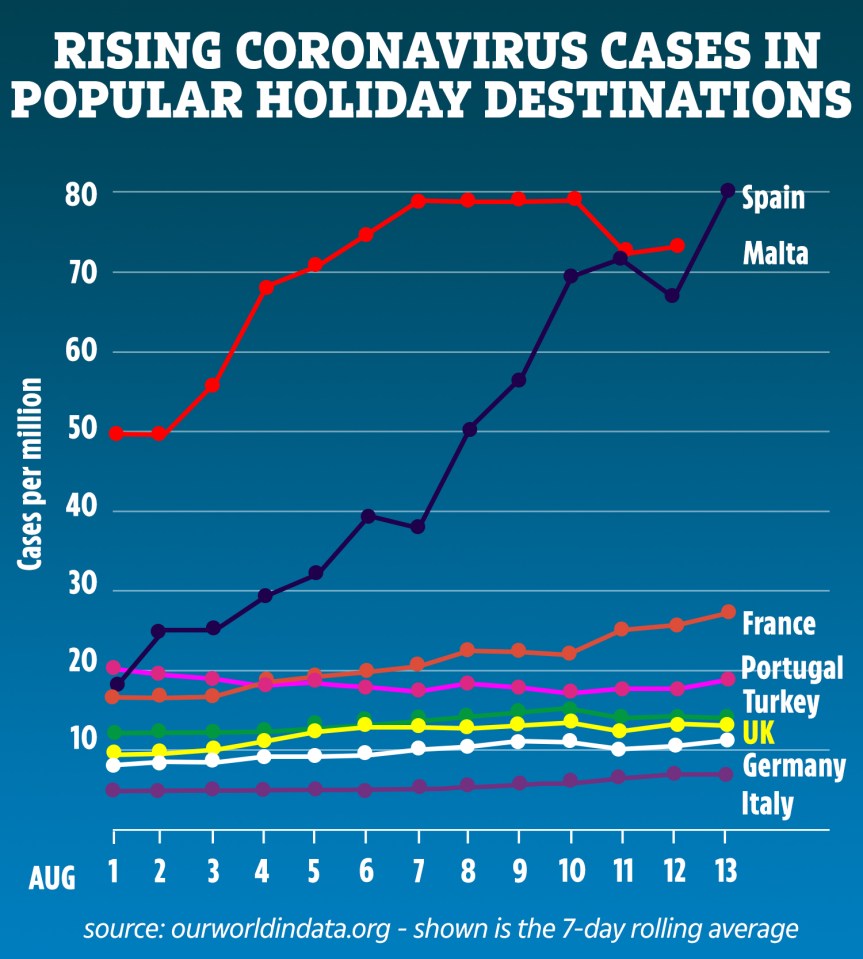 Cases have continued to rise, prompting fears of a UK travel ban.[/caption]

Malta had almost no new daily cases across July[/caption]

France is now on the UK quarantine list[/caption]

There are currently no travel restrictions reciprocated by the three countries, although this may change following the UK government’s announcement.

It follows news that Spain, Belgium and Luxembourg were all removed from the safe list in recent weeks.

The Prime Minister previously refused to advise on certain countries being taken off the safe travel list: “I don’t want to advise people about their individual holidays, individual decisions, they should look at the travel advice from the Foreign Office clearly.

“But what I will say, and I hope people would expect us to do this, in the context of a global pandemic, we’ve got to keep looking at the data in all the countries to which British people want to travel.

“Where it is necessary to impose restrictions or to impose a quarantine system, we will not hesitate to do so.”

Most read in News Travel


Brits banned from Greece flights because of confusing coronavirus forms

Restrictions in France have already been increased in recent days, with face masks enforced in public streets in Paris and Toulouse.

Passengers were banned from boarding their flights to France as they only have reusable masks, with the French government only allowing disposable surgical masks.

Coronavirus UK news 12pm – ‘No evidence’ Rule of Six will work as Brits...

Amid Facebook boycott over hate speech, ads for 530 brands set to disappear from...