At least 130,000 more people have died during the coronavirus pandemic globally than is being officially reported, an investigation has found.

A review of ‘excess death’ figures in 27 countries suggested the true toll is closer to 600,000 — significantly higher than the 450,000 fatalities declared by governments around the world.

Some of these deaths — the total number of fatalities above the five-year average — will be down to undiagnosed Covid-19, experts say.

Others will be the indirect result of the pandemic, including people whose medical treatment was delayed, or who couldn’t get to hospital when they were seriously ill.

Excess deaths are considered to be an accurate measure of the number of people killed by the outbreak because they include a broader spectrum of victims. 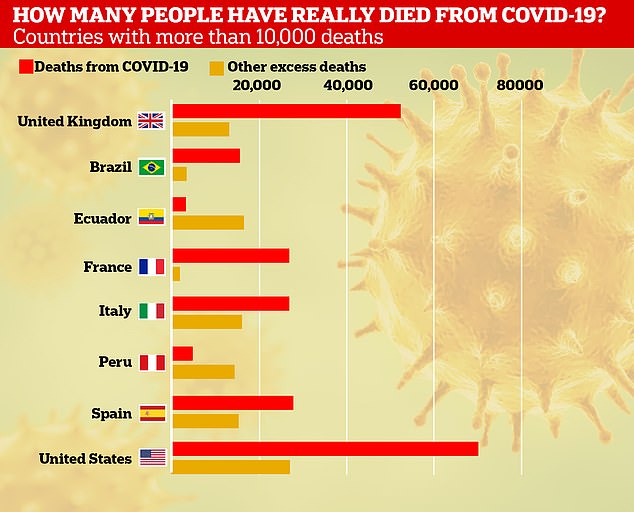 Pictured: Countries with over 10,000 more deaths than the five-year average. The US and UK have recorded the highest number of Covid deaths, but Ecuador has the highest excess fatalities as a percentage 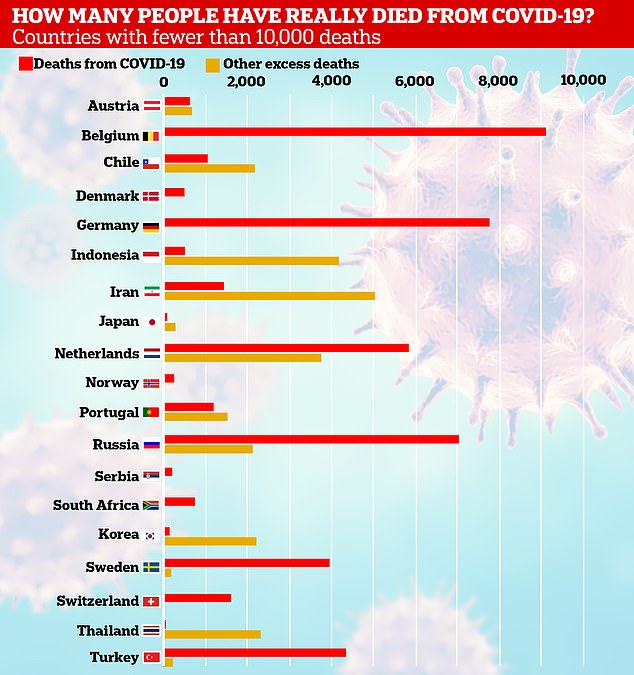 Pictured: Countries with fewer than 10,000 additional deaths compared to the five-year average

The BBC investigation looked at preliminary mortality data in the 27 countries where figures were available.

But the reliability of the data depends on how much testing nations are doing and whether they include Covid-19 deaths outside of hospitals, and in care homes.

The worst-hit European countries have contributed hugely to the excess death toll around the world. 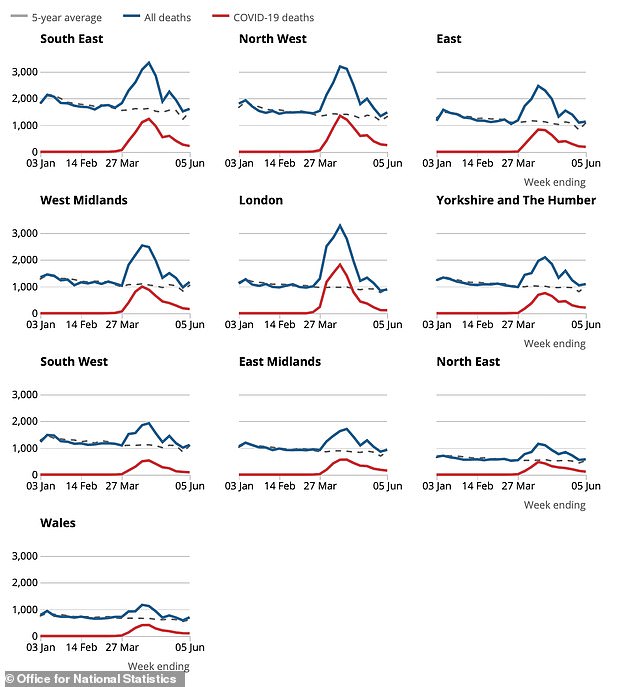 NO COVID DEATHS AT ONE IN THREE NHS TRUSTS FOR A WEEK, AS UK’S OUTBREAK FADES

One in three hospital trusts have went a week without a Covid-19 death, according to Oxford University analysis.

Professor Carl Heneghan and Dr Jason Oke, from the prestigious university, found there had been no fatalities at 49 trusts (37 per cent) in the past seven days.

In the last two days, half of trusts had reported no deaths.

Professor Heneghan, a professor of evidence-based medicine, said it was ‘plausible’ that there excess deaths could return to baseline by the end of this month.

Figures from the Office for National Statistics published yesterday showed London had become the first area in England to see deaths from any cause drop below the five-year average in the first week of June.

Professor Heneghan told The Times: ‘In the last week (June 10-16) there were 442 Covid deaths reported in hospitals in England, down from 752 the week before: 310 fewer.

‘Therefore, we should have no excess deaths by the end of the month and it is possible we don’t have any by this week if the counts above are replicated in other settings.’

Dr Oke, a senior statistician, highlighted the North East and the South West, as the ‘most likely candidates’ to see death levels return to the normal.

The North East reported only 39 excess deaths in the latest week of figures, while the South West recorded 50.

Together, this means the total number of excess deaths in the UK across this period now stands at 64,402 – 43 per cent higher than the five-year average in the UK.

There has been a similar trend in Italy and Spain, which were formerly at the heart of Europe’s epidemic.

Of these, 26,644 were officially declared by the Government as being Covid-related and 16,278 are not accounted for.

By comparison, Germany – which got a grip on widespread testing early in the crisis – has only suffered 4 per cent more deaths than normal, or around 7,100.

The review found Ecuador had the highest excess death tally as a percentage, the majority of which were unaccounted for.

Deaths in the South American country are 108 per cent higher than normal, with about 19,500 more people dying than usual between March 1 and May 31.

But the number of excess deaths for these three months is five times higher than the Government’s official Covid-19 total, largely caused by a lack of testing. Just 3,358 of the excess deaths were diagnosed with the virus.

In the US, there had been almost 100,000 more deaths than normal from February 16 to May 2 – the most in any nation in the world. But this is only 16 per cent higher than the yearly average.

This is largely due to the fact some states were hit hard with outbreaks, while many got through the crisis relatively unscathed.

By comparison, South Dakota, West Virginia and Idaho have declared fewer than 100 Covid deaths each.

Reacting to the findings, Professor Paul Hunter, an epidemiologist from the University of East Anglia, told MailOnline that the high number of excess deaths signalled it was time to get healthcare ‘up and running as soon as possible, providing it can be offered safely without putting patients’ lives at risk.’

He added: ‘I have seen it stated that up to 20 per cent of Covid-19 infections were acquired in hospital. I do not know the validity of this exact number but certainly there are many people who would be alive today if they had not needed to go to hospital and then caught Covid-19. After all mostly it is only potentially vulnerable people, older people and those with pre-existing disease, that need to go to hospital.’

Professor Hunter said calculating excess deaths was the most reliable way to compare countries’ death rates during the pandemic. But it is not without its flaws, he said.

WHAT ARE EXCESS DEATHS?

Excess deaths are those which occur in addition to any that would be expected to happen in the same period in an average year.

They are measured in the UK over a five-year average.

For example, if the average number of deaths in the first week of April over the least five years was 10,000, the 10,001st person to die in that week is considered an excess death, along with any others who come after them.

Ministers have admitted ‘excess deaths’ are the most reliable measure of how many fatalities the coronavirus has actually contributed to.

They take into account not just infected people who have died of Covid-19 but also those who died because of indirect effects of the outbreak.

The biggest contributions to this is expected to be people whose Covid-19 was undiagnosed, as well as medical treatment that was interrupted or stopped because of the pandemic, including people who avoided going to hospital.

‘In theory excess deaths should give a better understanding of the total mortality associated with the epidemic. But there are a number of issues,’ he said.

‘There will be a proportion of those deaths that may be due to other diseases that could have been prevented it health care services were still easily accessible. But is not that easy to put a number on this proportion.

‘If you look at the UK most of the excess deaths that were not diagnosed as COVID19 were early in the epidemic.

‘In the past three weeks there have been more COVID19 than excess deaths which suggests to me that most of the non COVID-19 deaths were actually COVID-19 but at a time when we did not have as effective diagnostic tests readily available.’

The number of excess deaths will likely continue to rise in the coming weeks and months as healthcare systems operate at limited capacity.

New infection control measures and social distancing will make it difficult for hospitals to go back to normal until a vaccine is developed.

It comes after London became the first region in England to see deaths fall below average this week for the first time since March, as the outbreak continues to fade.

A weekly report from the Office for National Statistics (ONS) shows that the number of people who died of any cause in London was three per cent lower than average between May 30 and June 5.

This includes people who died with the coronavirus as well as anyone else who died from other causes in that time. London’s five-year average number of deaths for that week was 917 but dropped 2.8 per cent to 891 in 2020.

Meanwhile, deaths remain proportionally higher than average in every other region of England, and Wales, with Wales still seeing 15 per cent more deaths than usual.

Other promising data shows the virus’s death toll in England and Wales hit a 10-week low in the seven-day spell ending June 5, marking another significant fall.

The falling numbers of deaths and plateau in new cases means that the UK can continue to push out of lockdown, with ‘non-essential’ high street shops reopening to the public for the first time yesterday. 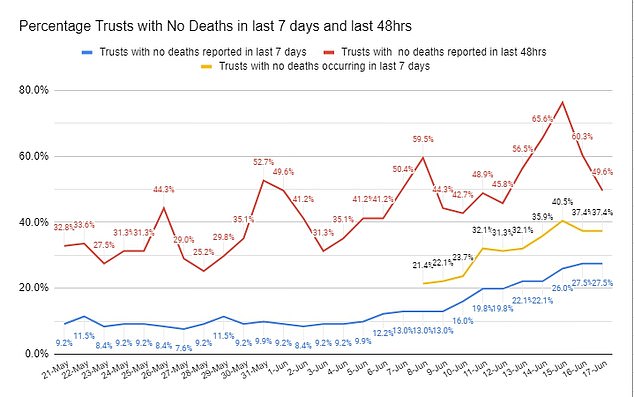 One in three hospital trusts have went a week without a Covid-19 death, according to data analysed by Oxford University experts 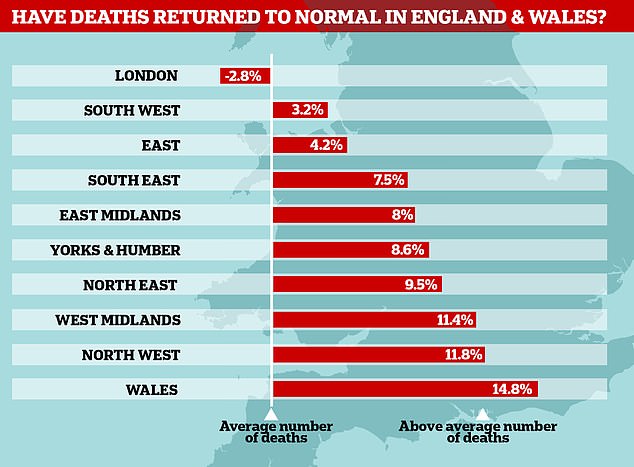 The week from May 30 to June 5 marked another significant fall in the number of people dying with the coronavirus in England and Wales as the weekly total hit a 10-week low and the lowest since the end of March.

England and Wales will not have returned to pre-lockdown levels of mortality until fewer than 539 people die in a week – that was the number recorded in the week ending March 27, when schools and workplaces closed.

As the weekly death toll continues to tumble – and some experts are hopeful it could hit zero by the beginning of July – Britain’s total number of victims is still rising. It is third worst in the world behind only the US and Brazil.

‘Brit’ woman, 21, ‘raped in park at 4am after being stalked by predator in Costa Brava resort’