BEING a reality TV star pays off – but it pays off for some A LOT more than others.

And that’s especially true for the winners of I’m A Celebrity… Get Me Out of Here!, where potential social media earnings range from tens of thousands for some to a tenner for others.

Queen of the Jungle Vicky Pattison can make over 1,000 times more per Instagram post than some of the other I’m a Celeb winners[/caption] 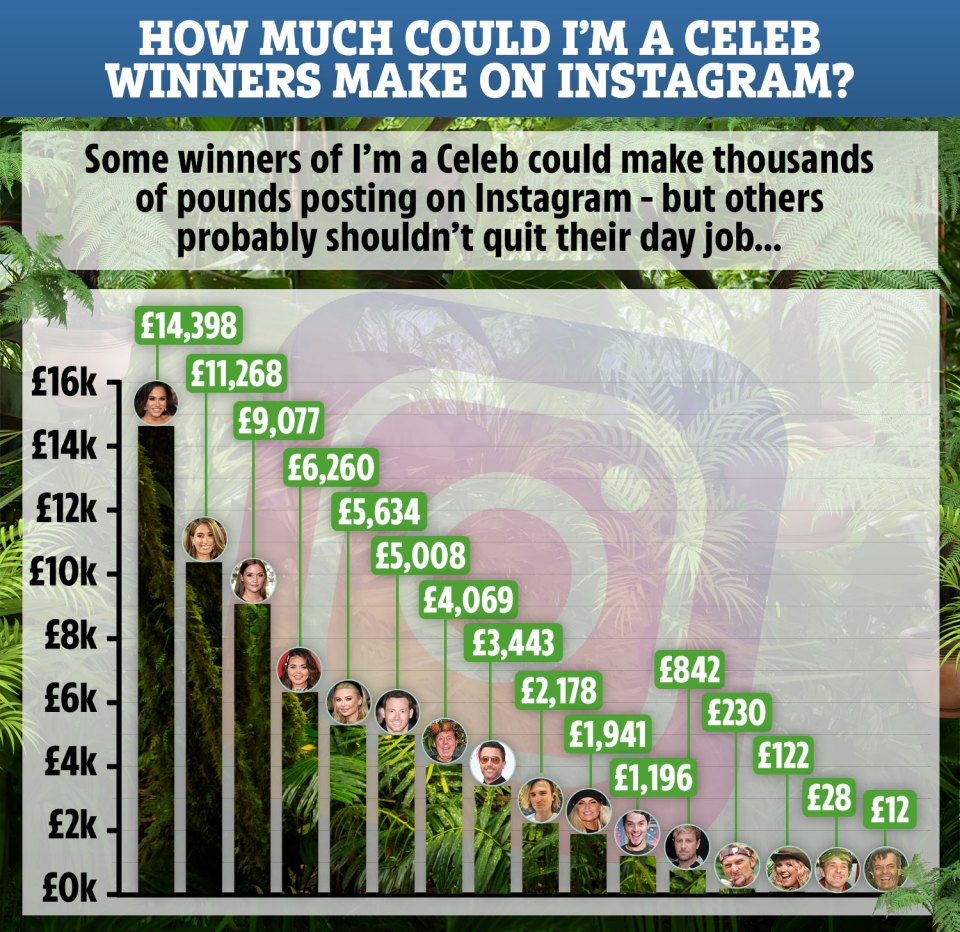 Vicky Pattinson, who won the 2015 series, could charge a whopping £14,400 per post thanks to her 4.6million-strong army of followers, whereas series one winner Tony Blackburn could only make £12 flogging brands to his more modest Instagram audience of 3,800, according to new research from OnBuy TV.

With I’m A Celeb moving to a Welsh castle due to the coronavirus pandemic, we investigate how popular each King and Queen of the Jungle really is on social media, their net worth and how much money they could earn per post.

Vicky Pattison became Queen of the Jungle in 2015[/caption]

Topping the I’m A Celeb rich list is Vicky Pattison, who won the show in 2015.

The 33-year-old first shot to fame after appearing in MTV’s Geordie Shore, from which she reportedly pulled in £500,000 over three years.

Since then, Vicky has taken part in a string of successful shows such as Ex on the Beach, Celebrity MasterChef and E4’s Celebrity Coach Trip, as well as guest appearances on Celebrity Juice, This Morning and a panellist spot on ITV’s Loose Women.

A large chunk of the brunette’s fortune also comes from her three books, a fitness DVD and a fashion line with Ann Summers.

The reality TV star currently lives with her TOWIE boyfriend Ercan Ramadan in a lavish house in Essex, with the pair’s sofa apparently so expensive that she refuses to have sex on it.

Stacey, who became Queen of the Jungle in 2011, is currently dating fellow I’m A Celeb winner Joe Swash[/caption]

TV personality and singer Stacey Solomon was crowned Queen of the Jungle in 2011.

Former X Factor star Stacey, now 30, finished in third place in the singing competition in 2009 and later released her debut album and toured the UK.

Much of Stacey’s money comes from her TV career – she has taken part in everything from ITV2’s Love Island After Sun and Top Dog Model and was a regular feature on Loose Women.

The blonde bombshell also co-hosted the I’m A Celeb spin off, Extra Camp, and the fourteenth series of The X Factor in 2017.

The 27-year-old English actress first appeared on our screens in 2010 as Lauren Branning in BBC’s EastEnders, where she reportedly raked in a six-figure salary.

Jacqueline also has her own fashion line with In The Style and was recently rumoured to replace Michelle Keegan on Our Girl, before talks fell through.

Since then, the TV personality from County Durham has joined a string of shows such as Ant & Dec’s Saturday Night Takeaway and Channel 4’s documentary The British Tribe Next Door, where she lived with her family in a remote village in Namibia.

Scarlett recently showed off her singing skills to fans on social media, before revealing that she will be going on Celebrity Karaoke Club.

The 25-year-old blonde babe first drew attention when she joined the cast of Made in Chelsea in 2014, strutting her stuff with the rich kids in London.

After winning the 17th series of I’m A Celeb, Toff took part in Hunted – Stand Up To Cancer alongside Prime Minister Boris Johnson’s dad, Stanley Johnson.

The jet-setter can often be seen on holiday at idyllic locations, such as her recent luxurious trip to the Maldives.

Joe recently made headlines when his girlfriend Stacey Solomon told the world it’s ‘too hot to have sex’ during the heatwave.

The 38-year-old actor first shot to fame in his role as Mickey Miller on BBC’s EastEnders, but also works as a presenter for ITV2.

He is the highest paid King of the Jungle on Instagram, having won I’m A Celeb in 2008 and earlier this year also won Dancing On Ice.

The crown was placed on Harry’s head last year, as he became the nation’s favourite person in the jungle[/caption]

Sports legend Harry Redknapp, 73, made his fortune on the field.

The English football manager and former player has worked with some of the top names in football, including Tottenham Hotspur, West Ham and AFC Bournemouth.

He also celebrated a FA Cup win in 2008, when he was the manager for Portsmouth.

Harry, who is married and has two grown children, often shares snaps of his family on social media and of course, the passion for his favourite sport.

Gennaro ‘Gino’ D’Acampo became a household name in British kitchens after he secured a regular gig on This Morning.

The Italian celebrity chef owns several restaurants in the UK under the brand My Restaurant and has also published multiple cookbooks.

Gino, 44, shares recipes and cooking tips on social media but is also a family man, often uploading snaps of his three children.

McFly’s Dougie Poynter has his finger in many pies.

The 32-year-old bassist amassed most of his fortune from playing in the band, which is back recording music after a hiatus.

But Dougie also works as a model, actor and has his own fashion line, too.

Compared to fellow I’m A Celeb winners, he has a much smaller Instagram following but money doesn’t seem to be an object for the artist, who has his own luxury pad in London, complete with a music studio.

While Kerry Katona is one of the most well-known celebrities in the UK, she makes substantially less through her Instagram account than other jungle queens.

The former Atomic Kitten went into reality TV after leaving the girl group and was the star of three MTV shows that revolved around her life.

After a slump in her career, following drama in her personal life including two divorces, the 39-year-old returned to the screen on Dancing on Ice and also stepped into the Celebrity Big Brother house.

Kerry is no stranger to branded posts on Instagram – her most recent snap is for a competition for fans to win £6,000 worth of Louis Vuitton products and a £2,000 cash prize.

Matt Willis started his lucrative career in the music industry as the bassist for Busted and has since released a solo album.

During his time in the jungle in 2006, the artist famously lost two stone while surviving on delights such as kangaroo anus, crocodile eyes and mealworms.

The 37-year-old then went on to co-host a show with his wife and popular TV presenter Emma Willis, and had a brief stint on EastEnders, as well as appeared in ITV’s Birds of a Feather.

He is one fifth of one of the most famous boy bands of all time and last year it was reported that he is the richest of them all.

Westlife, which was originally formed in 1998, has released a dozen albums, done even more world tours and taken home numerous awards, so this King of the Jungle has plenty of money stashed away in his bank account.

In addition to his music career, the 40-year-old Irish singer has also been a coach on The Voice of Ireland.

As one of the most prominent British Superbike racers in the world, 55-year-old Foggy is a multi-millionaire.

Not only is he a record-breaker in the racing world, but Carl was also given an MBE for his achievements in 1998, before becoming King of the Jungle in 2014.

An EastEnders regular, the award-winning actress has spent most of her career on the soap, before officially departing the fictional borough of Walford in 2014.

Charlie Brooks has enjoyed appearances on The Bill, Wired and Bleak House, and also won the Strictly Come Dancing Christmas Special in 2011.

The 39-year-old mum-of-one runs her own drama school and isn’t very active on social media, mostly sharing tidbits about her career, family or activism.

If you’re not a sports fan, you might not be overly familiar with Phil Tufnell’s work.

The 54-year-old former cricketer played for Middlesex Country Cricket Club from 1986 to 2002, and has also represented England at 20 One Day Internationals.

Phil’s not big on Instagram but then again, he’s already sitting pretty at £10million.

Tony Blackburn won the first-ever I’m A Celeb, way back in 2002.

MOST READ IN TV


BBC confirms EastEnders will return to screens on September 7


Tim's exit in Corrie revealed as he discovers Geoff's nasty side

Now 77, the English DJ has spent most of his career working in radio for BBC, as well as Capital London and Gold Radio.

Far from being a social media influencer, Tony makes the least of his fellow jungle winners on Instagram.

Victoria Beckham shares sweet snap of Harper, nine, posing for a selfie with her...

Rick and Morty tackle coronavirus in all-new clip ahead of season...