A HEN did a real-life “Chicken Run” escape when she got trapped under an egg lorry trailer and travelled 90 miles without ruffling a feather.

The stowaway bird was discovered only when she arrived at a food delivery firm. 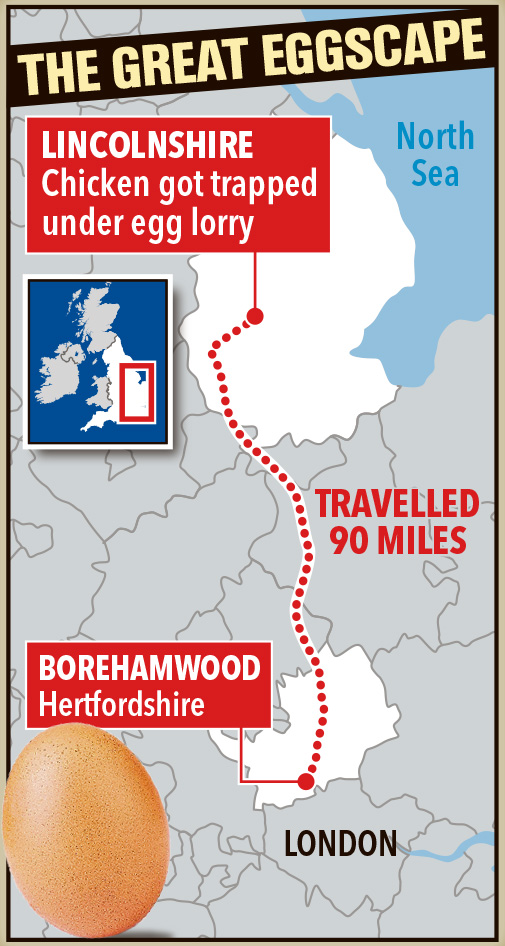 Staff caught her and put her in a box — where she promptly laid an egg.

The RSPCA took her under their wing after the two-hour trip from Lincolnshire to Borehamwood, Herts.

Inspector Nicole Smith said: “The journey would have been a feat of hendurance but thankfully, the brave bird was completely unscathed.

“She was a little bedraggled from the wet and windy two-hour trip but certainly wasn’t in a flap when she was found.

“The staff put her in a cardboard box where she made herself so comfortable that she laid an egg!

“The delivery company was unable to trace where the bird had come from so she was signed over to the RSPCA.”

The hen now has a new home with local woman Hilary Carlen, who has adopted farm birds from the RSPCA before.

She has given her the name Henrietta.

Hilary said: “I don’t think most hens would have survived that stress.”