AFTER a long, hard season footballers love to unwind – just like the rest of us.

With their mega salaries they are able to jet off to some of the most glamorous locations in the world. 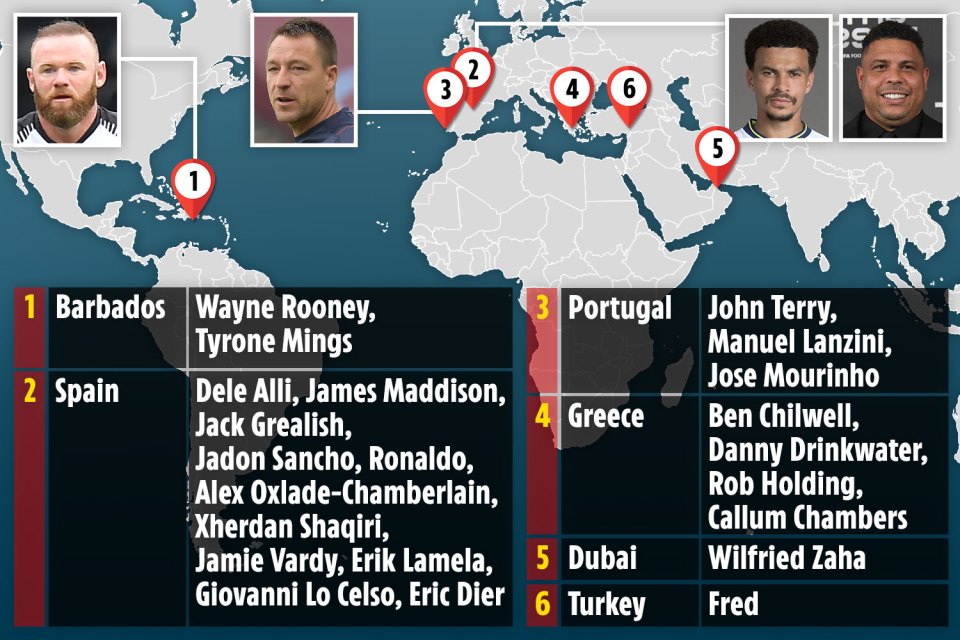 The likes of Wayne Rooney, Dele Alli, Cristiano Ronaldo and more have shared snaps on social media soaking up the sun in these dream destinations.

But where did they all go?

While some holidaymakers are shunning Spain after a spike in coronavirus cases, Dele Alli, Jack Grealish, Jadon Sancho and James Maddison are lapping up the attention in Ibiza.

Spurs star Alli and Aston Villa hero Grealish were seen enjoying a couple of cold drinks with their female companions.

While Alli and Maddison were spied hanging out at O Beach Club a previous evening.

Separately, Sancho was seen enjoying time on a yacht with a mystery brunette.

The Manchester United target also wasn’t slacking on his fitness, running shirtless and pumping some iron during his trip.

The Juventus forward might still be smarting from missing out on winning the Serie A Golden Boot, but at least he’s having a lovely holiday.

Ronaldo is topping up his tan in beautiful Portofino, Italy, with his family and gorgeous missus Georgina Rodriguez.

They’ve taken their new super-yacht for a spin in the Mediterranean Sea.

And they also enjoyed a lavish dinner with friends at the expensive Langosteria Paraggi restaurant.

Missing out on that Golden Boot doesn’t seem so bad now.

Wayne Rooney has whisked off wife Coleen after her ‘Wagatha Christie’ worries to Barbados.

The pair are staying in a luxury £25,000-per-week five-bedroom mansion complete with an infinity pool.

And they’ve found time to enjoy a romantic boat ride too.

Aston Villa star Tyrone Mings has been toasting saving his side from Premier League relegation enjoying some time in Barbados.

The towering defender, another Manchester United target, even showed his love for watersports – hopping on a jet ski.

The Brazilian legend has been soaking up the sun with his girlfriend Celina Locks on a yacht in Spain.

They are enjoying the delights of Formentera, the smallest of the Balearic islands.

And Ronaldo, who hung up his boots in 2011 after suffering with hypothyroidism, looked healthier than ever in his swimming shorts thanks to a new fitness regime.

He even took time to make a splash in the sea.

With his favourite holiday destination Dubai probably being too hot right now, JT and his missus Toni jetted off to Portugal.

And they did it in some style, evading the travel ban by taking a private jet to the Algarve with a glass of champagne in hand.

They romantically drank wine and enjoyed the sunset at Maria’s Restaurant & Beach.

Terry will be dining out on helping Aston Villa maintain their Premier League status, no doubt.

The Terrys took a private jet to Portugal[/caption]

They have rented a stunning villa in the Algarve[/caption]

The in-demand Crystal Palace forward will be checking his phone constantly on his holiday.

Linked to Arsenal and Manchester United, his agent might have some trouble getting through to him in Dubai.

Zaha is braving the sweltering heat of the Middle East, where it can reach 45C this time of year, and rented a boat with girlfriend Paige Bannister.

They were pictured on a yacht in front of the Burj Al Arab hotel.

Chelsea midfielder Danny Drinkwater has been lapping up the hot weather in Mykonos, Greece.

The Foxes left-back has been linked with a summer move to the Blues, and hanging out with a Blues star just adds fuel to the fire.

So, he treated himself to a trip to the Amalfi Coast, Italy, where he seems to be living his best life.

Danny Ings shows off his tan on the Amalfi Coast[/caption]

Another footballer who has taken a short flight to Portugal is West Ham’s Argie star.

Lanzini is enjoying Faro in the Algarve, Portugal, with his beautiful missus Jennifer Reina.

The pair relaxed on a boat, before the midfielder proposed to the make-up artist and photographer on a cliff overlooking the sea.

They’ve also enjoyed some time in Positano, like Cristiano Ronaldo and family.

And they aren’t the only couple to have got engaged this summer.

The loved-up pair got engaged in Faro, Portugal[/caption]

Ake, 25, got down on one knee in the Nice in the South of France – sharing the romantic snaps on social media.

Nathan Ake proposed to Kaylee Ramman on their holiday[/caption]

Kaylee has been lapping up the sun in Nice, France with Ake[/caption]

Vardy and his missus Rebekah, the other half of the Wagatha Christie chronicles, are also enjoying some sun away.

They’re in Ibiza, well they’ve been seen cuddling in the sea and putting their troubles behind them.

The Vardy family later enjoyed a trip on a speed boat, as they explored the island.

The Arsenal defensive pair will be celebrating the club’s recent FA Cup success.

And they’ve picked the best place to do it, on the Greek island of Mykonos.

They’ve hung out together, while Chambers has been stepping up his recovery from injury.

The former Southampton man was seen doing some weight-lifting with a stunning backdrop behind him.

Rob Holding is in Mykonos, Greece[/caption]

Like the Arsenal duo, Spurs pair Lamela and Lo Celso are also on holiday together.

The trio have chosen Ibiza, like Vardy, but will have to adhere to the strict quarantine rules

For 14 days they’ll have to remain in quarantine, when they return.

The 27-year-old took to social media to upload a sweet image of the family, with their son Benjamin at The Land of Legends hotel in Belek.

There they can enjoy sandy beaches, thermal spas and a host of golf courses.

Fred is enjoying his downtime in Turkey[/caption]

The Tottenham manager is back in his homeland.

Mourinho is in the Algarve with his family, including daughter Matilde, who was in Marbella last week without ‘The Special One’.

He has a house in Ferragudo, Lagoa, where they regularly take their holidays.

So far on their trip they’ve been dolphin watching.

Jose Mourinho is dolphin watching in his native Portugal[/caption]

What a season it’s been for the former Arsenal midfielder.

Now a Premier League winner, he and his Little Mix missus Perrie Edwards are in Ibiza.

They were spotted eating out at the lavish Cala Bassa Beach Club with a convoy of pals.

Will the Ox follow in Ake and Lanzini’s footsteps by popping the question? Watch this space.

The Swiss international and Liverpool star is another who swears by Spain.

Winger Shaqiri is also in Formentera with pals, where he’s hired a boat.

And the Premier League-winner might want to invest in some suntan lotion.

Some might say, it matches the shirt he wears.

The Deceived: How did Ophelia actress prepare for role? 'It was difficult to phase out'

Who was Ruth Bader Ginsburg’s husband and when did he die?