People battling debilitating arthritis in the shoulder are finding relief thanks to a revolutionary ‘backward’ ball and socket joint replacement.

Traditional shoulder replacements use a ball-shaped implant at the top of the arm bone, nestling into a cup-shaped socket in the shoulder – just like the normal anatomy.

Many arthritis patients also have damaged shoulder muscles that cannot hold the new joint in place securely. But now surgeons have found a way round this by creating an implant that’s the opposite of a normal shoulder – with a socket-shaped implant attached to the top of the arm bone and a ball screwed into the shoulder.

This requires fewer intact muscles to hold it in place.

At least 21 NHS patients have so far had the implant, which significantly reduces pain in about 90 per cent of cases. 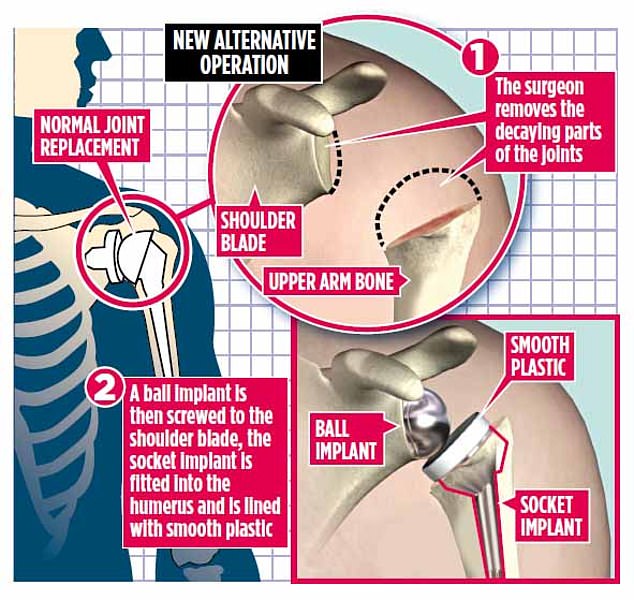 An apparent alcoholic turned out to have a rare condition called auto-brewery syndrome, where yeast in the gut ferments carbohydrates in food into pure alcohol

Doctors were baffled when a man who regularly appeared very drunk – and tests revealed high levels of alcohol in his blood – insisted he never touched booze.

The 46-year-old had the problem for years, and was accused of being a secret drinker, lost jobs and was arrested for drink driving.

It turned out he had a rare condition called auto-brewery syndrome, where yeast in the gut ferments carbohydrates in food into pure alcohol.

The journal BMJ Open Gastroenterology reported that the boozy microbes in his gut were wiped out by antibiotics.

Mr Joby George Malal, a consultant orthopaedic surgeon pioneering the procedure at Bedford Hospital, said: ‘By reversing the configuration of the shoulder joint, we change the way it works – so it relies on different muscles to move.’

Teacher Sue Phillips, from Potton, Bedfordshire, had not slept properly for more than two years because of the pain of an arthritic shoulder.

Following the operation, Sue, 60, not only sleeps through the night, but is back playing hockey. She says: ‘I am no longer in pain and have much more movement than before. It was a great success.’

At the upper end of the humerus is a ball, called the humeral head, which rests against a socket in the shoulder. But this socket is shallow to allow proper movement, as the shoulder has the greatest range of movement of any joint in the body.

This means the job of keeping the ball securely in the socket falls on a group of muscles and tendons called the rotator cuff.

When the shoulder develops osteoarthritis – the gradual breakdown of cartilage that allows smooth movement – this causes friction that leads to severe pain, loss of movement and joint stiffness.

An added problem is the rotator cuff tissue frequently tears with increasing age and usage, something that affects up to half of all adults aged 60 and over.

Surgeons remove the decaying joint through an incision in the front of the shoulder and anchor the socket implant into the top of the humerus – the arm bone.

What’s the difference… between an embolism and an aneurysm

Both embolisms and aneurysms involve a problem with the body’s blood supply – and can be fatal.

An embolism is when something, usually a blood clot, blocks an artery cutting off blood supply. A stroke, when the blockage is in an artery supplying the brain, is one of the most serious types.

An aneurysm is when a blood vessel bulges and can then burst, like a balloon, and may be caused by high blood pressure.

They can develop anywhere but are most common in the largest artery from the heart. These are known as aortic aneurysms.

A long, porous ‘tail’ on the implant feeds into the hollow centre of the humerus so that bone cells grow into it, securing the implant.

The metal ball implant is then anchored to the shoulder blade with screws. The socket it sits in is lined with smooth plastic, which allows for frictionless movement.

Patients are usually back at home later the same day.

‘They keep their arm in a sling for two to three weeks and do gentle exercises that don’t involve moving the shoulder,’ says Mr George Malal. ‘Then we give them a physiotherapy programme and most can do normal things like drive or household chores within six weeks to three months.’

He says some movements are sacrificed – like reaching backwards – but most patients can easily get something off a high shelf.

Sue, who lives with design engineer husband Nigel, 61, says the operation ended a five-year battle with pain and immobility.

She says: ‘I have always played sports, including tennis, and teach physical education, but about five years ago I started getting problems with my right shoulder. I couldn’t lift my arm and it was very painful.

‘I saw my GP and had steroid injections and took ibuprofen, but in the two years before the operation I had not slept properly because of the pain.

‘I had a CT scan and MRI last year and the damage was extensive. The rotator cuff was also damaged, probably as a result of years of playing sports like tennis – I am right handed.’

Sue had surgery in May 2019 and says: ‘My arm was in a sling afterwards – it wasn’t particularly painful, and I just took ibuprofen. Now I can do almost everything and there’s no pain.

‘The only thing I can’t manage is reaching directly up. But I can play hockey again, which is great. Just no more tennis.’