Britain’s coronavirus outbreak is continuing to shrink as two separate batches of data released today suggested only 3,300 to 3,800 people are getting infected each day in England.

Estimates from the King’s College London’s COVID Symptom Tracker app say the number of people being struck down each day has plunged by a quarter in just a week to 3,391 each day. The researchers — who projected the figure was as high as 11,000 just a month ago — have been collecting reports of symptoms and test results from a million UK citizens since the pandemic began.

And government data from the Office for National Statistics has predicted that around 3,800 people are catching the virus each day across the nation — some 26,900 per week. The estimate is based on testing in a representative sample of almost 25,000 people across England, only 10 of whom swabbed positive.

Neither estimate provides projections for Scotland, Wales or Northern Ireland — but both represent a drop from same set of statistics released last week and show the virus is continuing to fade away in Britain, after terrorizing the nation for months.

The two similar estimates are around five times lower than the projection of Public Health England and Cambridge University experts, who a fortnight ago estimated nearly 17,000 cases a day were occurring across the country.

Department of Health statistics today revealed 1,218 more Brits have been diagnosed with coronavirus — but these figures never show the true scale of the outbreak because many people who catch the virus never swab positive because they don’t realise they are sick, couldn’t get a test, or the result was wrong.

The number of people who have been diagnosed in total during the UK’s epidemic is still unknown. Blood testing data published today by the ONS suggested that only 5.4 per cent of England have had the disease — 3.14million people.

However, this figure was lower than the 6.5 per cent it found in its last estimate because it tested different blood samples (total 1,757) which happened to have a smaller proportion of people who had already been infected, the ONS said. 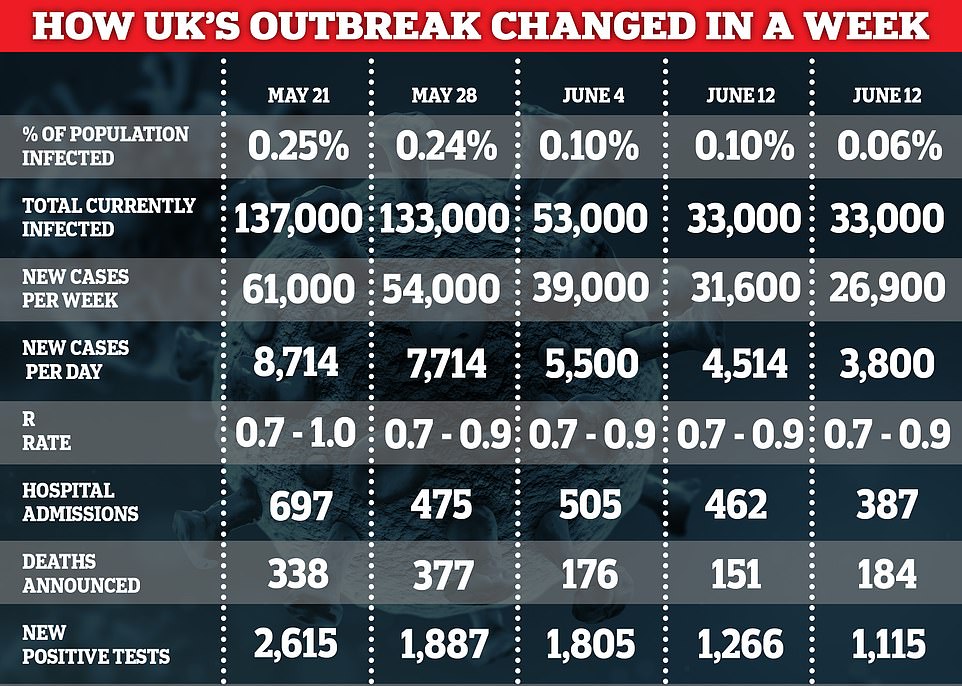 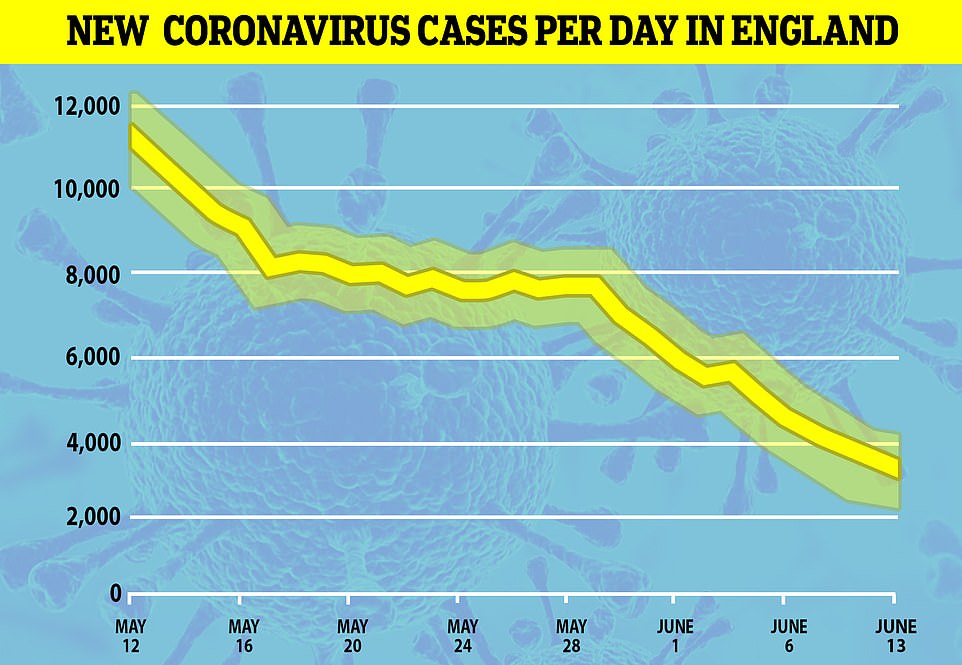 Data from the COVID Symptom Tracker app suggests there are now only around 3,400 new cases of Covid-19 appearing each day in England, down from more than 11,000 per day a month ago

The researchers, working alongside health tech company ZOE, have been collecting reports of symptoms and test results from a million UK citizens 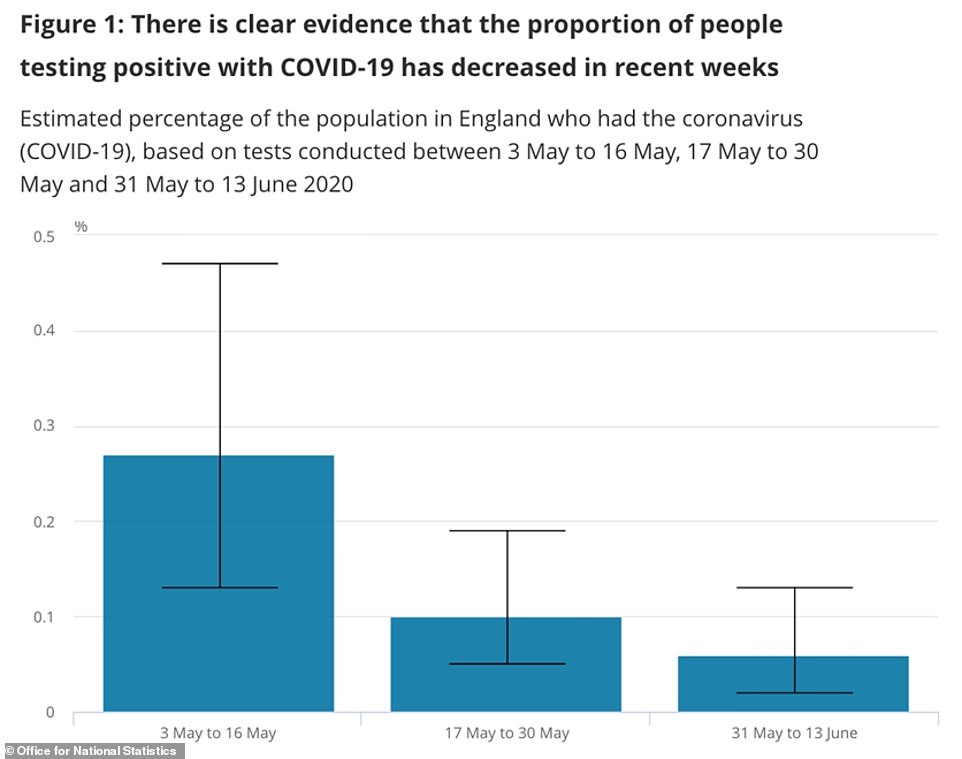 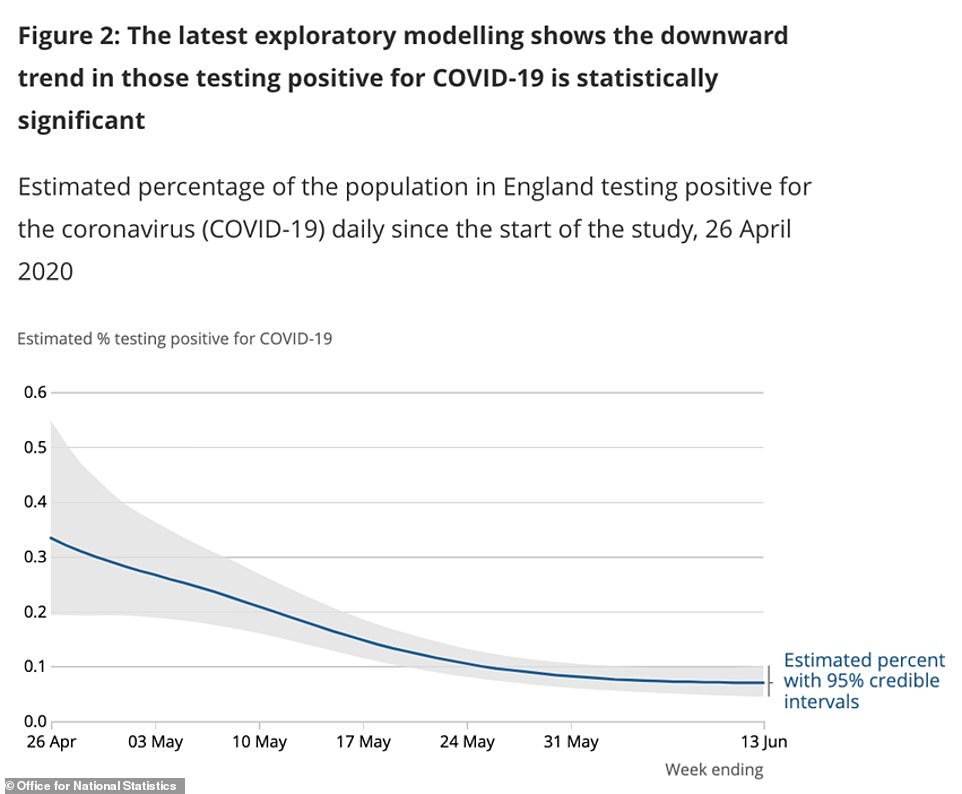 Professor Tim Spector, an epidemiologist at King’s, has been running the COVID Symptom Tracker app project alongside health tech company ZOE since March.

He said: ‘These latest figures are good news for the UK. We are seeing the R value holding stable below 1 and at the same time we are seeing the number of new cases continuing to fall across the UK.

‘In most areas the rate of new population cases is less than one in ten thousand. With the changes in the regions, the gaps we were seeing just a few weeks ago are closing, particularly the North-South Divide.

WHICH REGIONS ARE SEEING THE MOST DAILY COVID-19 CASES?

The COVID Symptom Tracker app data has estimated the total number of new coronavirus cases each day in Britain to be 3,612, as on June 13.

This is how the daily cases break down in its estimate:

‘We still aren’t seeing the numbers coming down in the same way in London and the South East, where we need extra vigilance, especially with shoppers heading back to the high street and social interactions between wider family groups increasing.’

Last week the team used this data to estimate that there were 4,942 people catching the virus every day in Britain, and today they said this appears to have dropped 26.9 per cent to 3,612. The figure was higher than 11,000 per day a month ago.

The estimate does not include Northern Ireland or care homes, where the virus is still thought to be spreading, meaning the true rate could be much higher.

The team running the mobile app ‘COVID Symptom Tracker’ have been collecting data from people self-reporting symptoms and test results for months.

The data in this week’s update was taken from one million people’s self-reports on their own health, and the results of 17,984 swab tests taken by app users.

People are asked to log on regularly to report whether they have any signs of illness or whether they feel healthy.

They are asked to get tested if they have symptoms that may be linked to Covid-19, and to report the results of the test.

Because of this, the app cannot reliably track the number of people who are catching the virus but not developing symptoms, which may be thousands more.

The Office for National Statistics, the governmental stats department, collects data differently and uses regular testing of a representative sample of the population.

ONS experts then estimate the levels of infection based on how the proportion of that group testing positive changes over time.

Last week the ONS suggested that 4,514 people per day were catching the coronavirus and approximately 33,000 people had it at any time in England.

The daily estimate has dropped this week to 3,800 but the total number of people thought to be infected remains at 33,000 — 0.06 per cent of the population.

The ONS said only around one in 1,700 people now have the illness and that ‘the number of people in England testing positive has decreased since the study began on 26 April’. It added, however, that the decline appears to have slowed recently.

But the drawback of the ONS data is that it does not include people who are diagnosed in hospitals or care homes.

Dr Paul Birrell, a researcher at the University of Cambridge, who has been working with Public Health England on different predictions, said none of the estimates are perfect.

He said: ‘The symptom tracker tracks only symptomatic infection. You would need to add the asymptomatic proportion onto this to get a number comparable with our estimate. Unfortunately, this proportion isn’t well known.

‘Analysis of data from the cruise ship outbreaks suggest this is about 50 per cent, whereas the ONS study says that as many as 70 per cent are asymptomatic.’

The COVID Symptom Tracker team have also used their data to estimate the reproduction rates of the virus in each region of the UK.

The R rate indicates how many people each infected patient passes the disease on to, and must remain below 1, on average, in order for the outbreak to shrink.

Professor Spector and his team worked out the R by comparing its changing estimates of numbers of people with the disease with the time it takes for cases to spread.

They estimate that the R value for the UK and England as a whole is 0.8. In London and the South of England it’s predicted to be 0.9, while it is 0.8 in the Midlands and 0.7 in the North and East.

The Government’s official estimate suggests that the R is between 0.8 and 1.0 across England and 0.7-0.9 over the whole UK.

WHAT ARE THE DIFFERENT ESTIMATES OF NEW DAILY INFECTIONS?

The number of people catching the coronavirus each day in England remains a mystery as official estimates continue to reveal wildly varying statistics.

A project run by Public Health England and the University of Cambridge predicted in the first week of June that 16,700 new infections are cropping up each day.

But the Office for National Statistics, which calculates a weekly measure, suggested at the same time that only 5,570 people were catching the virus on a daily basis, on average.

And an unofficial app being run by King’s College London, based on people self-reporting their symptoms, put the estimate at 9,400 new cases each day.

Experts explained that the difference between the figures is caused by them recording different things. While the PHE and Cambridge project aims to give a nationwide picture, the ONS does not include people catching the virus inside hospitals and care homes.

The app run by King’s College, on the other hand, only counts people who get symptoms – and many don’t. All the figures should be taken with a pinch of salt and used together, scientists said. 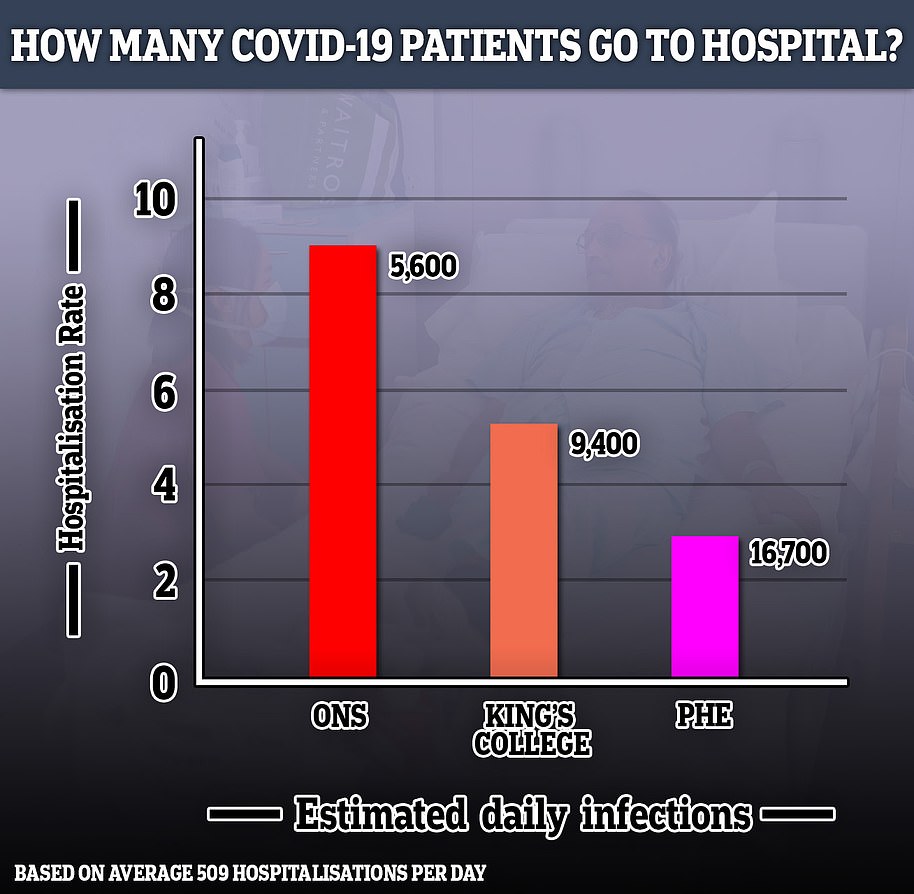 Estimates of the number of new infections can shine a light on the true hospitalisation rate of people who get the virus – if 5,600 people are catching it each day, as in the ONS estimate, the hospitalisation rate is around 9.1 per cent, whereas if PHE’s estimate is closer to the truth with 16,700, the rate is more like three per cent

The ONS’s estimate is based on swab testing samples which it has sent out to almost 20,000 people in 10,000 homes across the country. It predicts only new cases in the community, not hospital patients who people who live in institutions or homes.

Public Health England scientists, meanwhile, have been working with the University of Cambridge to produce their rolling ‘nowcast’ of the country’s current situation.

A separate estimate by the King’s College London team behind the COVID Symptom Tracker mobile app collects government data and numbers from people reporting their symptoms through the free-to-use public app.

As a result, it almost exclusively picks up people who have symptoms while ill with the virus, which scientists know doesn’t apply to everyone.

Dr Paul Birrell, a Cambridge researcher and part of a team of scientists on the PHE project, explained: ‘The symptom tracker tracks only symptomatic infection. You would need to add the asymptomatic proportion onto this to get a number comparable with our estimate. Unfortunately, this proportion isn’t well known.

‘Analysis of data from the cruise ship outbreaks suggest this is about 50 per cent, whereas the ONS study says that as many as 70 per cent are asymptomatic.

The ONS and King’s College app, therefore, aim to pick up almost the exact opposite groups of people.

ONS home testing intends to get results from people who do not know they have the virus but testing them regularly, regardless of how they feel.

The COVID Symptom Tracker, meanwhile, is based largely on people reporting their symptoms and updating the system if they get tested. It also collects reports from people who say they don’t have symptoms.

Dr Birrell added: ‘ONS study estimates only infection in the community. They’re not sampling people living in institutions such as care homes, long-term hospital residents or prisons… where one might expect the prevalence and incidence of infection to be higher. I’m not sure this is enough to bridge the gap entirely.’

When asked which set of figures people should believe, he said: ‘Nobody definitively. We’ll be working closely with the ONS to see if we can unpick the differences over the coming weeks.’