Britain today announced another 184 Covid-19 deaths as data revealed the number of daily fatalities has dropped 25 per cent in the space of a week.

Department of Health figures show 245 lab-confirmed deaths were recorded in all settings last Wednesday — and they reveal the number of laboratory-confirmed victims has now surpassed 42,000.

Most of the patients who died after testing positive occurred in England (168). Wales recorded ten more fatalities, followed by five in Scotland and one in Northern Ireland.

Daily and weekly data show the Covid-19 outbreak is continuing to fade across the UK, with 1,025 deaths recorded in the past seven days — compared to 1,400 in the week between June 4-10.

It comes after an Office for National Statistics report yesterday revealed London became the first region where the number of people dying of any cause has fallen below average, for the first time since March.

Figures revealed the number of people who died of any cause in the capital was 2.8 per cent lower than average between May 30 and June 5 — 891 down from 917.

The falling numbers of deaths and plateau in new cases means that the UK can continue to push out of lockdown. ‘Non-essential’ high street shops reopened to the public for the first time on Monday and a further loosening of rules is expected in just two weeks’ time.

In other coronavirus news today: 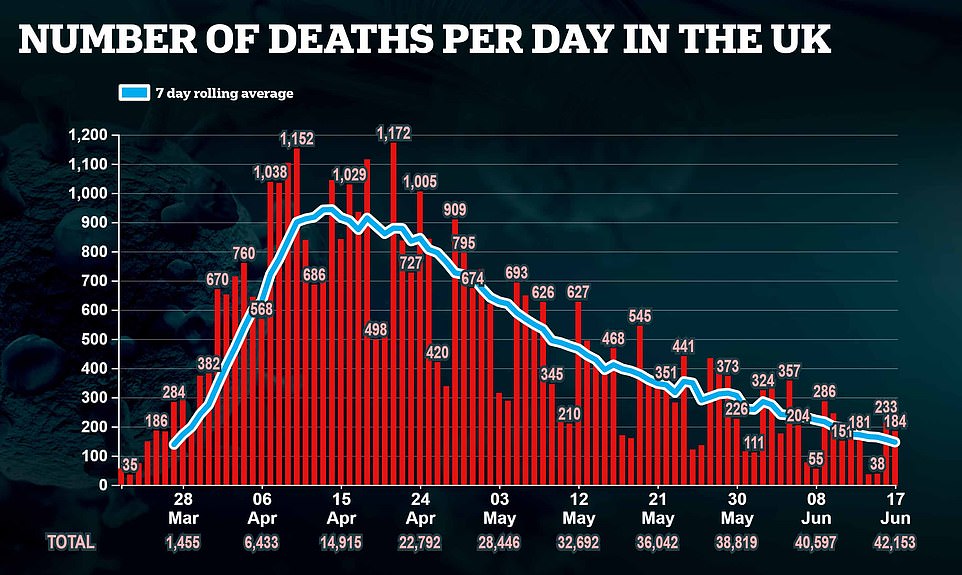 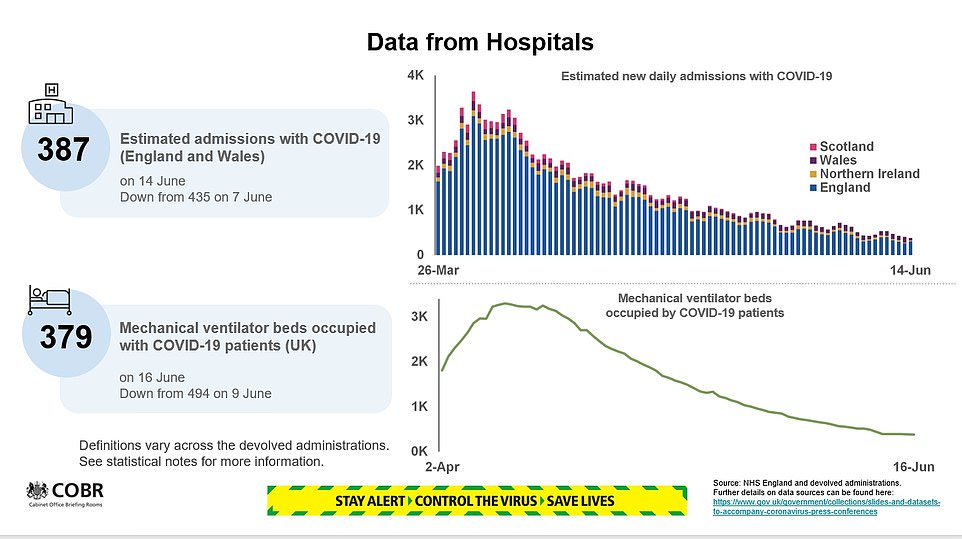 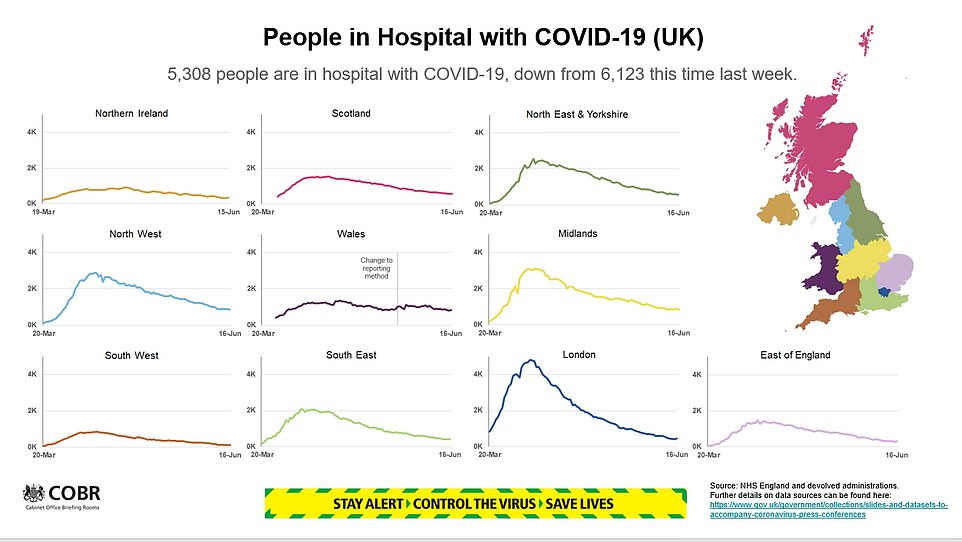 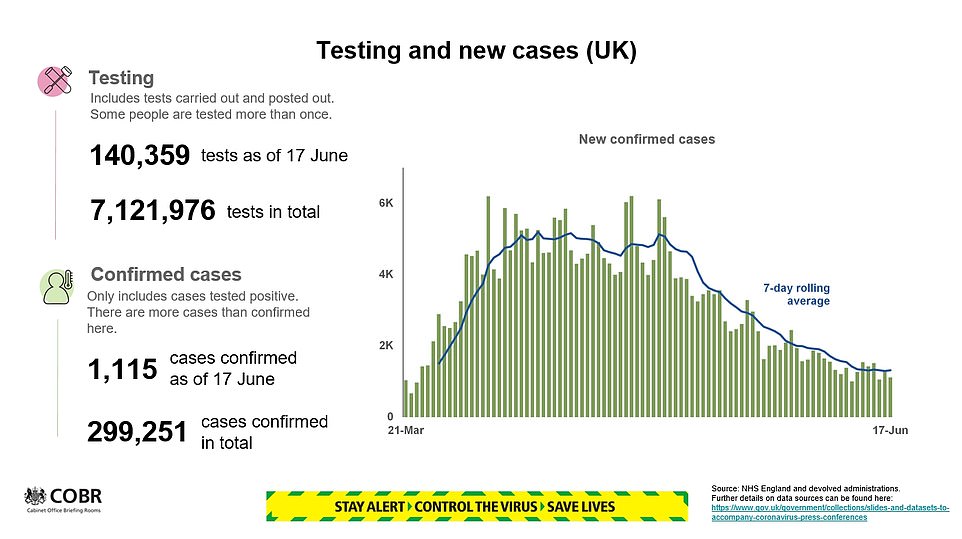 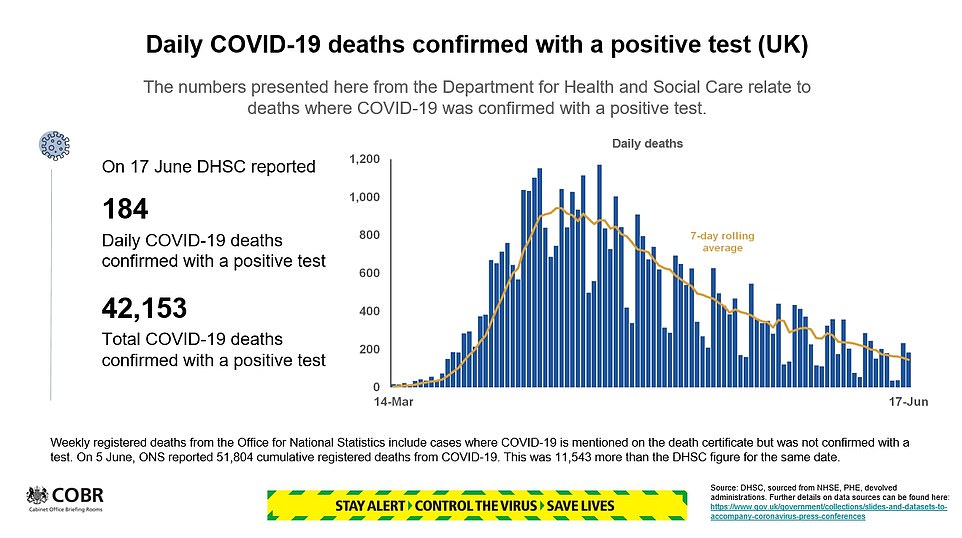 Britain ranks near the bottom of a damning global league table that compares how countries have tackled the Covid-19 pandemic.

Only Belgium fared worse, according to a review of testing, healthcare and death rates that gave 21 OECD member nations a score out of four.

The UK (2.22) was on par with Italy and Spain. Sweden, which controversially bucked the trend and opted against imposing a lockdown, scored higher (2.56).

Analysts behind the report claimed the low scores recorded for both Spain and Italy were ‘understandable’, given they were the first in Europe to be hit.

They said the UK’s response was too slow even though it had ‘time to prepare’, and also blamed a lack of testing capacity and the controversial decision to abandon contact tracing in March.

New Zealand fared the best (3.67). The US — whose performance was ‘not as poor’ as the death figures suggest — came mid-table (3.11), the report revealed.

Department of Health data released today showed that 140,359 tests were carried out yesterday, a figure that included antibody tests for frontline NHS and care workers.

But bosses again refused to say how many people were tested, meaning the exact number of Brits who have been swabbed for the SARS-CoV-2 virus has been a mystery since May 22.

Other data released by the Department of Health showed 1,115 more people tested positive for Covid-19, taking the official size of the outbreak to 299,251 cases.

The data does not always match updates provided by the home nations. For example, the Scottish government today announced nine deaths – but the DH only recorded five north of the border.

The Department of Health has a different time cut-off, meaning daily updates from Scotland as well as Northern Ireland are always out of sync. Wales is not thought to be affected.

NHS England recorded 77 laboratory-confirmed deaths in hospitals across the country. Wales recorded ten in all settings, followed by nine in Scotland, and none in Northern Ireland.

Today’s statistics come as movements in the Government suggest people could still be allowed to travel abroad on holiday this summer without facing a fortnight in isolation afterwards.

While the 14-day self-isolation for arrivals from countries where coronavirus is ‘out of control’ like Brazil, countries with far lower numbers of cases could be exempted, the Health Secretary said this morning.

Matt Hancock refused to divulge which countries could be included but confirmed he and Transport Secretary Grant Shapps are a working on a list of these countries and it will be published before the quarantine is reviewed on June 29.

The comments will bring hope to millions of Britons desperate for a summer break. But it remains to be seen which countries will want to welcome UK visitors, with the country having the highest death rate in Europe.

Only yesterday, New Zealand’s 24-day coronavirus-free streak came to an end when two British visitors tested positive for the disease, which the Prime Minister Jacinda Ardern said ‘should never have happened’. 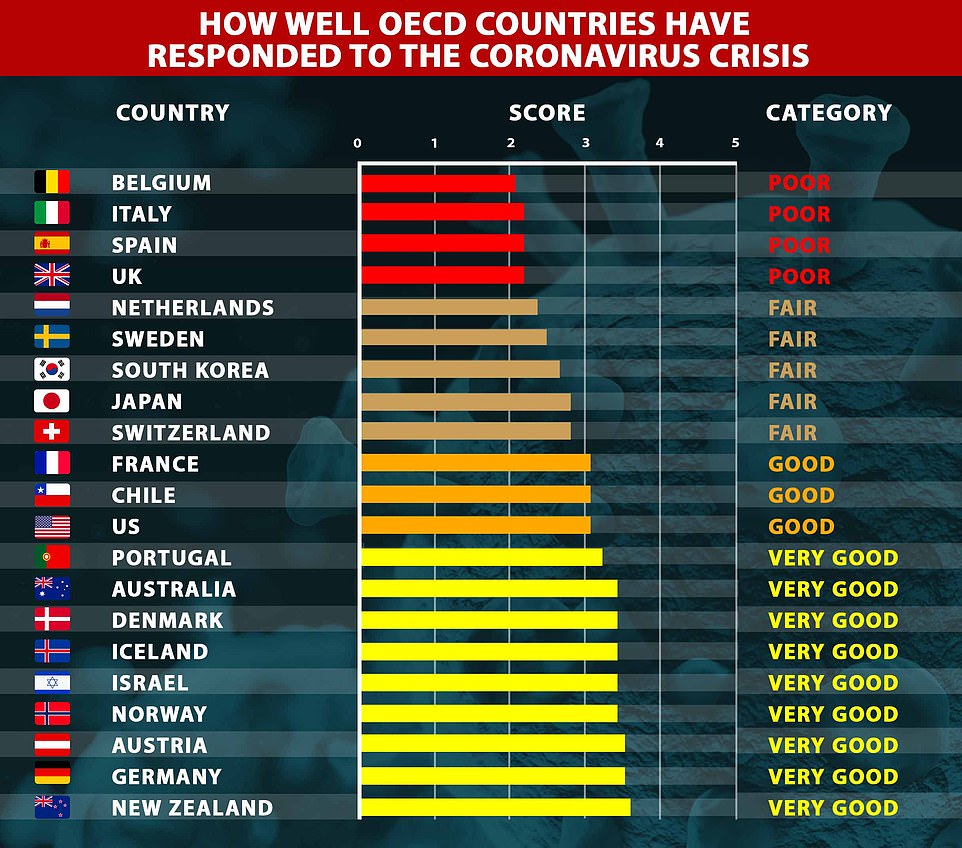 US researchers suggest China covered up the true size of its epidemic and used the activity of crematoriums in Wuhan to try and calculate accurate numbers.

They found the city — which is where the pandemic began in December — may have been burning between 800 and 2,000 bodies every day by the second week of February, when the official death toll for the whole of China was only around 700.

Reports of 86 Wuhan crematoriums operating 24 hours a day at full capacity raises suspicion that the number of people dying was more than just hundreds, they said.

Funeral homes were also buying thousands of urns for ashes and the study suggests that, by March 23 — when the UK went into lockdown — around 36,000 people had died in Wuhan alone. The official number for all China at the time was 2,524.

Beijing says there have now been 4,634 deaths from Covid-19 and 83,265 diagnosed cases. Figures show 98 per cent of recorded coronavirus fatalities have occurred in Hubei province, which Wuhan is the capital of.

The study adds to claims that China has not been transparent about exactly how bad the Covid-19 outbreak was there, which experts say influenced other countries.

The World Health Organization (WHO) has been criticised for not pressing Chinese officials hard enough about the accuracy of their data.

Fresh concerns emerged this week now that there are reports of a second Covid-19 wave in Beijing, with one expert suggesting China will not be straight about this one, either.

Mr Hancock told the BBC’s Today programme that the quarantine would have to stay for places where the disease is still rife. He cited Brazil as an example.

‘Having said that there are other countries where it may be safe to not have a quarantine in place in the same way,’ he added.

‘Ahead of the formal legally-required review of the quarantine arrangements on June 29 I am working with Grant Shapps on whether there are countries that have a low rate of infection, where we trust their figures, where the infection isn’t going up and we can have that discussion with the other country, and come to an agreement on a travel corridor.’

Meanwhile, ministers are under fast-growing pressure to let more children return to school with experts warning an entire generation could suffer lasting damage from the months they have spent out of education.

More than 1,500 leading experts have signed a letter demanding Boris Johnson publish a clear plan for getting children back to school before a generation of pupils are left ‘scarred for life’.

In a scathing letter to the Prime Minister today, paediatricians warned the prolonged closure of schools could spark a wave of health, social and educational problems that linger ‘long after Covid-19’.

The Royal College of Paediatrics and Child Health (RCPCH) claimed millions of pupils were missing out on education and friendships, physical exercise and even free vaccinations against other illnesses.

But it is society’s most disadvantaged children who are bearing the brunt of the pandemic because they have been robbed of the safety net that school provides, according to the experts.

For these pupils and their families, interventions such as free school meals and mental health support are ‘the difference between surviving and thriving’, the letter says.

Schools have been closed to the majority of pupils since March 20 in a desperate bid to curb the spread of the coronavirus. But official figures have shown children are more likely to be hit by lightning than die form Covid-19.

Wales has published detailed plans to get a third of youngsters back in classrooms by the end of the month, while Scotland has set out strategy to reopen schools in August.

But the UK Government – which initially ordered schools to go back this month then U-turned – continues to flip-flop over its plans and has highlighted September as the arbitrary date on which classrooms must reopen.

Private schools, fed up with the lack of direction from ministers, are understood to be planning to open at the new academic year ‘come what may’ regardless of what the official advice is.

Meanwhile, teaching unions have been accused by MPs of running a ‘disgraceful political campaign’ to keep classrooms closed by making parents fear they are ‘deathtraps’. 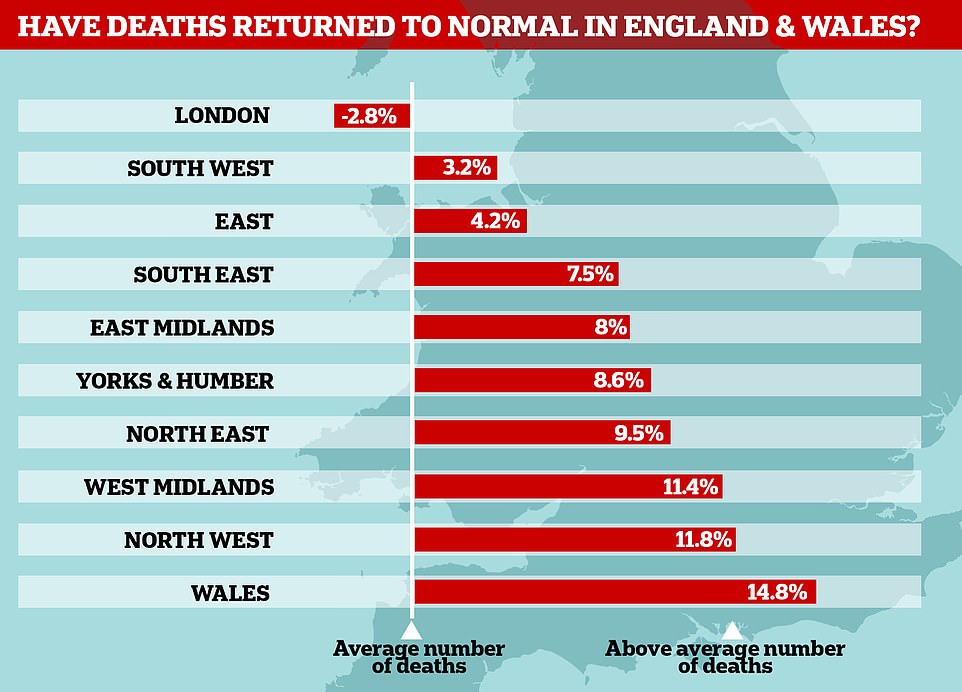 Data from the Office for National Statistics yesterday showed that the number of people dying of any cause in London had dropped to below-average levels by the end of May, showing the coronavirus is now barely affecting the city’s death rate. This was the first time any region had recorded a negative value since the outbreak began

Crackpot ‘Flat Earthers’ break quarantine trying to ‘reach the end of the world’ during...

Over a million kids missing school during wave of suspected Covid...

CDC advises Americans to not trick-or-treating or to costume parties in...