The number of deaths in England and Wales was actually lower than average before Covid-19 struck the UK, researchers have found in a discovery they have branded the coronavirus paradox.

Academics say protective measures used to fight Covid-19 — such as encouraging people to social distance and wash their hands more often — appear to have curbed the spread of other nasty illnesses such as flu, too.

As a result of people being ‘afraid of the virus early on’, there were fewer car crashes and holiday-related accidents such as skiing injuries. And people spent less time in hospital, meaning they were at less risk of healthcare-acquired infections such as MRSA and dying from major surgery.

Official statistics show the number of fatalities surged when the virus hit Britain, with more than 60,000 ‘excess’ deaths recorded already this year. Experts analysed data recorded by the Office for National Statistics and found there were 4,822 fewer fatalities than usual between January 3 and March 20.

They compared weekly deaths from any cause with the average number usually seen on that same date, taken from combined data over the past five years.

The drop in deaths, they said, has not been seen in any other year that they studied, meaning the pandemic was almost certainly the cause. They dubbed it the ‘SARS-CoV-2 Paradox’. 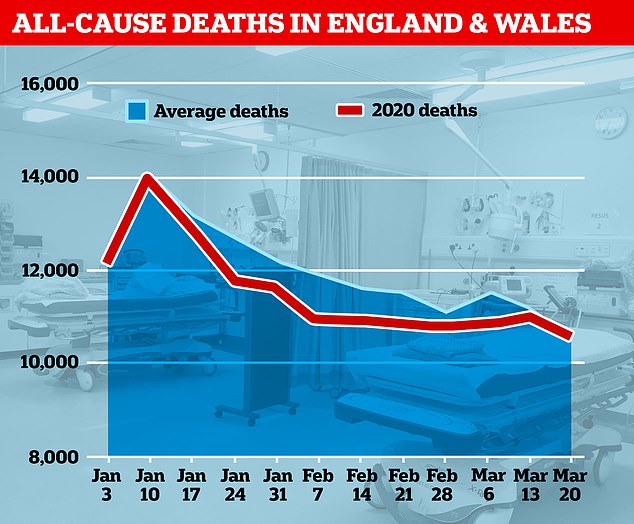 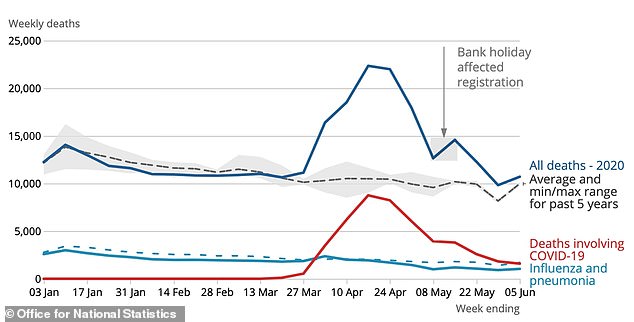 Office for National Statistics data shows the number of deaths of any cause (dark blue) dipped below average (dotted line) for most of January, February and March before the spike caused by coronavirus fatalities

Deaths had risen back above average by March 20 — the week before the lockdown was imposed — after nine consecutive weeks below average.

The biggest gap was seen in the week ending February 7, when there were 939 fewer deaths than usual — down eight per cent.

The scientists suggested that early advice for people to protect themselves from the coronavirus, known as SARS-CoV-2, played a role in the drop.

But they offered no explanation as to why deaths started to drop in January — before the virus had reached Britain and little was known about it.

British officials issued advice at the start of February for people to use tissues and to wash their hands more than often to protect themselves.

And people were likely starting to social distance and travel less for long before they were advised to do so, and later forced to, in March, the researchers said.

People could have picked up fewer other infections because they were working from home and not travelling as much, the study suggested.

It claimed, as a result, people spent less time in hospital due to the drop in flu cases, fewer car crashes and holiday-related accidents such as skiing injuries.

And less time in hospitals led to fewer hospital deaths, such as those during or after surgery or as a result of infections like MRSA, which can spread on wards.

Professor Theo Arvanitis, one of the lead authors of the study, said it showed people may have been afraid of the virus early on.

He said: ‘Each year, infectious diseases make a significant contribution towards avoidable deaths in England and Wales.

‘Social distancing measures are likely to impact the spread of all infectious diseases, despite their target being a reduction in the spread of SARS-CoV-2 virus.

‘This lack of disease spread could be causing a reduction in death rate.

‘Another factor could be concerns around the virus, which could mean people are making more conscious health decisions in terms of eating, exercise, reducing smoking and resting when they feel unwell, or seeking advice from 111 about their symptoms.’

Although the death rate seemed to drop before the virus hit, Professor Arvanitis said there could be more deaths later in the year.

Scientists have repeatedly raised concerns that fewer people have sought medical treatment during the pandemic, out of fear of going to hospitals or to avoid putting pressure on the NHS, which could mean their illnesses got worse unchecked.

Professor Arvanitis added: ‘It is important to note that whilst we have seen a reduction in mortality in the “run-up” to seeing the full extent of SARS-CoV-2 that this may also have negative future consequences.

‘It is possible that we may see a significant rebound if this mortality has simply been delayed rather than avoided in its entirety.

‘If a rebound effect is seen, this may coincide with the peak demand for SARS-CoV-2 medical beds, creating an even greater healthcare need.’

The study was published in the Journal of International Medical Research.

DID UK’S CORONAVIRUS CRISIS PEAK BEFORE LOCKDOWN BECAUSE PEOPLE WERE SOCIAL DISTANCING VOLUNTARILY?

Britain’s coronavirus outbreak may have been under control before lockdown was enforced, according to a study that throws into question whether the draconian measures were ever needed.

Data modelling by a mathematician at Bristol University suggests the spread of Covid-19 throughout the UK had peaked days before Boris Johnson introduced the unprecedented curbs.

The calculation is based on a growing body of data that indicates the average Covid-19 victim dies 23 days after being infected.

The darkest days in the UK’s outbreak were on April 8 and 9, when more than 2,000 people passed away from the virus, official figures show.

Professor Simon Wood believes most of these patients were infected between March 18 and 19 – 23 days earlier – and five days before the country locked down. 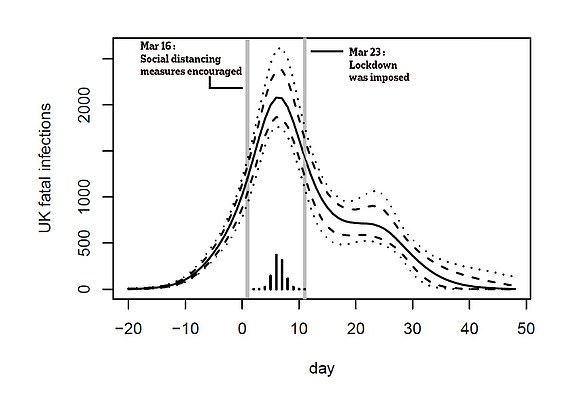 Modelling by Professor Simon Wood shows the spread of the virus had already peaked several days before the draconian curbs were imposed and was falling. The grey line marks March 23, when the UK locked down.  The darkest days in the UK’s outbreak were on April 8 and 9, when more than 2,000 people passed away from the virus. Professor Simon Wood believes most of these patients were infected between March 18 and 19 – 23 days earlier – and five days before the country locked down

He claims that banning large gatherings and telling people to keep two metres apart would have been sufficient to keep the virus under control.

The study throws into question whether Britain’s lockdown was needed amid claims social distancing policies announced on March 16 curbed the crisis on their own.

It came after similar research in Norway also found the spread of the virus fell fairly quickly there by the time people were ordered to stay at home.

Camille Stoltenberg, head of the Norwegian Institute of Public Health (NIPH), even admitted last month that locking down was unnecessary.

Professor Wood said: ‘The most notable feature of the results is that fatal infections are inferred to be in substantial decline before lockdown.’

He said it was possible that social distancing ‘might have done the trick’ in bringing down Covid-19 cases and deaths without heavy-handed measures.

On March 16, the UK Government launched a public information campaign urging people to wash their hands and keep two metres (6’6′) away from others.

Many Britons were already working from home, shops, restaurants and gyms were closing and large public gatherings had been banned.

He said it was difficult to be certain when infections peaked in Britain because widespread testing was abandoned in mid-March.

However his analysis also showed that Sweden’s infections peaked just a few days after Britain, even without a lockdown.

It suggests the UK’s crisis would have followed the same trajectory with the less severe social distancing rules.

Professor Wood said if a second wave hits Britain then ministers should consider ‘ethical issues’ of locking down again and whether it would claim more life than it saves.

Buffalo protestor, 75, who fractured skull when pushed to ground by a cop leaves hospital after 26 days

Queen of the South season 5: Teresa star teases character's return 'Anything can happen!'