Coronavirus has become a dire situation for states like Texas, Arizona and Florida – and the latest projections suggest it will only get worse over the next month.

Models created by the Children’s Hospital of Philadelphia (CHOP) PolicyLab and updated on Wednesday predict that cases will only continue to surge in these states, as well as ‘spread’ to towns and cities that neighbor those with significant outbreaks, including rural Colorado, parts of Delaware and cities in Ohio.

The researchers noticed a disturbing trend: emerging hotspots seem to be cropping up along interstates like I-95 as the virus travels US highways with migrating people.

And perhaps more concerning still, previous hotspots – such as Chicago, Minneapolis, Philadelphia and Baltimore – are showing signs that they may be poised for resurgences.

The CHOP PolicyLab researchers’ forecasts come as eight states hit their respective record high single-day infection numbers yesterday and Another 47,000 cases were added to the US total.

Echoing Dr Anthony Fauci’s warning that the US could hit 100,000 infections a day if things continue this way, the CHOP experts urged that Americans not become or continue to be lax about measures to curb the spread, such as avoiding large groups and wearing masks. 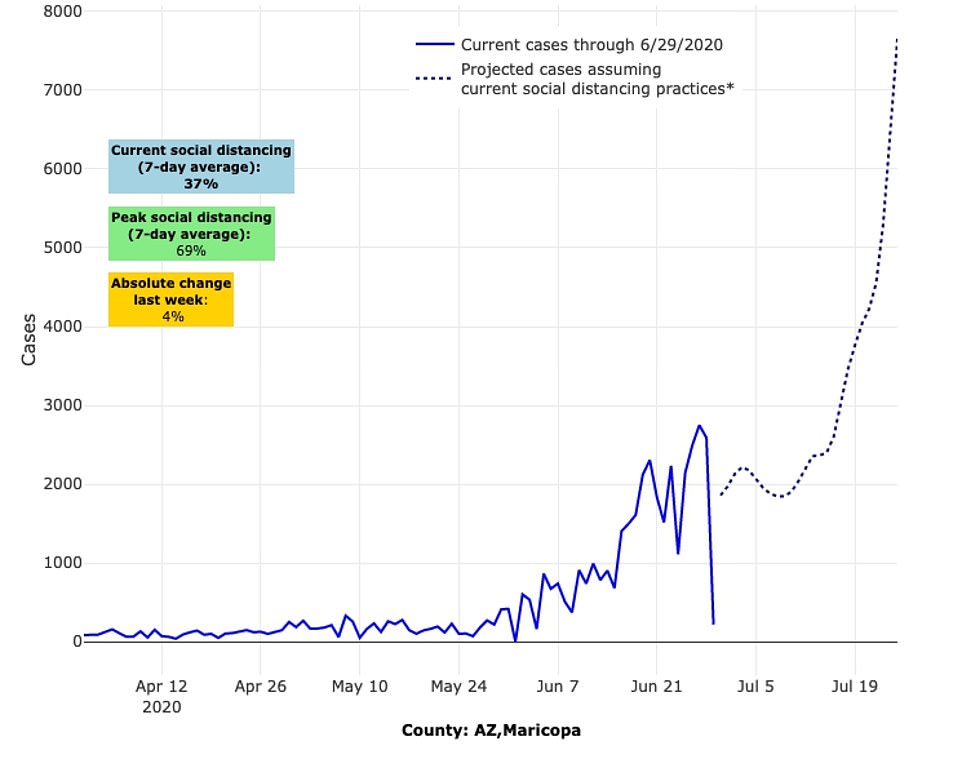 Researchers from Children’s Hospital of Philadelphia’s PolicyLab project that hard-hit parts of Arizona, like Maricopa County, will continue to see steep rises in daily infections for weeks to come before the state can flatten its epidemic curve 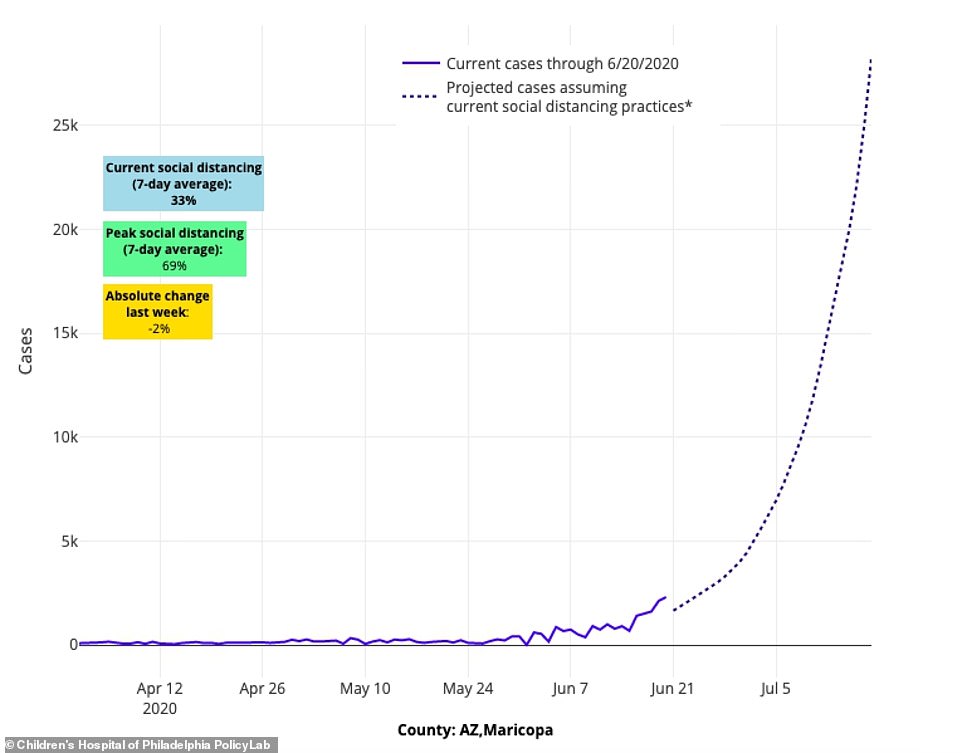 CHOP now predicts Maricopa County’s daily infections will rise to 8,000 – modest, compared to its previous June 24 prediction that the Arizona county would see more than 25,000 cases a day by mid-July (above)

‘We need to admit that we are losing the battle nationally to contain this dangerous virus as it engulfs more communities across the country, including those in the Northeast and Midwest that worked so hard to reduce cases and get back to a relatively normal way of life,’ said Dr David Rubin, director of PolicyLab at CHOP and a professor of Pediatrics at the University of Pennsylvania’s Perelman School of Medicine.

In March and April, cities like New York and Chicago were struck fast and hard by coronavirus outbreaks. National attention turned next to Michigan, where there were 1,953 infections in a single April day at the peak of the state’s outbreak.

The three were among the first places dubbed hotspots, and the steep rise of cases in New York City threatened to overwhelm its hospital system.

Now, only between 60 and 70 percent of hospital beds in New York state are occupied.

Illinois recorded its record low number of deaths in a single day – 12 – on Monday.

Michigan started handing out face masks on its public transit vehicles, slowed the spread, and quietly slipped from the ‘hotspot’ category by the end of April.

But then people began to return to fairly normal life, including going to bars. Since a dozen cases were first linked to Harper’s Brewpub in East Lansing on June 23, the number of infections traced back to the bar has ballooned to 138. 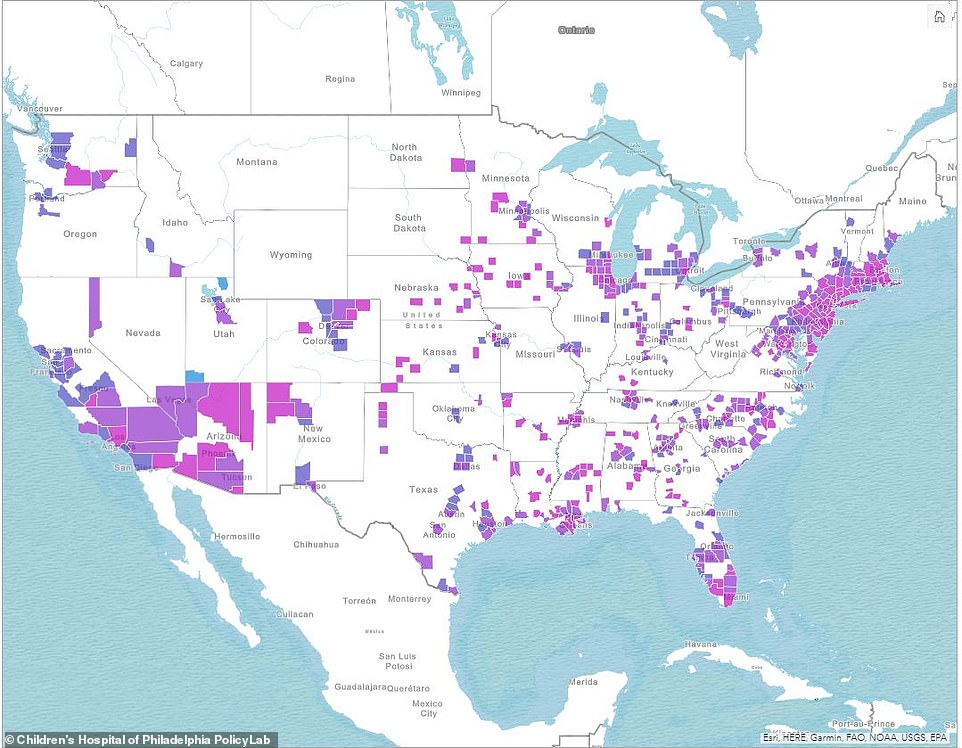 Currently, Maricopa County, Arizona, many counties on the East Coast, in Southern Florida, and a smattering of counties in the Midwest, South and West of the US have more  than 1,000 cases per 100,000 people, but CHOP scientists predict burgeoning outbreaks along some interstates as vacationers travel this summer

Cases are creeping upward again in cities like Minneapolis, Philadelphia and Baltimore too.

The CHOP team noted that burgeoning hotspots are appearing along I-80, moving from central Illinois into Iowa, and on I-90 North into upstate New York.

With summer upon the US, a stop to interstate travel is unlikely, but other potential stopgaps to slow the spread of coronavirus are lacking.

‘During a heavy travel season, the absence of a strong national response, including a nationwide masking mandate, will continue to threaten the viability of our economy and the ability of our schools to reopen in the fall, while depleting and surpassing available health care resources to care for the sick,’ said Dr Rubin. 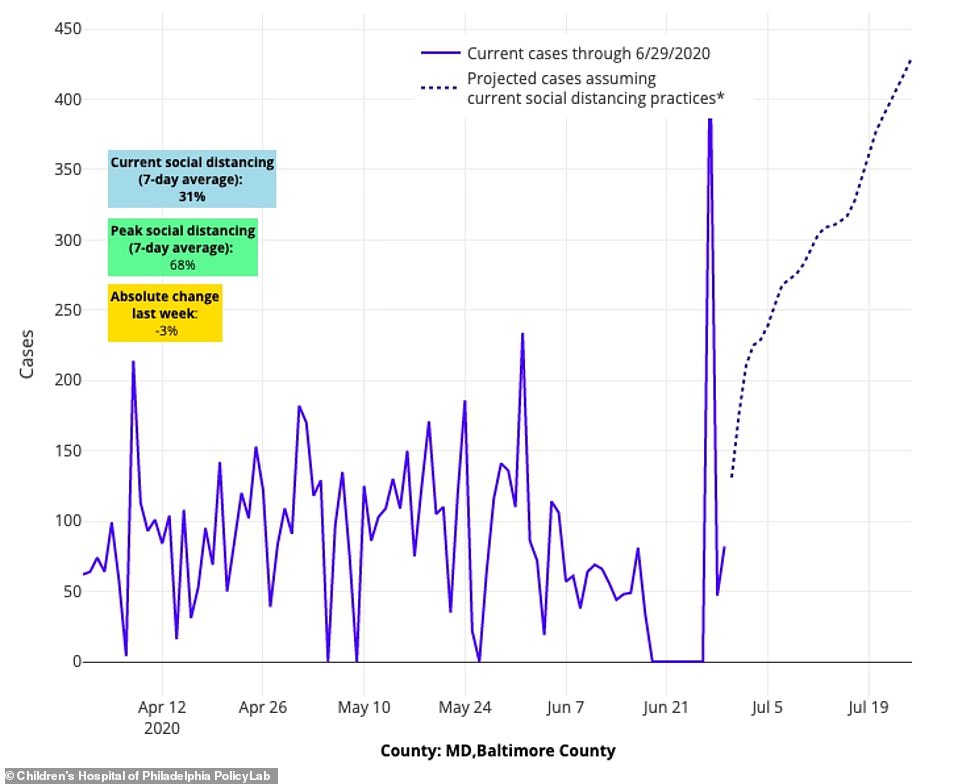 Patterns in Baltimore, which seemed to get its coronavirus outbreaks under control, suggest daily cases could surpass 400 by mid-July after the Maryland county saw a massive spike at the end of June

‘What’s even more worrisome is that we’ll soon add July Fourth travel to this challenging situation – vacationers will be visiting locations that even during the Memorial Day holiday had relatively low disease activity – but are quite the opposite now.’

On the East Coast, Delaware has been only moderately affected by coronavirus.

But with reopenings and warm weather, travelers flocked to its oceanside towns. Tuesday, John Carney ordered that beachfront bars in several towns close down ahead of the Fourth of July weekend after a sudden uptick in cases there.

In its last projections, published two weeks ago, PolicyLab warned that Maricopa County, Arizona, could see more than 20,000 new infections a day by mid-July.

On Wednesday, the state reported 4,900 new coronavirus cases and 88 deaths, the highest number yet in a single day, by far.

State governor Doug Ducey ordered bars, gyms and movie theaters to close and urged residents to wear masks outside their homes. Face masks have been made mandatory in the city of Phoenix (which is in Maricopa County). 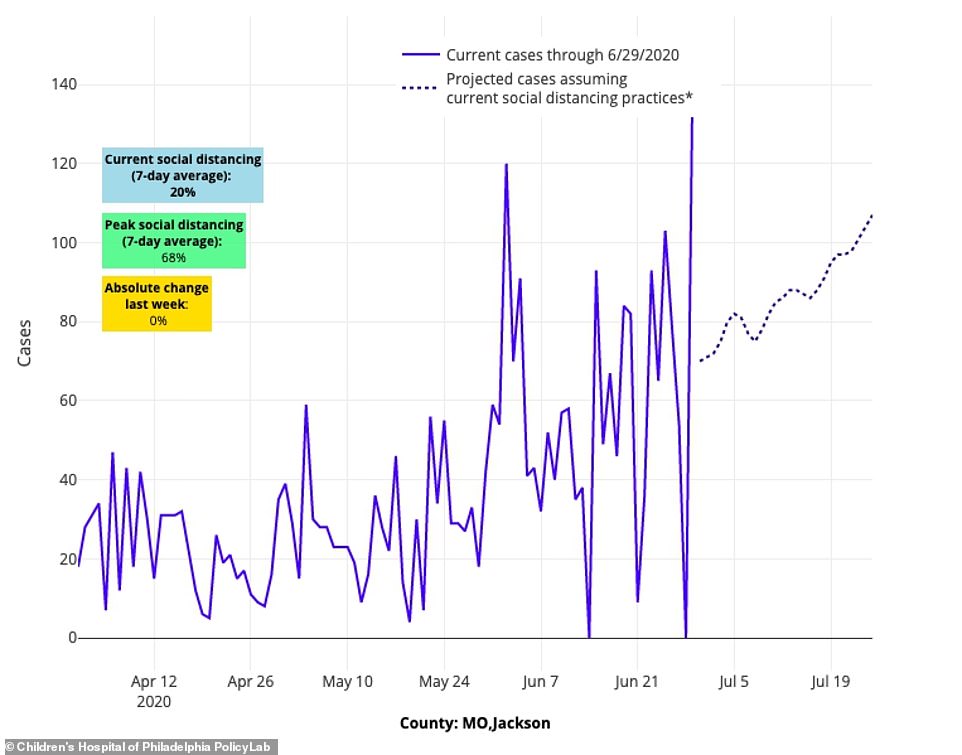 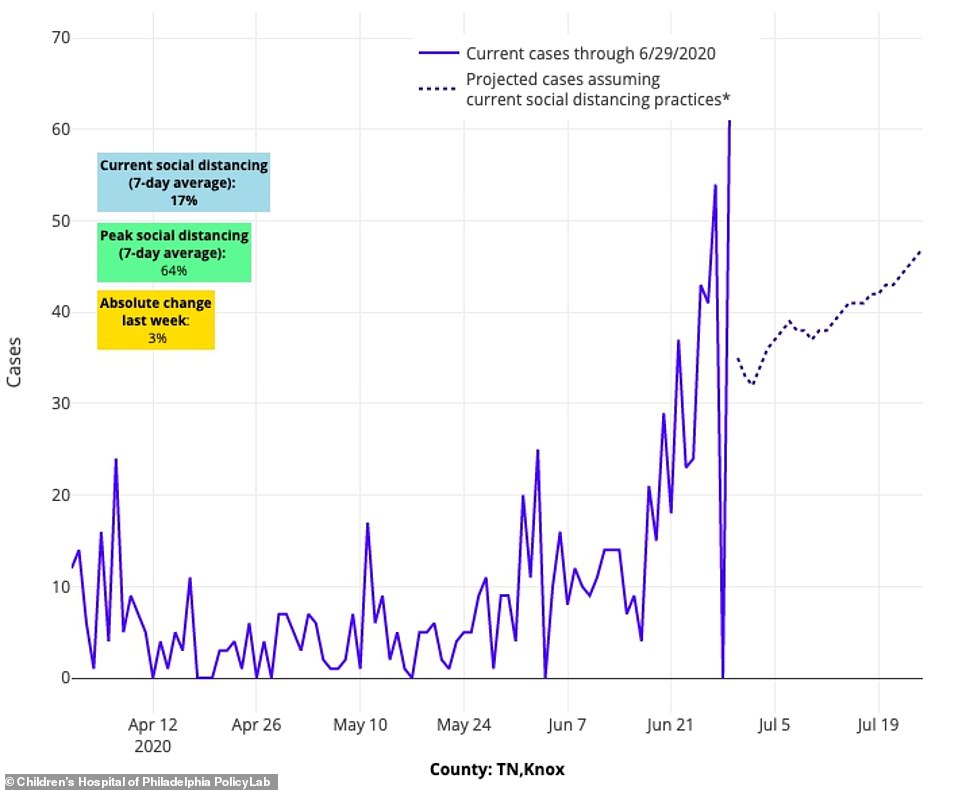 Even counties like Knox, Tennessee, home to several colleges, are set to see worrisome rises in cases, the CHOP investigators said Wednesday

Thanks in part to these measures, CHOP’s projected case numbers for the next month are considerably lower (but still appallingly high).

CHOP now projects that, by mid-July, daily cases in Maricopa County will near 8,000.

Although coronavirus outbreaks have seemed to bleed from community to community along interstate travel routes, that’s only one pattern of spread.

‘We don’t know whether it is fatigue and/or weak enforcement of city or state masking mandates, but our vigilance to properly protecting ourselves and those around us during a pandemic is eroding at a time when we need it most.

‘And it’s not just the big cities – college towns across the country, from Knoxville, Tennessee, to Lansing, Michigan, are joining the list, threatening the reopening of schools that seemed so possible just a month ago.’

Chinese man's big belly saves him from falling down well