A MYSTERY garden raider who steals gnomes and other ornaments is being hunted by police.

At least eight raids have been reported in three weeks.

Police are puzzled as the items pinched are not expensive and others are so big a car or van would be needed to take them away.

Pieces that have vanished from outside homes include ornamental sheep, two Chinese dragons and a pair of horse heads.

The thief even tried to carry away a concrete Buddha but is thought to have given up because it was too heavy. The thefts all took place in Carmarthenshire, South Wales — within a few miles of ­Carmarthen and Llanelli.

Mum Naomi Wilmot told how two gnomes in her Snow White and the Seven Dwarfs collection were stolen on different days. 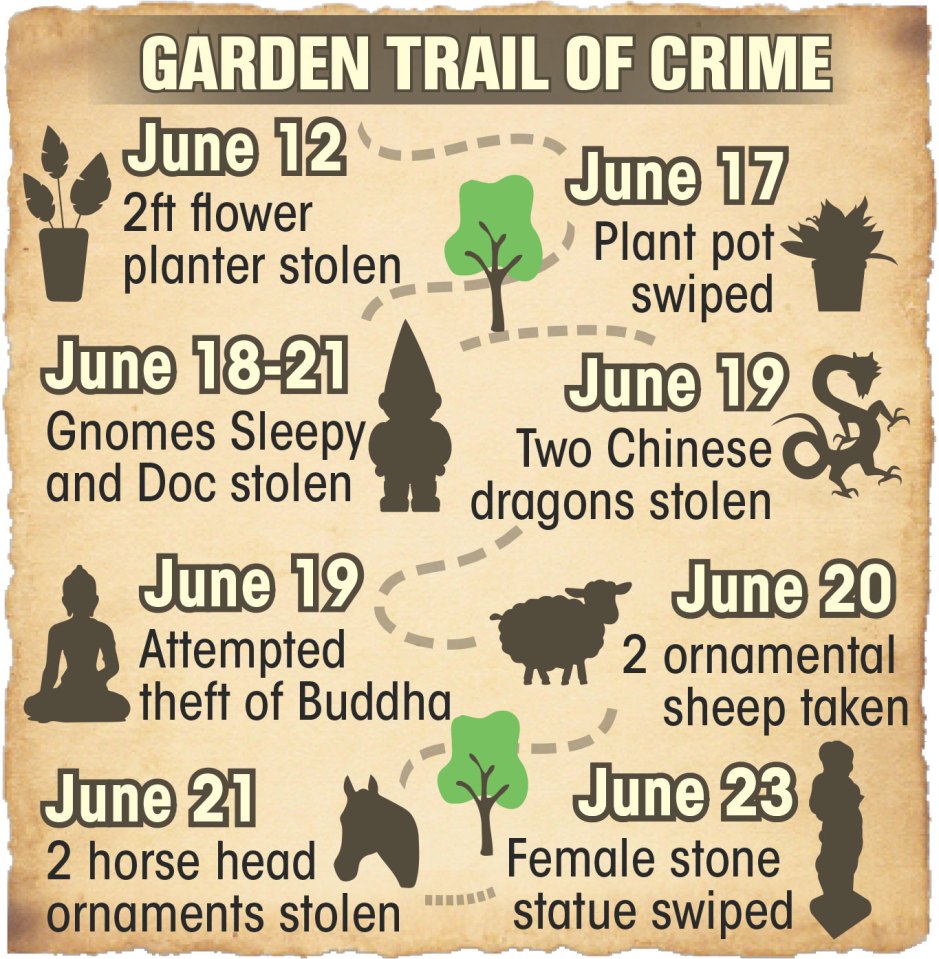 Naomi, of Trimsaran, said: “I was given these gnomes as a gift and I spent ages painting them.

“They were in the front garden and my husband noticed there were only six dwarfs. It turned out Sleepy had been taken.

“I thought someone was messing about but two or three days later I noticed Doc had gone as well!

“I don’t know if someone is doing it as some kind of joke — I was half expecting to receive a ransom note.”

The thief’s bizarre spree began on June 12 when a 2ft flower planter was pinched in the village of Foelgastell. It was followed by a plant pot theft in Trimsaran.

But it was the disappearance of Naomi’s gnomes that marked a switch to targeting ornaments.

The horse heads were snatched from gate pillars in Llanddarog.

The most recent incident was the removal of a stone statue of a woman in Foelgastell.


Gavin Williamson to give schools reopening update as deaths hit 43,906

Dyfed-Powys Police are appealing for information.

PC Jane MacDonald said: “We are treating them as linked as they are similar crimes committed so close together.

“This type of crime comes in waves and it is usually rural ­communities that are targeted.”

Naomi Wilmot said: “I was given these gnomes as a gift and I spent ages painting them[/caption]

Chinese dragons were taken from this garden wall[/caption]

Trump administration calls for masks throughout air travel, other guidelines for Covid-19 era