As the fall semester fast approaches, schools, public health officials and President Donald Trump are scrambling to work out a way to reopen academic institutions.

A new study by Yale University experts suggests it is possible after all – but only if every student gets tested every two to three days.

Keeping infections and potential fatalities to a minimum would also require other restrictions, like a shortened semester and moving any student with symptoms of coronavirus to an ‘isolation dorm.’

Testing only students with symptoms, or even testing every student just once a week, would allow coronavirus to spread to nearly every person on campus, the Yale model found.

Testing every one or two days would result in 60 to 160 infections at any point over the course of a stunted 80-day semester – a relatively tolerable number of sick students.

‘We believe that there is a safe way for students to return to college in fall 2020,’ the study authors wrote.

But doing so ‘sets a very high bar—logistically, financially, and behaviorally—that may be beyond the reach of many university administrators and the students in their care.’ 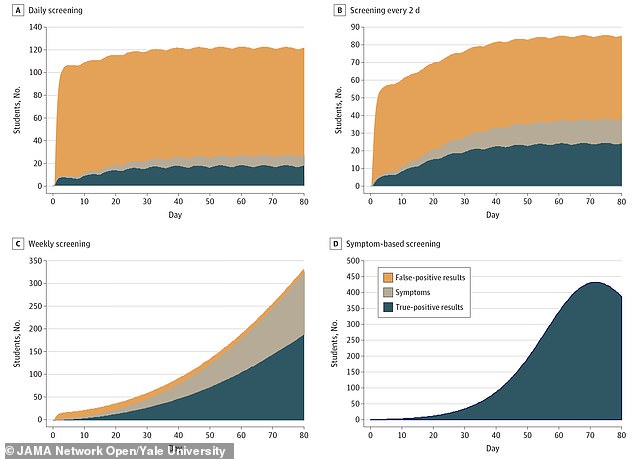 Testing only based on symptoms would lead isolation dorms to become overwhelmed a coronavirus spread to an entire 5,000-person student body (bottom left), but testing every two days (top right would keep infections relatively low – but cost millions of dollars

Using a hypothetical class of 5,000 students, of which 0.2 percent – 10 students – are asymptomatic carriers of coronavirus, few of the scenarios the scientists ran through their model can keep every student – in addition to faculty, staff and other community members – from contracting coronavirus.

They came to their recommendations for reopening schools by considering how much loss of life Americans are willing to tolerate compared to how much universities and families might be willing to spend.

In the study, published in JAMA Network Open on Friday, the Yale team came up with three scenarios: best, worst, and base.

Although new forms of testing that could be faster, more accurate, cheaper or all three may be on the horizon, the scientists estimated that each test would cost between $10 to $50 a piece (for both the test kit and associated costs like staff to administer the tests). 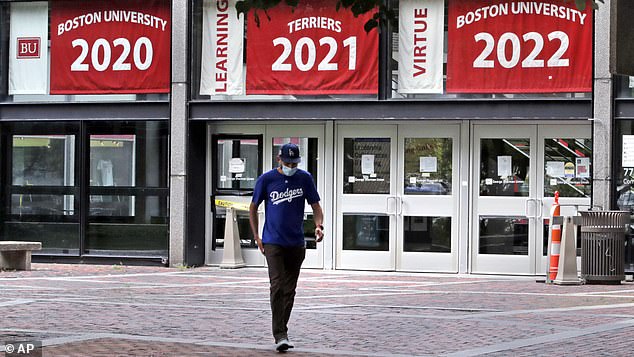 Schools like Boston University are frantically trying to decide whether and how to reopen this fall. BU will test its students, as will others, but with varying strategies (file)

Assuming schools would go with a less expensive test and move every student with symptoms or a positive test (whether false or true positive) to an isolation dorm, they found that the best-case scenario would be testing every two days, in which around 60 to 80 students would be in isolation at any given time, but most would be false-positives.

If screening was only done weekly, it would take longer for cases to be identified, but they would only go up. That would mean that, by semester’s end, more than 300 students would be in the isolation dorm, and up to 200 of them would be true positives.

Testing only those with symptoms would mean almost no false-positives, but more than 400, truly covid-infected students would be in the isolation dorm by the 70th day of school.

Screening that way would also lead to the entire student body getting infected – knowingly or unknowingly – before they even made it through 80 days of school.

Daily screening would have similar results for isolation, and keep the number of students who got infected to a minimum of 60 infected students at any given time.

In the worst case scenario (middle) even a perfect test, given only based on symptoms would not stop coronavirus from spreading to every student on a campus

But the cost would almost certainly be prohibitively.

Even with the cheapest, most inaccurate test daily screening of students would cost $48 million – about half of the combined tuition revenue the school would make from those 5,000 students.

Testing every two to three days was the most balanced outcome, resulting in about 106 infected students in the isolation dorms at any given point over the semester.

It would cost a somewhat more modest $24 million (still enough to send nearly 200 students to a public university for a year).

And their findings only account for the risk posed to students themselves.

‘Reopening college campuses imposes risks that extend beyond students to the faculty who teach them, the many university employees (administrative and facilities staff) who come into close daily contact with them, and the countless other members of the surrounding community with whom students come into contact,’ the authors wrote.

‘University presidents have a duty to consider the downstream effect of their reopening decisions on these constituencies.

‘However, their first responsibility is to the safety of the students in their care.’

Gemini August horoscope: Astrology reading for the month ahead - horoscopes for Gemini