RARE footage has emerged of scientists carrying out research at a Wuhan laboratory that has been previously criticised over broken equipment.

It comes after shocking photos from the Wuhan Institute of Virology showed a broken seal on a freezer containing 1,500 strains of deadly viruses – including the one linked to the Covid-19 pandemic.

A new video, released by Chinese state broadcaster CCTV in February, provides a glimpse into the facility.

In the clip, researchers can be seen analysing testing samples while wearing full personal protective equipment to avoid catching any disease.

A researcher, Zhang Huajun, also demonstrates how he and one colleague put on two layers of protective suits and pass five air-tight chambers before entering the core part of the lab.

Mr Huajun also said the building was designed in such a way that air can only flow into the lab from the outside, not the other way around, to prevent leaks.

The £34million laboratory – affiliated to the Chinese Academy of Sciences – was completed in 2015 and officially opened in 2018.

It is said to have three testing rooms, two animal storage rooms, one virus bank and one animal-dissection room.

Twenty-four scientists can work there at the same time.

Startling images showing a broken seal on a store containing the virus strains were published by the state-owned China Daily on Twitter last month before being swiftly deleted.

A picture of the fridge-freezer shows a flimsy loose seal on the door, as a lab worker pulls out a chilled box containing virus samples while wearing gloves and a mask.

US intelligence officials have launched an investigation into the lab and are trying to create “an accurate picture of what happened” – after it was revealed earlier this month that ministers fear the Covid-19 pandemic could have started after a leak from a lab.

President Donald Trump said the US was trying to establish if coronavirus first crossed to humans during the bat tests.

Officials at the Wuhan lab have previously dismissed allegations that coronavirus came from their facility and have called them baseless conspiracy theories. 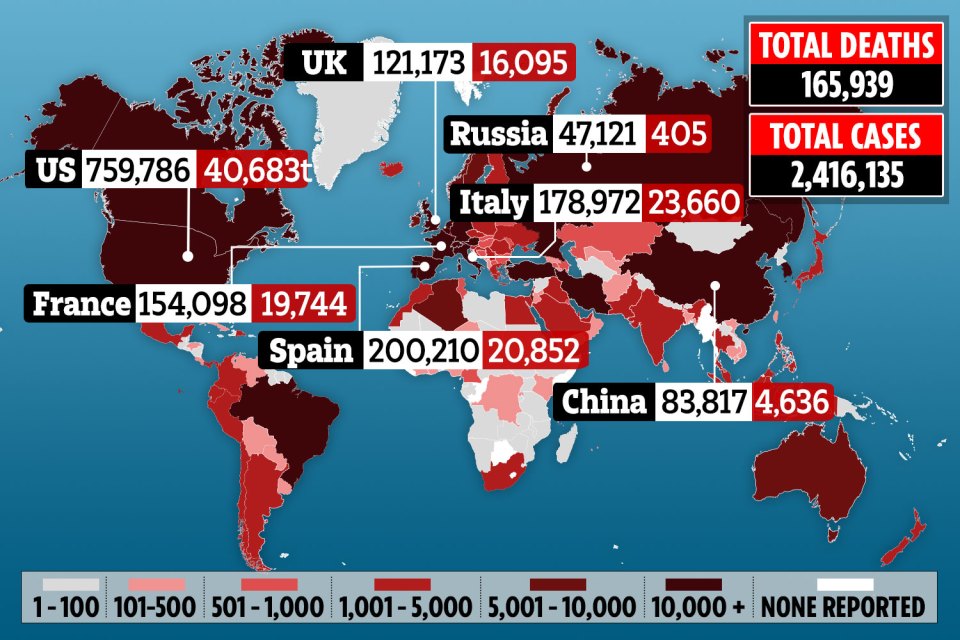 Scientists have said that genetic evidence indicates the virus was not artificially engineered and it had likely originated in bats.

Dr Yuan Zhiming, the deputy head of the Wuhan Institute of Virology, told CGTN: “There’s no way this virus came from us.

He added: “Some scientists believe that to synthesise a virus requires extraordinary intelligence or workload, so I have never believed that we humans have the capabilities at this time to create such a virus.”

Most read in news

Shi Zhengli, a deputy director at the institute, told the press in February that she ‘guaranteed with her own life’ that the outbreak was not related to the lab.

The institute also refuted reports which named Huang Yanling, a researcher at the Institute of Virology, as ~”patient zero” – the first person to be infected.

Covid-19 has killed more than 168,000 people and infected over 2.4 million worldwide since the pandemic began in Wuhan last December.

Factbox: Latest on the worldwide spread of the coronavirus

Cop ‘kept knee on George Floyd’s neck for 3 minutes AFTER...

Factbox: Latest on the worldwide spread of the coronavirus