The Love Island presenter, 40, deliberately took her own life while tormented by a Crown Prosecution Service decision to put her on trial for assaulting her boyfriend, a coroner ruled.

Her mum Christine told the coroner she had got the decision spot on, before issuing a statement alleging Caroline was unfairly treated because she was a star.

She insisted she would still have been alive if prosecutors had stuck to their initial decision to issue a caution for the assault.

She added: “Both the CPS and the police came to this inquest to cover up their part in Caroline’s death.”

Caroline was found dead in her North London flat in February, weeks after she learned she would be taken to court for allegedly assaulting her boyfriend, tennis player Lewis Burton, 28.

Prosecutors had planned to caution her before police appealed and the case was taken to court.

She strongly denied the charges and pleaded not guilty to assault by beating at Highbury Corner magistrates’ court on December 23.

But Christine, in a statement backed by the star’s twin sister, Jody, said: “I fully appreciate that domestic violence needs to always be taken seriously but in this case a one-off incident where minimal contact was made; a minor injury sustained. I don’t believe Caroline was treated as anyone else would have been.

“Why would the CPS and police feel the need to make statements that were not correct?

“I believe it was because they know that the reason this was ­pursued in the way it was had everything to do with who Caroline was and not what she had done. They wanted a show trial.

“As the coroner made clear: celebrities should not be treated better because of their status but ‘they shouldn’t get any worse treatment than anyone else’.

“The family feel very strongly that Caroline had different treatment than she would have had she not been a celebrity.

‘THIS IS NOT TRUE’

“Caroline you were loved. I love you. Those that would have harmed you can’t touch you now.”

She also accused prosecutors of misleading the coroner by insisting no reports of Caroline’s deteriorating mental health were made to them after the initial court appearance in December.

Her statement said: “They said that the ‘last communication’ from Caroline’s legal team that ‘specifically referred to her mental health’ was Dr Garabette’s report made in December. This is not true.

“In January, an abuse application was made by Caroline’s lawyers which specifically set out further concerns for her mental health and the pressure she was under.

“It referenced her self-harming and was the basis upon which it was said that the prosecution was not a proportionate response.”

And she challenged prosecutors’ assertion that Mr Burton had not withdrawn allegations he made in the 999 call. She also questioned the seriousness of his head injury.

She said: “As for the CPS, their view changed from there being nothing serious about this incident to describing the injury sustained by Lewis as ‘serious’.

“As the pictures of that injury shows it was minor, so why did the CPS feel it necessary to justify their actions by claiming the injury was more than it was.

“The coroner said she was struggling to see how the injury could be described as serious. The coroner also felt the CPS approach did not appear impartial and there seemed to be a desire to punish Caroline.”

The inquest at Poplar coroner’s court heard Caroline was found naked and covered in blood with a deep, self-inflicted cut to her wrist when police arrived at her flat after the alleged attack on tennis player Mr Burton.

She told officers: “I hit him. He was cheating on me.”

But Det Insp Lauren Bateman told the inquest Caroline had not made it clear in her police interview what she was admitting to.

‘YOU HAD IT IN FOR CAROLINE’

The lack of a full admission meant the case could not be dealt with through a caution, she said.

However, a report read at the inquest from prosecutor Alison Wright said police had pushed to bring a charge of assault after accusing her of being biased because of Caroline’s celebrity.

After hearing more evidence from the CPS, mum Christine told prosecutor Lisa Ramsarran: “After listening to you and the first lady (Ms Bateman), I feel even more that you had it in for Caroline. I now know how Caroline felt and it is not very nice.

“Thank you, coroner, for allowing us to ask questions today. It’s meant a lot.”

Caroline’s fragile state was also laid bare at the inquest, which had heard from her twin Jody that she had made several previous attempts to overdose.

She said one was before the first court appearance and then a further two times, including the day before she was found dead at her flat in Stoke Newington.

A letter to Caroline’s GP from the psychiatric department of the hospital where she was treated after the alleged assault on Mr Burton was also read to court.

It described how she was “tearful and anxious” and that she “said she had too much to drink”.

It added: ‘The reason for the argument was she saw messages on his phone, texting another girl.

“She said it was an impulsive reaction (to hit him).”

Caroline had told police in a statement: “I admit I did it. I used the phone. I had his phone in one hand and my phone in the other.

“I whacked him round the head. There’s no excuse for it. I was upset.”

Serious cut? I can't see it 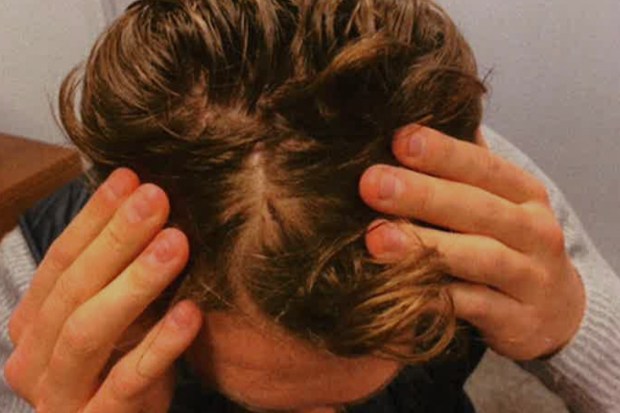 CAROLINE Flack’s family were backed by the coroner when they queried the severity of the injury to her boyfriend Lewis Burton.

Her mother Christine told the hearing Caroline insisted she hit him with her mobile phone and he had a small cut to his head.

When the TV presenter’s phone was seized, it had blood on it and a crack on one of the corners, the inquest heard.

But prosecutors had insisted he was hit with a lamp.

Prosecutor Lisa Ramsarran told the inquest she was satisfied the injury was “at the top end of what you might see”.

But coroner Mary Hassell said: “I’m really struggling to understand how this injury was regarded as significant.”

She also left a note, revealing her insecurities about the case.

The handwritten message was found by a paramedic lying on top of an open magazine on a coffee table near her body.

It read: “Please let this court case be dropped and myself and Lewis find harmony.”

Jody, who was watching the inquest on video link alongside her mum, was asked to confirm if the handwriting was her sister’s.

She said in a statement read in court: “It looks exactly like Caroline’s writing.”

Det Sgt Jonathan Maharaj said there was evidence of “a number of calls” made and received on ­Caroline’s mobile phone, which was retrieved from her flat.

Her web history showed she conducted searches for “people who blame” as well as for information about suicide.

Recording a verdict that Caroline had taken her own life after the two-day hearing, coroner Mary Hassell said: “She acted in a way to take her life. There’s no doubt in my mind whatsoever about that.

“There’s a last question when a verdict of suicide is returned that a family will ask. And that is why? How could you not have that question? Why did she do that?

“To me it seems all the evidence points in the same direction which is that Caroline had fluctuating mental ill health.

“She had struggles in the past and, in spite of the fact she may have led to some what might have been a charmed life, actually the more famous she got the more some of these difficulties increased because she had to cope with the media in a way most of us don’t.

The Love Island star stepped down after being arrested[/caption]

“And when things went wrong for her — and I’m thinking here obviously of the events in December — she didn’t have any privacy.

“She faced the prospect of not working in the job that she loved, of losing a great deal and, although her general fluctuating state was a background and was obviously very important in her death, I find the reason for her taking her life was that she now knew she was going to be prosecuted for certain.

“She knew that she would face the media, the Press, the publicity, it would all come down on her.”

Christine responded: “I totally agree and you have it spot on.

“Anyone who has followed this inquest will get their own conclusions. We know you’re not allowed to say certain things and it’s up to us if we want to take it any further.

“We’re not going to but we think exactly as you think. It’s spot on.”

Ms Hassell replied: “I’m very sorry for the loss of such a young life in such a needless way.”

EVERY 90 minutes in the UK a life is lost to suicide.

It doesn’t discriminate, touching the lives of people in every corner of society – from the homeless and unemployed to builders and doctors, reality stars and footballers.

It’s the biggest killer of people under the age of 35, more deadly than cancer and car crashes.

And men are three times more likely to take their own life than women.

Yet it’s rarely spoken of, a taboo that threatens to continue its deadly rampage unless we all stop and take notice, now.

That is why The Sun launched the You’re Not Alone campaign.

The aim is that by sharing practical advice, raising awareness and breaking down the barriers people face when talking about their mental health, we can all do our bit to help save lives.

Let’s all vow to ask for help when we need it, and listen out for others… You’re Not Alone.

If you, or anyone you know, needs help dealing with mental health problems, the following organisations provide support:

Feds to loosen school corona rules under pressure from Trump

Boris Johnson will call on nations to make big commitments on climate change at...

Toronto ISIS attacker denied parole, says she will 'do another attack' if she is...