A BAN on households meeting indoors in Birmingham, Sandwell and Solihull will come into force next week after coronavirus cases in the area spiralled.

The strict new measures will affect around 1.5 million people when they come into place on Tuesday. 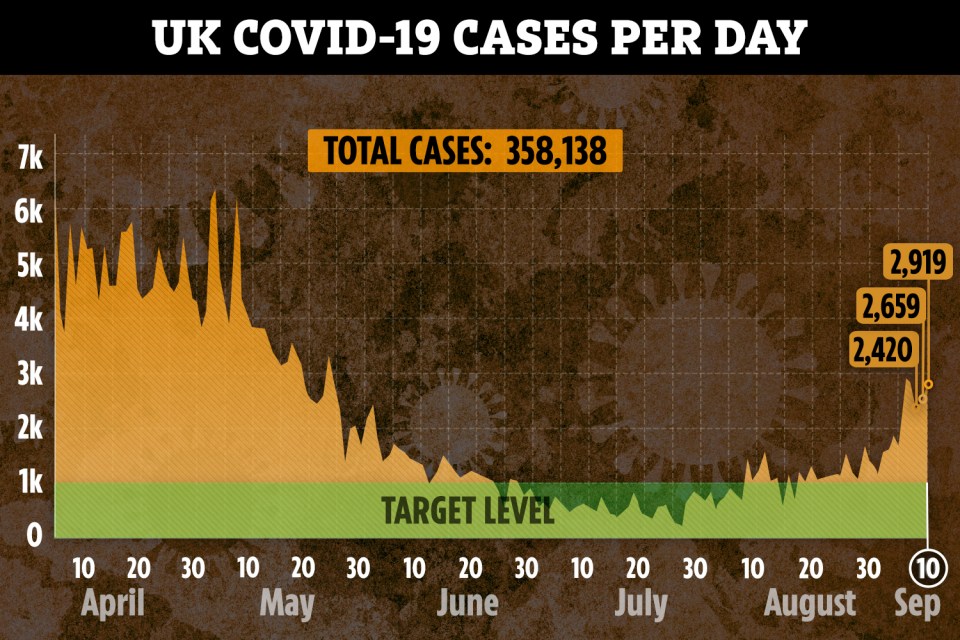 There are currently 68 patients undergoing treatment across Birmingham – and seven of them, aged 40 to 75, are in intensive care in Queen Elizabeth and Heartlands hospitals.

According to NHS Digital data, the latest seven-day infection rate for the city to September 8 showed 78.2 cases per 100,000 with 892 cases over the period – among the highest in Birmingham since April’s peak.

For the previous seven-day period, the rate was just over 30.

It puts Birmingham third in a national table of local authority areas of highest infection rates, behind Bolton and Sunderland.

Bolton’s seven-day rate currently stands at 143 cases per 100,000, and Sunderland is on 84, according to data from NHS Digital.

Dr David Rosser, chief executive at University Hospitals Birmingham (UHB), said that even with local measures, cases are still likely to rise in Birmingham in the next week.

He told Birmingham Live: “Even if we brought in some sort of social measures today to stop the spread completely we would still expect to see cases double in a week – those people have already got it, they just don’t know it yet.

“We have seen hospital admissions double in a week and I expect it to double in the next week again – it’s an exponential curve. We are in the foothills of that curve.”

Dr Mark Garvey, consultant microbiologist and deputy chief of infection prevention and control for the same trust, said cases have gone up from about ten around two weeks ago, to 23 last week, to 68 this week, of which 32 are actively infected.

He warned: “At our peak we had 708 in-patients at one time, of which about one in six were critically ill. We are seeing the same proportion now.”

The city’s director of public health Dr Justin Varney said the uptick in cases was “linked primarily to private household gatherings”, at the end of August and across the bank holiday weekend.

He added that an increase in testing had also turned up more positive results.

Pubs, bars and restaurants flouting contact-tracing rules and social distancing, are also believed to be part of the problem behind rising rates.

The city had previously moved up the rungs of the Government’s Covid watchlist, which ranks local authority areas of concern by infection rate.

It was deemed an area in need of “enhanced support” last month, after recording a seven-day infection rate above 30 per 100,000 people.

Meanwhile, the whole of the Merseyside region was today added to the government’s coronavirus watch list.

Liverpool, Wirral, Sefton, Knowsley and St Helens were all placed on the danger list following a rise in infection rates across the borough, Liverpool Echo reports.

It comes after pubs in Bolton were ordered to shut this week, as the city was plunged into its own local lockdown.


Girl, 17, left to die after gang-rape is raped again by men who found her

Hospitality businesses there are only able to sell takeaways and have to close between 10pm and 5am.

There are concerns Birmingham’s neighbour, Solihull, will also see new restrictions imposed with the latest infection rate for the week ending September 8 standing at 62.8.

Yesterday, the number of coronavirus cases in the UK rose by 2,919 – meaning a total of 358,138 have now been infected with the bug in Britain.

People in Birmingham city centre, an area on the Government’s list of ‘enhanced support’[/caption]

Dream Team: This XI of widely-selected players failed to score a single point in Game Week 1