APPLE boss Tim Cook has entered the billionaire’s club as the iPhone-maker’s surging value puts it a step closer to becoming the first company valued at $2trillion (£1.5trillion). 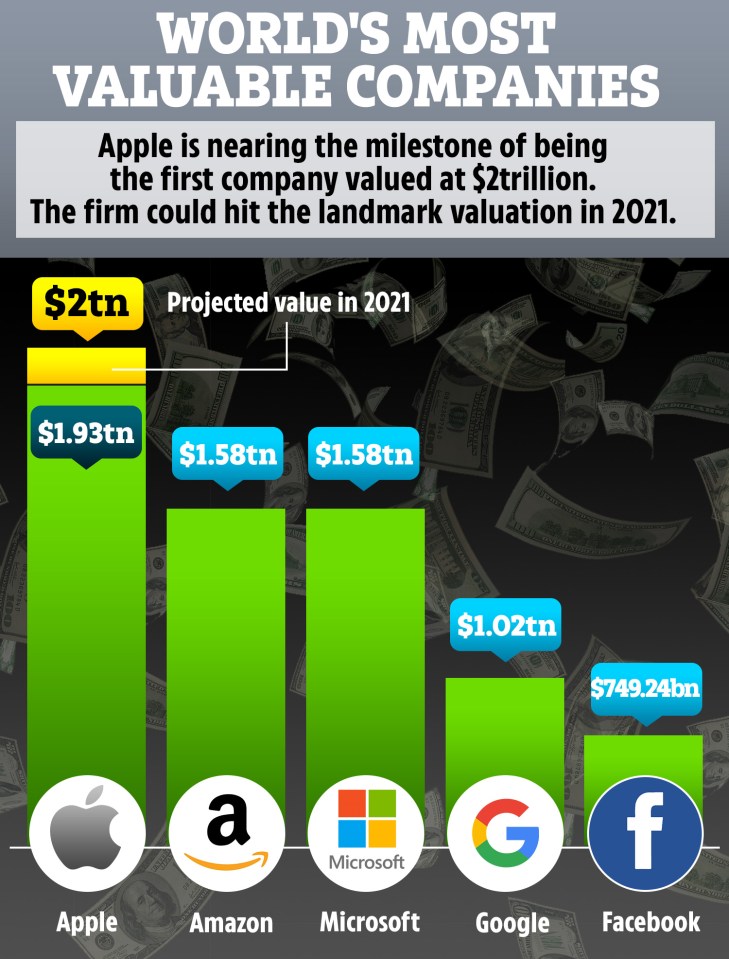 Tech giants like Apple and Amazon have seen their valuations skyrocket during the coronavirus pandemic as more people spend time online.

Cook’s wealth soared in recent months in tandem with Apple’s value, which has risen thanks to boosted sales of iPhones, iPads and apps.

Apple’s share price is up nearly five per cent since the beginning of August.

As a result, Cook, who took over from Steve Jobs in 2011, saw his net worth recently rise to above $1billion, according to calculations by Bloomberg.

The tech boss in on a reported salary of $3million (£2.3million) a year. His net worth is closely tied to the value of Apple shares.

Cook was awarded a fortune in shares after replacing Jobs, who founded Apple in his parents’ basement but tragically died of cancer aged 56.

Cook has previously promised to donate most of his vast wealth to charity.

Cook’s wealth soared in recent months in tandem with Apple’s value, which has risen thanks to boosted sales of iPhones, iPads and apps[/caption]

Apple became the first company valued at $1trillion back in 2018.

Cook is an unusual member of the billionaire’s club as he is not a founder of the company responsible for his wealth.

Who is Tim Cook?

He's a ruthless businessman who rose from humble beginnings to become CEO of the world's most valuable company.

And now Apple boss Tim Cook, 59, is worth a reported $1billion after taking over from founder Steve jobs in 2011.

Cook grew up in the small town of Robertsdale, Alabama.

His father Donald was a shipyard worker, while mother Geraldine was a homemaker.

Cook graduated with a Bachelor of Science in industrial engineering from Auburn University in 1982.

As a student, he developed a system to improve the traffic lights near the college that was so successful it was adopted by the local police force.

This promising early start was followed by the astonishing success which saw Cook work at several tech giants before joining Apple in 1998.

The Alabaman is said to have received a personal invitation from Jobs to join the company.

Following Jobs’ tragic death, Cook was given the reigns and has taken the company from strength to strength.

Like Jobs, he’s reported to rule with an iron fist, sometimes leaving staff “in tears” following meetings, according to The Times.

Cook has overseen the launch of several major Apple products during his nine-year stint, including the Apple Watch and Apple TV+.

Facebook founder Mars Zuckerberg, for instance, was valued at $100billion (£76billion) last week in no small part because he owns nearly 30 per cent of the company’s shares.

Cook’s stake in Apple, by comparison, is tiny at about 0.02 per cent.

He’s overseen the launch of several major Apple products since 2011, including the Apple Watch and Apple TV+.

Most read in Phones & Gadgets

STING BY THE SEA

Microsoft could strike a $30billion deal to buy TikTok in a matter of days, insiders claim.

Billionaire Sir Richard Branson will rocket into space aboard a Virgin Galactic spaceship next year, the company has announced.

Do you think tech giants have too much power? Let us know in the comments!

How to boost your immune system